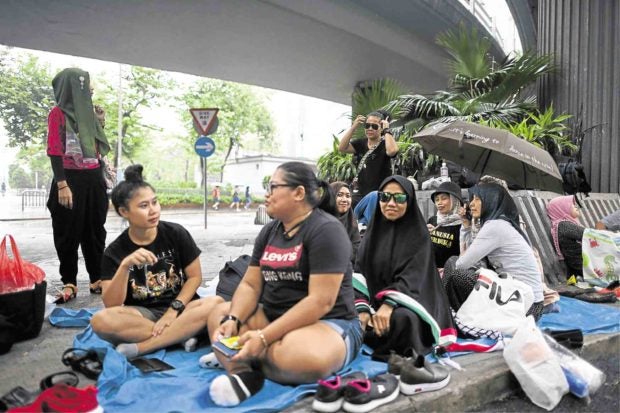 DISRUPTED DAY OFF Indonesian migrant workers in Hong Kong gather at Victoria Park on Oct. 6, their day off. There are more than 370,000 domestic workers, mostly from Indonesia and the Philippines, who keep Hong Kong ticking, often toiling for little pay and living in cramped conditions. Over the last four months, however, their usual rest areas have become battlegrounds between police and prodemocracy marchers. —AFP

HONG KONG—Indonesian migrant worker Jochel usually spends her sole day off in Hong Kong’s parks, chatting with friends and video-calling loved ones back home. But this summer, her downtime keeps getting disrupted by protests and tear gas.

The 35-year-old is one of more than 370,000 domestic workers, overwhelmingly women from Indonesia and the Philippines, who keep Hong Kong ticking, often toiling for little pay and living in cramped conditions.

And over the last four months of huge and increasingly violent prodemocracy rallies, the areas where domestic workers rest on Sundays have frequently become battlegrounds for police and protesters.

“My eyes were very painful,” Jochel said of the first time she found herself caught up in tear gas clouds while having a picnic with friends in Victoria Park.

“This is not good. Hong Kong people also suffered,” she said, adding that black-clad protesters helped her wash her eyes with saline solution and lead her to safety.

Hong Kong has been battered by weeks of prodemocracy protests which have seen millions peacefully take to the streets.

But there have also been increasingly violent clashes between riot police and smaller groups of hardcore activists.

Since June 9, more than 3,000 tear-gas rounds have been fired across the territory on all weekends but one.

Domestic workers earn a minimum of HK$4,630 (US$590) a month and must live with their employers in Hong Kong’s notoriously small flats.

They are only entitled to one day off a week and most take Sundays.

On their day off, Indonesian workers traditionally flock to the Causeway Bay district, while Filipinos tend to gather in nearby Central and Admiralty.

All three have become frequent flashpoints during this summer’s protests.

Sandy, an Indonesian worker, said she would often go hiking with friends on the trails that crisscross Hong Kong.

But now she tends to stay closer to her employer’s home, fearful that the weekend clashes will disrupt transport and leave her stranded.

“We try to stay away for our own safety,” Sandy added, recalling how she first encountered tear gas when she was stuck between demonstrators and police in Central, and there were no subway services.

The protests were initially sparked by a now-shelved extradition law but have morphed into calls for greater democracy and police accountability.

Violence on both sides has escalated, with police firing live rounds and hardcore protesters wielding petrol bombs and rocks.

Yet despite Hong Kong’s uncertain future, many domestic helpers said they had no plan to leave any time soon.

“Our employers still need us and we also still need the job,” said Sandy, who is financially supporting her parents back in Indonesia.

Last month, Veby Indah, an Indonesian journalist, suffered permanent blindness in one eye which was hit by a police plastic baton round.

Indah was working for Suara, a free Indonesian language newspaper in the city which caters to the domestic helpers.

Many in the community were furious about the injury but felt unable to say so publicly.

“I’m scared of trouble,” explained Marsanah, a helper who has been in Hong Kong for three years, who wanted to protest over Indah’s injury but feared falling foul of the authorities.

Eni Lestari, chair of the Network of Indonesian Migrant Workers, said many helpers felt the same way in a city where losing their job results in a sudden loss of their visa.

“If you are seen joining something in relation to the Hong Kong protests, there is a big possibility that we can’t work in Hong Kong anymore,” she told AFP.

Her network had planned to hold a rally in support of Indah on a Sunday, but they had to cancel it as it coincided with a local prodemocracy protest.

They later rescheduled the event to a weekday outside the Indonesian Consulate General calling for Jakarta to pressure Hong Kong authorities to investigate, identify and prosecute the police officer who shot Indah.

Lawyers for Indah say they plan to launch a private prosecution after police refused to identify the officer that fired the shot.

“What the Indonesian government is doing now is not enough,” a domestic helper at the protest who identify herself as Sringatin told AFP. “Just asking our community to pray and stay calm is not enough.”