Kim Jong-un says pain caused by US turned to rage 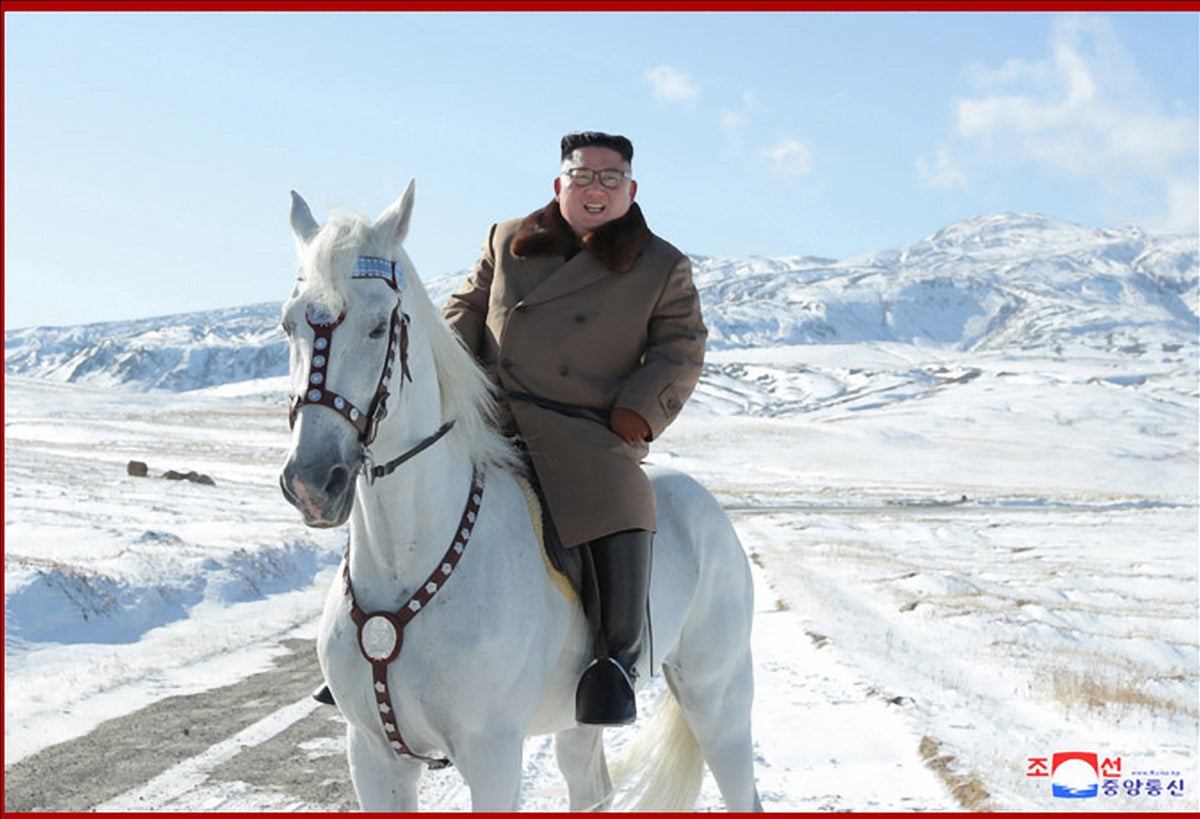 Visiting upper Samjiyon County — the birthplace of his father and predecessor Kim Jong-il, according to North Korea — Kim said the pain the US is causing his people has turned to rage. He also stressed self-reliance.

Releasing photographs of Kim on the back of a white horse on a snow-covered mountainside, the state-run Korean Central News Agency provided a detailed description of the leader in English.

“His march on horseback in Mt. Paektu is a great event of weighty importance in the history of the Korean revolution,” KCNA wrote.

“He, sitting on the horseback atop Mt. Paektu, recollected with deep emotion the road of arduous struggle he covered for the great cause of building the most powerful country with faith and will as firm as Mt. Paektu.”

Kim was accompanied by senior officials of the central committee of the ruling Workers’ Party of Korea, the KCNA said.

In a separate article published the same day, the KCNA reported that Kim had visited Samjiyon County to provide guidance on a construction site in the final stage of the project’s second phase.

There, Kim stressed the importance of the North’s own efforts for prosperity and self-reliance in a time of disturbances from outside forces.

“Saying that the pain the US-led anti-DPRK hostile forces inflicted upon the Korean people is no longer pain, but it turned into their anger, he stressed that whenever the enemies try to strangle us with the chain of pressure, we should pave the way with our own efforts to continue to live well under the banner of the great spirit of self-reliance so that the enemies feel a pain in their stomach and head.”

DPRK refers to the official name of North Korea, the Democratic People’s Republic of Korea.

Kim’s visits to Samjiyon and Paektusan, considered the spiritual birthplace of the country, have often come before making major decisions. Experts here view Kim’s trip as being carefully designed to send a strong message to the US, as their working-level talks on denuclearization in Stockholm failed earlier this month.

“The detailed and dramatic description of Kim ‘thinking’ on the mountaintop appears to deliver the message of a start of a new operation, which may pressure the US,” said Hong Min, a research fellow at the Korea Institute for National Unification.

“It appears to be trying to make viewers imagine the North taking a ‘new way,’ or possibly launching an intercontinental ballistic missile.”

The US and North Korea held a working-level meeting in Stockholm earlier this month on denuclearization, but failed to reach an agreement with Pyongyang criticizing the US for not bringing a new proposal.

Hong also said the next meeting of the two sides for negotiations is unlikely if the US does not come up with measures to satisfy the North, such as guaranteeing regime security and sanctions relief.

Kim’s trip to Paektusan also comes as a “preemptive” move to pressure the US to meet its demands, said Shin Beom-chul, director of the Center for Security and Unification at the Asan Institute for Policy Studies.

“Kim could have gone to the mountain after the deal completely breaks down. But it can be seen that he wants the negotiation to work (out) with the US, and that he is desperate,” Shin said.