VANCOUVER, British Columbia – The weed is expensive, the selection is limited, the black market persists, and licensed stores are scarce.

It’s one year into Canada’s experiment in legal marijuana, and hundreds of legal pot shops have opened. While many residents remain proud of Canada for bucking prohibition, a lot still buy cannabis on the sly, because taxes and other issues mean high-quality bud can cost nearly twice what it did before legalization. 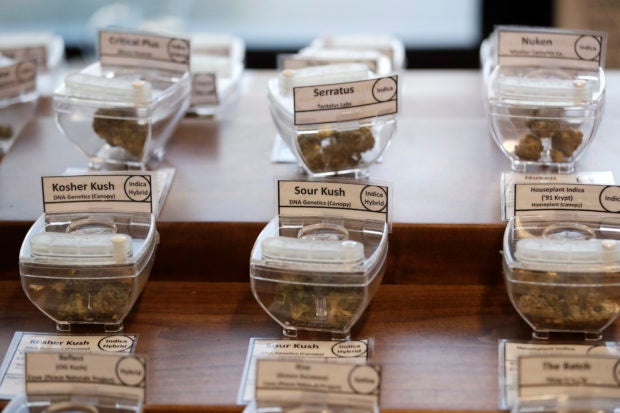 In this Wednesday, Oct. 9, 2019 photo, samples of marijuana, in tamper-proof containers that are secured with cables, are displayed at Evergreen Cannabis, a marijuana retail shop, in Vancouver, B.C. The nation has seen no sign of increases in impaired driving or underage use since Canada joined Uruguay as the only nations to legalize and regulate the sale of cannabis to adults _ those over 19 in most Canadian provinces. (AP Photo/Elaine Thompson)

Much of the drug’s production and distribution over the years has been controlled by outlaw groups, including the Hells Angels, and replacing such criminality with safe, regulated sales is a key goal of legalization.

Yet legal sales in the first year are expected to total just $1 billion, an amount dwarfed by an illegal market still estimated at $5 billion to $7 billion.

“One customer told me, ‘I love you and I want to support you, but I can’t buy all my cannabis here. It’s too expensive,'” said Jeremy Jacob, co-owner of Village Bloomery, a Vancouver pot store that feels more like a museum gift shop, with its high ceilings, graceful lighting, tidy wooden shelves and locked white cabinets hiding packages of marijuana. “The black-market producers are being well rewarded by legalization.”

The nation has seen no sign of increases in impaired driving or underage use since it joined Uruguay as the only countries to legalize and regulate the sale of cannabis to adults — those over 19 in most Canadian provinces. Delegations from other countries, including Mexico, have visited Canada as they explore the possibility of rewriting their own marijuana laws.

But officials promised legalization would be a process, not an event, and they weren’t wrong. Kinks abound, from what many consider wasteful packaging requirements and uneven quality to the slow pace of licensing stores and growers across most of the country.

Canada allowed provinces to shape their own laws within a federal framework, including setting the minimum age and deciding whether to distribute through state-run or private retail outlets. Some have done better than others.

The result: There now are more than 560 licensed stores across Canada, but more than half are in Alberta, the fourth-largest province.

Ontario and Quebec, which together make up two-thirds of Canada’s population, have only about 45 shops between them. In Newfoundland, Canada’s easternmost province, pot shop owner Tom Clarke said he’s about to hit $1.5 million in sales but isn’t making any money, thanks to rules that limit him to just an 8% commission.

Online sales, designed to ensure far-flung communities can access the market even if they don’t have a licensed shop, have been underwhelming, at least partly because consumers are reluctant to pay with a credit card if that transaction might come to the attention of U.S.-based banks or border guards, said Megan McCrae, board chair of the Cannabis Council of Canada industry group.

Nowhere are the challenges of legalization more pronounced than British Columbia, which has had a flourishing cannabis culture since U.S. military draft-dodgers settled there during the Vietnam War era. They grew what became known as “B.C. Bud,” high quality marijuana cherished by American consumers.

In Vancouver, which has 2.2 million residents and is Canada’s third-largest city, there was tacit approval of marijuana even before legalization. Though storefront distribution of medical marijuana never was allowed by law, about 100 dispensaries operated in the city before legalization arrived.

Around the province, authorities have visited 165 illegal dispensaries in the past year and warned them to get licensed or shut down. Despite some raids, the government has been reluctant to close them all before more licensed shops open.

Licensing has been glacial, though, thanks to a change in power in the provincial government and cities being slow to approve zoning and other requirements, partly because the province has no tax-revenue-sharing agreement with local jurisdictions. Regulatory hurdles have also made it tough for B.C.’s many small growers to be licensed; instead, production is dominated by large corporations churning out pot by the ton from massive greenhouses.

Regulators hoped to have 250 legal shops operating in British Columbia by now; instead, they have only about 80 private stores and seven government-run shops. Through July, legal sales in B.C. were a meager $25 million. Alberta, with a smaller population, hit $145 million.

“Everybody still uses their neighbors and their backyards,” said Susan Chappelle of the British Columbia Independent Cannabis Association.

Nevertheless, the legal market has fans. Vancouver resident Sarah Frank, who used to grow her own marijuana plants, loves that she can walk into a clean, welcoming, legal shop and walk out with a few grams of her favorite cannabis, actor Seth Rogen’s Houseplant Sativa brand.

“You don’t feel like a criminal,” said Frank, 41. “I have friends who can’t travel to the States because 20 years ago they got busted with a joint.”

Some who want to get into the legal business are still waiting. With legalization looming last year, Chris Clay shut down his gray-market pot shop on Vancouver Island for what he thought would be a few months, eager to apply for a license and reopen. A year later, he’s still waiting.

Some of his workers went on unemployment and eventually found jobs elsewhere. He’s barely avoided bankruptcy, and though local officials have finally started handling applications, he says it will likely be another three to six months before he’s back in business.

“Everyone’s watching us,” he said. “If anything goes wrong here, we’re screwing it up for the whole world.” /gsg

Gillies reported from Toronto. Gene Johnson, who reported from Seattle, is a member of the AP’s marijuana beat team and can be followed at https://twitter.com/GeneAPseattle. Follow AP’s complete marijuana coverage: https://apnews.com/Marijuana