Cleanbodia produces cassava eco-bags to reduce plastic use in Cambodia 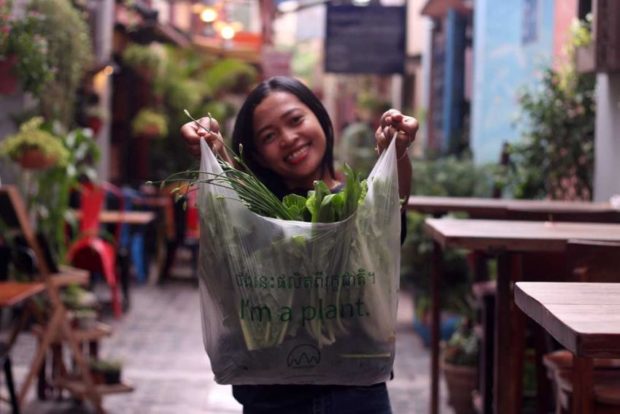 PHNOM PENH — When he first arrived in 2014, Japanese-American entrepreneur Kai Kuramoto heard tourists say that Cambodia is a beautiful country, but they were frustrated by the rubbish littering the streets.

Founder of Cleanbodia, an organization concerned with waste reduction in the Kingdom, Kuramoto told The Post: “Plastic bags are among the biggest source of littering in the Kingdom, so we set out to find a sustainable solution.”

Kuramoto and his team eventually came up with the idea of creating a biodegradable bag made of natural matter, naming it “I’m a plant”.

“After researching the types of biodegradable bags we could produce, we decided that a starch-based product was necessary as opposed to a bag with a chemical additive.

“As cassava is grown throughout Southeast Asia, it made sense to use cassava starch due to its accessibility and cost,” said Kuramoto.

He said the “I’m a plant” eco-bags are lightweight and as strong as plastic bags.

“Our biodegradable bags are as strong as regular plastic but they don’t have the chemical feel and smell that plastic often has. They can hold hot or cold liquids, but if stored in wet conditions for a long period, they will start to degrade,” said Kuramoto.

The company is striving to bring more environmentally-friendly solutions to Cambodia and the world.

“Cleanbodia started in 2015 as a small project to see if biodegradable bags could be introduced into the Cambodian market. We have researched, designed, marketed and distributed biodegradable bags all over Cambodia, as well as internationally,” Kuramoto said.

Before Kuramoto came to Cambodia, he was a national event manager who managed conferences and conventions around the US, and had not thought of running a business at that time.

But when arrived in Cambodia, Kuramoto started to think about starting an environmentally friendly business of his own.

“Our main goal is not to replace plastic bags but to drastically reduce our dependence on products that harm our environment.

Biodegradable bags are better for our ecosystem because the raw material can be regrown, unlike oil or natural gas.

“They also degrade in about six years, which is at least 200 years quicker than a regular plastic bag,” he said.

The Siem Reap resident has previously said the “I’m a plant” message written on the bags is intended to make people think of where it comes from.

Due to the complicated process of producing biodegradable bags, which requires expensive machinery, Kuramoto and his team of engineers went through a lot of trial and error.

“Currently, the bags are not produced in Cambodia, but are made in Southeast Asia. We have studied the possibility of building a factory here in the Kingdom and are still assessing the best way to do that with the right partners.

“Production here would allow for cheaper biodegradable bags and there is certainly enough cassava grown to supply the production of the bags.

“It would also be a great export for Cambodia as we have received inquiries from all over the world wanting our biodegradable bags. I think this would be something Cambodians could be proud of,” he said.

Despite their reputation for being more expensive than regular plastic bags, Kuramoto believes that in the long run biodegradable bags pay for themselves.

“Everyone prefers a cheaper product. But, traditional plastic bags aren’t necessarily cheaper than a biodegradable bag. The cost of using and disposing of plastics will be incredibly high when we need to remove them from our environment and try to repair the damage caused to our ecosystem,” Kuramoto explained.

“Market sellers in Cambodia often cannot afford more costs and research has shown that they prefer to use plastic bags to attract customers because it is ‘clean’.

“Vendors are stuck, however. There needs to be a way to subsidise alternatives to make them more affordable and shoppers should push vendors to use more green products,” he said.

Kuramoto is currently focused on reducing plastic bag use, as they make up almost 20 percent of the Kingdom’s waste produce, ending up in landfills.

Kuramoto is working with a handful of groups, such as GoGreen Cambodia and Plastic Free Southeast Asia, to help promote solutions to plastic pollution for hundreds of organizations.

“Eventually, everyone will need to change their habits regarding plastic usage. It’s not sustainable and is already starting to choke our oceans. However, how fast can that change happens depends on a large cultural shift away from mass consumption,” he said.

Although many people see that bio-bags are eco-friendly, Kuramoto recognises that getting people to actually change their behavior is hard.

“A big challenge here is that many people I talk to know that plastic is bad but don’t change their behavior. This has to do with the lack of alternatives which is where I think the government can make a big impact and show the world that Cambodia can be a model country for its green initiatives,” he said.

“The current sub-decree [announced in August on single use plastic bags] is a great first step to reducing plastic pollution and I am excited to see what the Ministry of Environment does in the future.”

Kuramoto said he will continue to research the market and look for opportunities to replace traditional plastic bags.

“We will also assess potential partners in building a production facility,” he added.