BARCELONA, Spain – Violent clashes erupted for a second night in Barcelona between police and protesters angry about the conviction of a dozen Catalan separatist leaders, as Spain launched an investigation Tuesday into an activist group organizing the demonstrations. 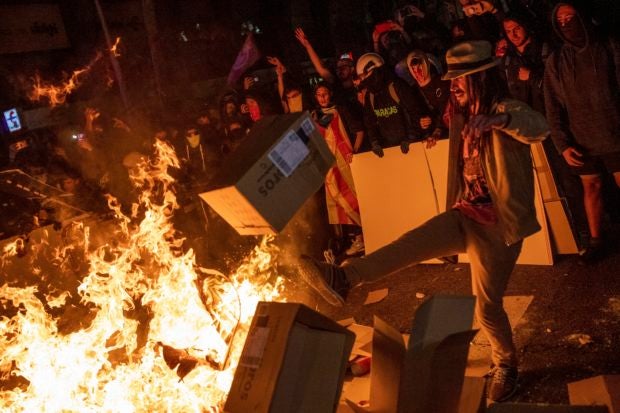 Protesters throw cartons to a burning barricade during clashes with police in Barcelona, Spain, Tuesday, Oct. 15, 2019. Spain’s Supreme Court on Monday convicted 12 former Catalan politicians and activists for their roles in a secession bid in 2017, a ruling that immediately inflamed independence supporters in the wealthy northeastern region. (AP Photo/Bernat Armangue)

Thousands of people held vigils near the Spanish government offices in Catalonia’s four provinces. But the gatherings turned into melees, with protesters hurling firecrackers and other objects at anti-riot officers and kicking temporary fences around the official buildings.

In Barcelona, protesters sang the Catalan anthem and shouted “The streets will always be ours” and “Independence,” while they called Spanish police “occupying forces” and urged them to leave Catalonia. Demonstrators erected improvised barricades with trash bins, fences and piles of cardboard that they set on fire.

The greatly outnumbered riot police went in with shields and batons striking protesters in their path. They hit people on the legs mostly and fired foam-type anti-riot bullets that dispersed the crowds.

There were also clashes in Girona, Lleida and Tarragona as well as smaller towns across Catalonia.

In a statement late Tuesday, the office of the Spanish prime minister said protesters were causing “damage” and “vandalism,” and accused “groups who use street violence to break coexistence in Catalonia” of coordinating the rioting.

Most impromptu protesters were responding to an online campaign by Tsunami Democratic, a loose, leaderless grassroots group that uses encrypted messaging apps to call for peaceful disobedience.

Vigils on Tuesday evening were initially called by ANC and Omnium, two grassroots pro-secession groups whose leaders Jordi Sánchez and Jordi Cuixart were sentenced Monday to nine years in prison for sedition.

In written answers to questions sent to Sánchez in prison, the activist-turned-politician defended the non-violent nature of the Catalan independence movement.

“The risk of frustration is always there among certain people when there is a movement so big of millions,” Sánchez wrote. “But I don’t see any future for violence. We don’t practice it, nor do we defend it.”

Seven politicians were also given prison terms of around a decade in Monday’s Supreme Court ruling and three more were fined for disobeying the laws as they pushed ahead with a banned referendum on Oct. 1, 2017, and briefly declaring independence based on its results before Spain crushed the defiance.

On Tuesday, protesters also blocked highways, smaller roads and railway tracks for brief periods following an attempt to besiege Barcelona’s international airport Monday night that left thousands of travelers stranded. Many, desperate to catch their flights, were forced to walk with their luggage on highways and across fields.

Officials said six people had been arrested — three on Monday and three on Tuesday. More than 170 people were reported injured, including about 40 police officers and a protester who lost an eye.

The court’s ruling Monday also barred the 12 convicted Catalan separatists from holding public office. That has an immediate impact in the upcoming Nov. 10 Spanish election because six of them were planning to run as candidates to the national parliament.

The verdict is likely to be a central issue in the election campaign but “it is unlikely to substantially alter the electoral outlook unless the situation worsens significantly in the region,” said Antonio Barroso, a political risk analyst with the London-based Teneo consulting firm.

He said Catalan separatist politicians wanted to use the backlash against the ruling to woo pro-independence voters to the polls. /gsg