QUITO, Ecuador – President Lenín Moreno survived the toughest political crisis of his presidency by negotiating an end to indigenous anti-austerity protests. Now he faces an even tougher challenge. 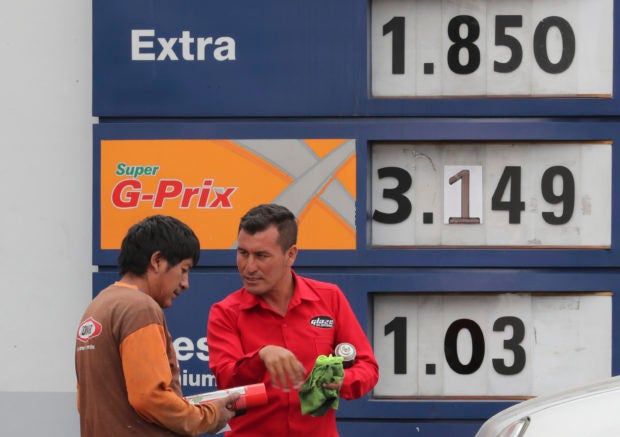 An attendant shows an automotive product to a driver in front of a display with new fuel prices at a gas station in Quito, Ecuador, Tuesday, Oct. 15, 2019. The recent strike that paralyzed the Andean nation for almost two weeks, has left a gaping hole in Ecuador’s economy, this after President Lenin Moreno called back his elimination of fuel subsidies which provoked the violent protests. (AP Photo/Dolores Ochoa)

Ten years of populist rule and a drop in oil prices have left Ecuador with a $64 billion public debt, which is more than half the gross domestic product, and the government has a $10 billion annual budget shortfall, about a third of the entire budget. Moreno persuaded indigenous protesters to return home Sunday night by restoring fuel subsidies that cost the government $1.3 billion a year.

The streets were calm Tuesday afternoon, but Moreno and his administration were struggling to figure out how to stabilize the budget, reassure international lenders and put Ecuador on a path of economic sustainability.

The indigenous protests have robbed Moreno of the ability to make deeply unpopular cuts in subsidies and social benefits that cost the country billions annually. Because Ecuador switched to using the dollar two decades ago, when it was on the brink of hyperinflation, it is hard to compete against countries with exports priced in cheaper currencies.

The protests of the last two weeks were themselves a grave blow to Ecuador’s economy, costing it $2.3 billion in lost productivity, spoiled goods and reduced oil production, according to the Industrial Chamber of Guayaquil, the country’s most important economic center.

“Public finances are in a sort of stranglehold,” said Jaime Carrera, an analyst at the Quito-based Center on Fiscal Policy. “If there’s no way to raise taxes or eliminate subsidies, the only other option is reducing the state budget, laying off public employees and investment, and that’s not viable either.”

Without a drastic improvement in 2020, Ecuador may have to start delaying payments to state workers and suppliers, Carrera said.

Fernando Martín, an economic analyst at the Latin American Faculty of Social Sciences in Quito, said that for the moment government would be forced to keep taking on debt at high interest rates in order to keep functioning.

“In the current situation it doesn’t look like there are many alternatives,” Martín said.

The International Monetary Fund forecast Tuesday that Ecuador’s economy would contract 0.5% this year after growing 1.4% in 2018. The projection, made before the protests, was that the economy would expand 0.5% in 2020.

Ecuador joins Argentina, Barbados, Nicaragua and Venezuela as the only countries in the Western Hemisphere projected to have shrinking economies in 2019.

The IMF welcomed the Sunday night deal, and Norman McKay, a Latin American research analyst with the Economist Intelligence Unit, said he doesn’t think a three-year $4.2 billion IMF credit line is at risk, despite being contingent on Ecuador’s ability to implement austerity measures. /gsg