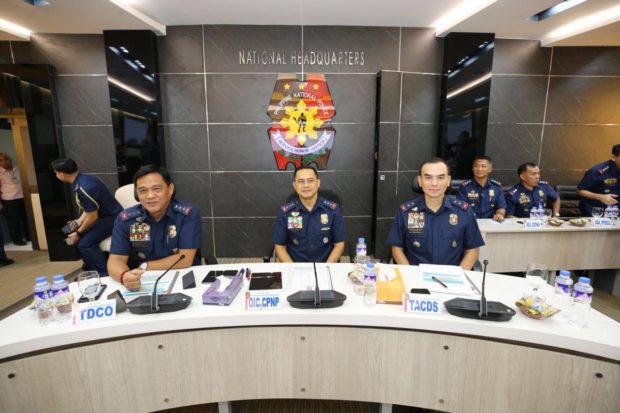 (From left to right) Lt. Gen. Camilo Cascolan, Lt. Gen. Archie Gamboa, and Maj. Gen. Guillermo Eleazar — three contenders for the PNP chief post — pose for a photo during a command conference at Camp Crame on Tuesday, October 15, 2019. It was the first command conference presided by Gamboa as OIC of the PNP. Photo from PNP-PIO

MANILA, Philippines — A day after assuming post as officer-in-charge of the Philippine National Police (PNP), Lt. Gen. Archie Gamboa on Tuesday presided for the first time a command conference of top police officials.

Speaking over ABS-CBN News Channel moments before the command conference at Camp Crame in Quezon City, Gamboa said he wanted the meeting to be different from the “usual format of briefing” and instead turn it into “pure brainstorming.”

He added that he wants to get input from other police officials on how to convince ground officers to “move on,” after Gen. Oscar Albayalde, who had just vacated the PNP chief post, found himself entangled in the heated controversy on “ninja cops.”

“Probably we solicit from different commanders on how we should do these things because as OIC, I cannot do that alone. I have to get very good ideas on how to go about this,” said Gamboa, who had just become the PNP deputy chief for administration or the second highest post in the police force on October 12.

The PNP holds a command conference of the command group, all regional directors, national support units, and major directorial staff of the organization whenever there is a need to do so, or during urgent matters or preparations for big events.

Another command conference of senior police officials is scheduled this afternoon in Malacañang to be presided by President Rodrigo Duterte, according to PNP spokesperson Brig. Gen. Bernard Banac.

Gamboa, meanwhile, admitted that convincing rank-and-file personnel to not be further affected by issues hounding the PNP is a “very big challenge,” and that the morale of the organization was really affected by the issue concerning no less than its former chief.

“First, you we have to convince our personnel, the PNP as an organization, [then] second, go to the public and tell them ‘Look, the PNP is still a very good police force and we can do our mandate.’ So that’s how it’s going to be,” he said.

“Commanding them to trust the PNP is one thing, but proving them that they should trust the PNP is another,” added Gamboa, who is also one of the candidates to become the 23rd chief of the PNP, a much-coveted post set to be occupied in the coming weeks.

As for the drug war, Gamboa said the government is still “winning” the campaign and that the controversy on drug recycling might only be a “temporary setback” and is a mere “isolated case.” He said the PNP will “regain its stance” and continue fighting the drug menace.  /muf