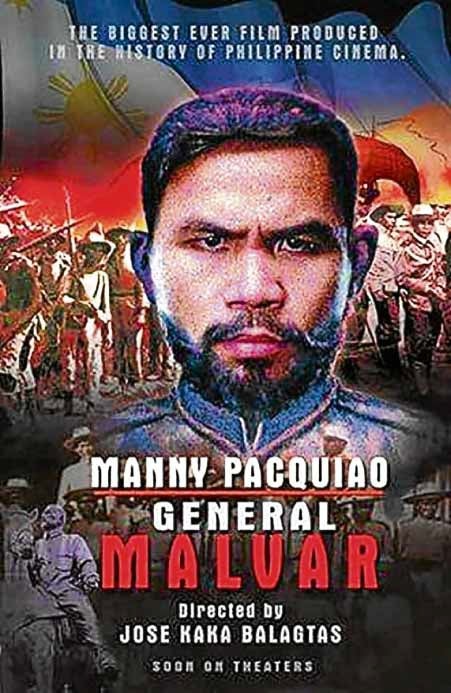 A poster of the biopic “General Malvar”

SAN PEDRO CITY, Laguna, Philippines — The biopic on Gen. Miguel Malvar, who will be played by Sen. Manny Pacquiao, isn’t meant to further the boxing icon’s political agenda, according to the hero’s grandson who is producing the movie.

If at all, “General Malvar” seeks to shine a light on American atrocities during the Philippine-American War, said Jose Malvar Villegas Jr. of JMV Film Production.

The movie has generated an online storm, with a great-grandson of Malvar objecting to the “larger than life” Pacquiao playing the lead role.

Singer Imelda Papin will be the line producer.

“It’s not for any political propaganda,” Villegas, son of General Malvar’s daughter Isabel, said in defense of his decision to cast the boxing legend in the title role in “Malvar,” a P100-million production that has begun filming in the hero’s home province of Batangas south of Manila.

He said he had heard of speculations that Pacquiao might run for higher office in 2022 and use the movie as a political vehicle.

“That’s a wrong perspective,” Villegas told the Inquirer by phone. “In the first place, he’s an actor and has appeared in several movies. This is an entirely different field from politics. There’s no political undertone.”

A relative, Gabriel Malvar, has come out online to object to the production that, he says, lacks the “express consent of the entire clan” and to the casting of Pacquiao whose popularity he said might overshadow Malvar’s character on screen.

“This caught us by surprise,” Gabriel, grandson of Malvar’s youngest child Pablo and himself a director, wrote on Facebook, referring to the direct descendants who were neither informed nor consulted about the biopic.

Of Pacquiao, Gabriel said he would have preferred someone outside of politics and public service to portray the general, who he said declined offers to sit as Batangas governor and head the Philippine Constabulary after the Philippine-American War in favor of a quiet civilian life on his farm.

“He is an icon. A global brand,” he said of Pacquiao. “My fear is that he is larger than life and his character cannot be separated from Manny Pacquiao the person. If he plays Lolo Miguel, the viewers will not be able to see and appreciate my grandfather. Senator Pacquiao’s personality will dominate.”

“To have a film about my Lolo Miguel would be ideal. But a film, although desirable, if not executed well and taints his legacy, would do more harm than good. I would prefer not to have a film at all,” he added.

Pacquiao’s staff declined to comment, saying they would defer to Villegas’ statement.

Villegas said Pacquiao wasn’t even his first choice for the lead role. He initially eyed Cesar Montano, who played Rizal in a 1998 Marilou Diaz-Abaya film, for the role but dropped the idea after the actor got entangled in a controversy over a government tourism project.

“It’s even an honor for a senator [to accept the role],” he said, sounding excited at the prospect of the popular boxing champ drawing the crowds to movie theaters. It is set to be shown in six months.

Villegas said he did not see the need to obtain the consent of the Malvar clan since heroes’ life stories are considered public material.

Alvin Alcid, division chief for research of the National Historical Commission of the Philippines (NHCP), said his office respected the “artistic freedom” of filmmakers and writers. The NHCP, however, does not endorse historical films, he said.

Villegas said “Malvar” had long been planned, but they found the “space” to push through with it under the present administration.

He was quick to clarify this was not exactly “anti-American,” but only sought to “correct history (on) what the people should know about the (number of Filipino civilian) casualties during the war.”

Villegas said Pacquiao was scheduled to shoot his part between October and November, given the senator’s “limited” availability.

“The senator has a keen memory. We can do workshops (to work on his Batangueño accent),” he said of Pacquiao, who hails from General Santos City in Mindanao.

“In fact, I’ve tested him already (in saying) ‘ala eh!’ (a popular Batangueño expression). Kayang-kaya,” he added.

Pacquiao would be paid his talent fee, which Villegas chose not to disclose.

“The bashers are only making the movie popular we might end up beating ‘Hello, Love, Goodbye’ as the top grossing film,” Villegas said.