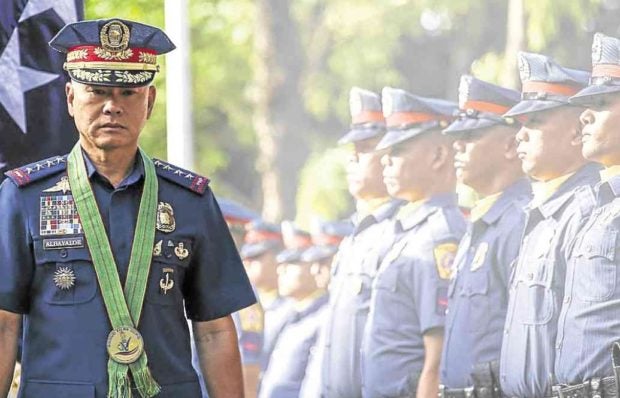 CARRY ON Sen. Christopher “Bong” Go says President Duterte has not lost trust in Gen. Oscar Albayalde, but just wants the Philippine National Police to be able to do its job without “any baggage to carry.” —JAM STA. ROSA

MANILA, Philippines — Sen. Richard Gordon on Monday said it would be a “national disappointment” if President Rodrigo Duterte allowed former Philippine National Police chief Gen. Oscar Albayalde to go scot-free despite damaging evidence linking him to “recycling” confiscated drugs, an allegation that has put in question the government’s antinarcotics campaign.

Amid allegations of protecting policemen accused of selling a huge haul of seized “shabu” (crystal meth), Albayalde stepped down on Monday, three weeks ahead of his retirement.

“After careful thought and deliberation, I have come to the decision to relinquish my post as chief PNP effective today and go on nonduty status. Since I am retiring compulsorily on Nov. 8, this will pave the way for the appointment of my replacement,” he said in a speech during a flag-raising ceremony at PNP headquarters in Camp Crame, Quezon City.

“Nonduty status” is the equivalent in the PNP of terminal leave.

Police Brig. Gen. Bernard Banac said this was the first time a PNP chief had gone on terminal leave.

And because he had already stepped down, Albayalde may no longer be given retirement honors, which had been scheduled for Oct. 29, Banac said.

A “simple” turnover ceremony was held on Monday, with Interior Secretary Eduardo Año overseeing the assumption of Lt. Gen. Archie Gamboa, the PNP deputy chief for operations, as officer in charge.

“[The President] did not ask him to resign, but just to take a terminal leave,” said Go, the President’s former longtime aide.

Go said the President relayed his advice to Albayalde through Año during a meeting between the President and the home affairs chief early on Saturday.

He said Año and Albayalde met on Saturday afternoon, and on Sunday, Albayalde sent a letter to Malacañang informing the Palace that he was going on terminal leave until his retirement on Nov. 8.

The senator said the President had not lost trust in Albayalde. “He just wants the PNP to buckle down to work without having any baggage to carry,” Go said.

But in his speech on Monday, Albayalde said he informed Año of his decision to step down during their discussion over the weekend of the Senate investigation of the pilfering of seized drugs by rogue policemen, who sell these back on the black market.

His early departure came days after two former police officials implicated him in a raid in Pampanga in which 13 officers allegedly seized and then sold parts of a large haul of shabu in November 2013, when he was the police chief of the province.

Benjamin Magalong, a former chief of police for criminal investigation and now mayor of Baguio City, testified that Albayalde protected the officers from dismissal, while Rudy Lacadin, Magalong’s former deputy, told the Senate inquiry that Albayalde admitted receiving “just a little” from the drug haul.

Albayalde has vehemently denied the allegations, and warned the witnesses that he will take legal action against them.

In his speech on Monday, Albayalde insisted on his innocence, saying the allegations of the witnesses “were apparently inspired by the publicity [that had] accompanied the Senate investigation.”

But Gordon, chair of the Senate blue ribbon committee that is investigating the scandal, on Monday said the inquiry had gathered enough evidence to prompt the President to order the Department of Justice to bring complaints against Albayalde and the 13 policemen.

“As far as I’m concerned, this is a good opportunity for the President to make a clean breast of it all and to show that he doesn’t protect anyone, even uniformed personnel, when it comes to the issue of corruption,” Gordon said.

Asked what would happen if Albayalde would not be indicted like other government officials who quit while facing corruption charges, Gordon said: “That will be a national disappointment.”

Gordon said Albayalde’s departure would not stop his committee from pursuing its investigation.

Albayalde relinquishing his post is not a pass for him to skip the Senate inquiry, Gordon said. “I think the people will not allow them to go unpunished. That’s why the blue ribbon [committee] will continue the investigation,” he said.

Senate Minority Leader Franklin Drilon said Albayalde could still be held liable for his actions even after stepping down.

“Rather, this is an important development in the people’s quest for truth, justice and accountability,” Hontiveros said in a statement.

Militant lawmakers on Monday said Albayalde’s decision to step down was intended to contain the fallout from the Senate investigation.

“They are trying to minimize the damage that General Albayalde’s involvement had done, which is why he was let go earlier. Malacañang officials may have talked to Albayalde over the weekend for him to resign and ‘take one for the team,’ as they say,” Gaite said in a statement.

He noted that Albayalde had been adamant about staying until his Nov. 8 retirement.

“Apparently, he became too hot to handle and the Senate investigation has further exposed the bogus character of the drug war of President Duterte,” Gaite said.

In Baguio City, Magalong said on Monday that Albayalde “had no choice, given that fellow officers and the rank and file of the PNP at Camp Crame had been avoiding and evading him.”

Apparently unaware of the meeting between the President and Año on Saturday, presidential spokesperson Salvador Panelo said in a television interview on Monday that Albayalde probably had had enough so that he decided to go early.

Later, Panelo told a press briefing that he still believed Albayalde was presumed innocent in the absence of evidence directly linking him to the police recycling of confiscated drugs.

Albayalde had said he was open to a Cabinet job after his retirement, but Bayan Muna chair Neri Colmenares said on Monday that Albayalde should not be reappointed to a government office.

“Albayalde should not be allowed just to cool down and then be appointed to some juicy post. He must be held accountable for his actions,” Colmenares said.

“If the President is serious against corruption and genuinely aims to rid his administration of illegal activities, the buck should not stop with General Albayalde and it should not stop with his resignation,” Castro said. —Reports from Marlon Ramos, Jovic Yee, Leila B. Salaverria, Julie M. Aurelio, Vincent Cabreza and the wires