newsinfo / Headlines
Headlines
‘WHO IS RESPONSIBLE?’ 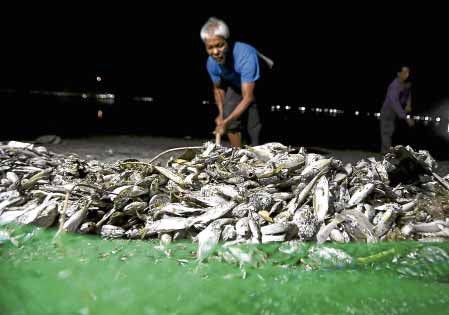 DEAD HAUL Workers of the Bureau of Fisheries and Aquatic Resources collect the dead fish along the shore of the Las Piñas-Parañaque Critical Habitat and Ecotourism Area. The fishkill is being attributed to the degrading ecosystem of Manila Bay. —RICHARD A. REYES

MANILA, Philippines — A fishermen’s group and a scientists’ organization have called for transparency in ongoing efforts to rehabilitate Manila Bay, after the reported fishkill in coastal waters off Cavite province and the cities of Las Piñas and Parañaque.

In a joint statement on Monday, the Pambansang Lakas ng Kilusang Mamamalakaya ng Pilipinas (Pamalakaya) and the Advocates of Science and Technology for the People (Agham) said it was not enough for the Department of Agriculture’s Bureau of Fisheries and Aquatic Resources (BFAR) and the Department of Environment and Natural Resources (DENR) to explain the causes of the phenomenon that had affected the fish and mussel catch from the bay.

“What we want to hear from them is who is responsible [for the fishkill], what are the measures and … concrete actions [that] affected fisherfolk can expect from the government?” they said.

“We demand [that] the Manila Bay Task Force … report the status and [effectivity of] the clean-up drive [in relation] to the degrading ecosystem of Manila Bay,” they added.

The task force led by the DENR began rehabilitation of the polluted bay early this year.

Environment Secretary Roy Cimatu earlier said the government was aiming to make Manila Bay fit for swimming by the end of the year, by reducing fecal coliform levels from untreated sewage waters pouring into the historic bay.

The BFAR said water pollution was the cause of the fishkill in the waters off Las Piñas and Parañaque.

Water samples taken by the agency showed poor levels of dissolved oxygen and high levels of ammonia and phosphate, which it said could have come from “excessive wastes” from agricultural, industrial and domestic sources.

“The heavy rainfall in the past few days may have [reduced] the salinity of the water,” the BFAR said.

Last week, at least two metric tons of dead fish were found in the waters off Las Piñas and Parañaque. Also recovered in the coastal towns of Cavite were dead mussels and oysters.

“In our estimates, for every hectare of mussel farms in Bacoor City, only a fourth—if none at all—could be harvested,” said Myrna Candinato, president of Alyansa ng mga Mandaragat sa Bacoor Bay.

“While agriculturists initially assessed that the state of some of the fishes indicate dynamite fishing, our parameter tests on the water quality in the area could pinpoint other factors that may have contributed to the fishkill,” DENR-NCR Executive Director Jacqueline Caancan said in a statement.

During an onsite inspection of the fishkill near the wetland park last week, authorities identified at least 33 species of fish such as tilapia, “talakitok,” “sapsap” and “lapu-lapu,” as well as crabs and shrimps. —Reports from Jhesset O. Enano and Karl R. Ocampo