TOKYO — At least 14 people were killed and nine others missing after Typhoon Hagibis slammed into Japan, officials said Sunday, as rescuers scrambled to reach people trapped by catastrophic flooding.

The storm’s “unprecedented” heavy rain triggered deadly landslides and caused rivers to burst their banks. The destruction forced Rugby World Cup organizers to cancel a third match though the key Japan-Scotland clash will go ahead.

By Sunday morning, the significantly weakened storm had moved back off land, but serious flooding was reported in several areas, including central Japan’s Nagano, where a burst levee sent water from the Chikuma river gushing into residential neighborhoods, flooding homes up to the second floor.

Japan’s military deployed 27,000 troops to aid rescue operations, including some in helicopters who winched people from the roofs and balconies of flooded homes in Nagano.

In Kawagoe, northwest of Tokyo, rescue workers in boats were evacuating elderly people from a retirement home that was heavily flooded in the storm.

One woman wearing an orange life vest clutched at rescue workers in hardhats as the boat moved through the muddy floodwaters.

Hagibis smashed into the main Japanese island of Honshu around 7:00 pm Saturday as one of the most violent typhoons in recent years, with wind gusts of up to 216 kilometers per hour.

The storm claimed its first victim even before making landfall, when high winds flipped a vehicle, killing its driver.

Landslides and flooding claimed more lives overnight, and the toll climbed higher after sunrise on Sunday, as the scale of the devastation wrought by Hagibis became clear. 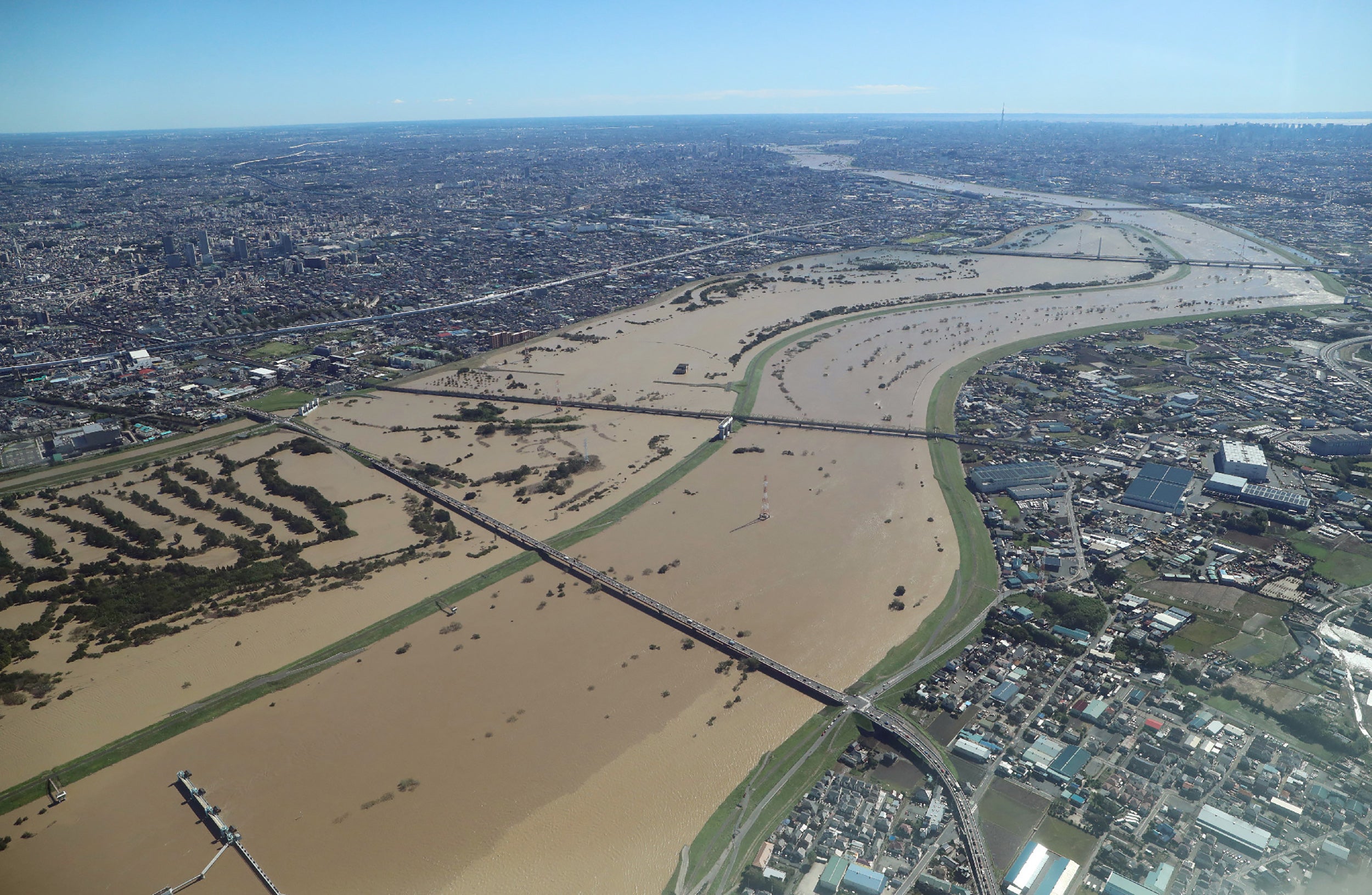 Bodies were retrieved from homes and vehicles submerged by floodwaters, from raging overflowing rivers, and from buildings buried in landslides.

The dead included a municipal worker whose car was overcome by floodwaters and a Chinese crew member aboard a boat that sank overnight in Tokyo Bay.

Four of the crew onboard were rescued, but authorities were still searching for another seven.

The government said at least nine people were missing and more than 140 injured in the storm.

“The government will do its utmost,” he added, pledging to deploy more troops and emergency officials if needed.

More than 160,000 homes were still without power by Sunday afternoon, with around 1,000 in Chiba, east of Tokyo, also experiencing water outages, national broadcaster NHK said.

At the storm’s peak, more than seven million people were placed under non-compulsory evacuation orders, with tens of thousands heeding the call and moving into government shelters.

Takeshita street, one of the most crowded and well-known shopping areas in the city, is pictured completely deserted in the Harajuku district of Tokyo on October 12, 2019, as the effects of Typhoon Hagibis begin to be felt in Japan’s capital. – Powerful Typhoon Hagibis on October 12 claimed its first victim even before making landfall, as Japanese weather authorities issued a top-level emergency rain warning and millions were issued non-compulsory evacuation orders. (Photo by Odd ANDERSEN / AFP)

“The water came up higher than my head in the house,” Hajime Tokuda, a finance professional living in Kawasaki near Tokyo told AFP.

He moved to his family’s home nearby, but that flooded too and they had to be rescued by boat.

“We never had a flood like this before in this neighbourhood,” said one farmer, who declined to give his name.

“We cannot even go into the flower warehouse due to the water. I don’t know where to start cleaning this mess.”

The storm also brought travel chaos during a long holiday weekend in Japan, with flights grounded and both local and bullet trains serving Tokyo suspended fully or partially.

On Sunday, train services were resuming and operations were slowly restarting at the two airports serving the capital, although many flights were cancelled.

But some lines remained halted, with aerial footage in Nagano showing rows of bullet trains partially submerged by flooding.

The storm had already caused havoc for the sports world, forcing the delay of Japanese Grand Prix qualifiers and the cancellation of two Saturday Rugby World Cup matches.

On Sunday morning, organizers said they had been forced to cancel a third fixture — Namibia-Canada — but gave the go-ahead to three others including a crunch Japan-Scotland game in Yokohama, near Tokyo.

Scotland faced elimination if the match was cancelled and had threatened legal action if it was not played.