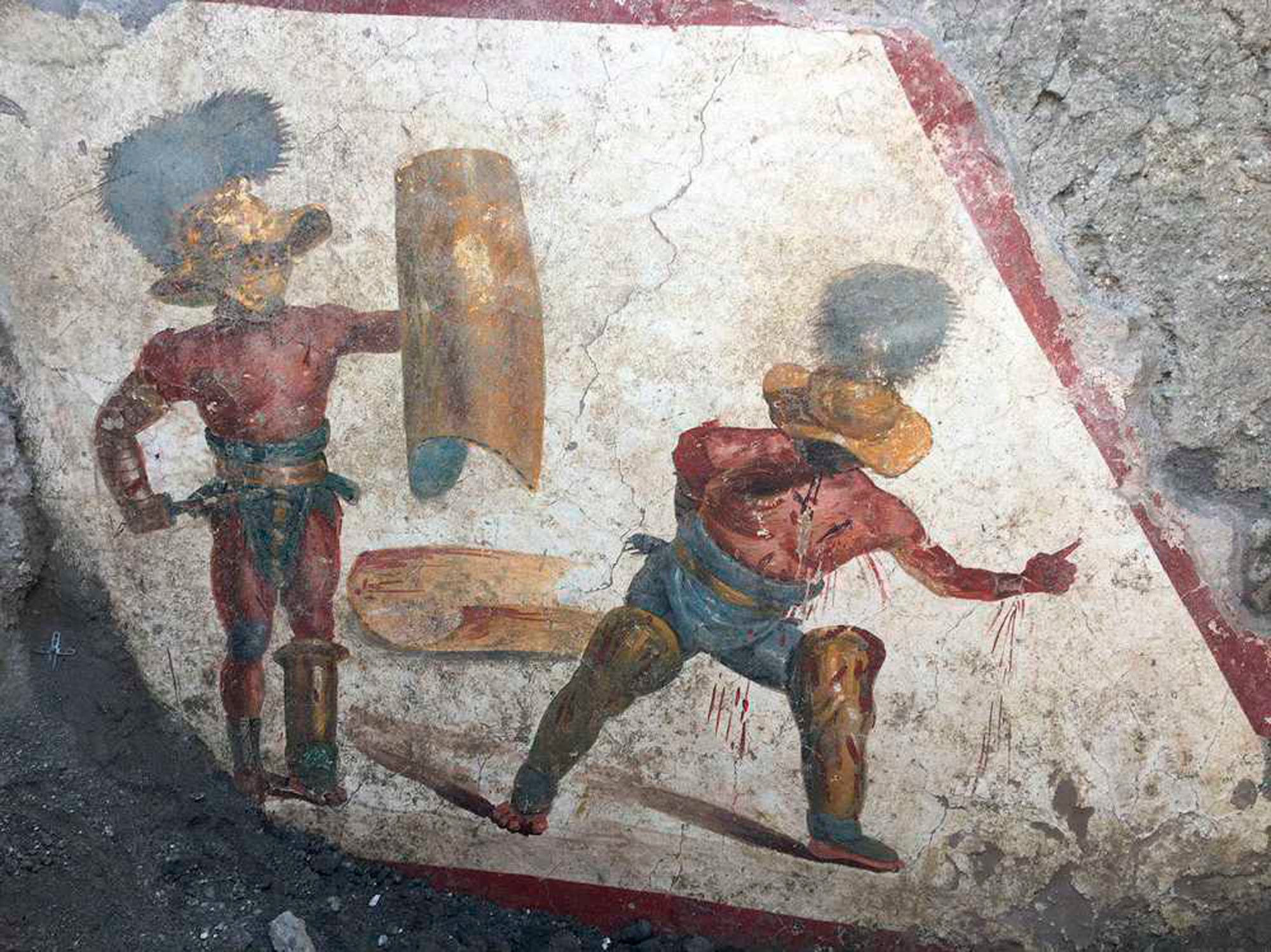 A view of a well-preserved fresco depicting fighting gladiators in the ancient Roman city of Pompeii, Italy, recently unearthed by archeologists. The new discovery — located in the Regio V site, north of the archaeological park — was unveiled on Friday and it’s not open to the public yet. (Archeological Park of Pompeii via AP)

ROME — Archeologists excavating what may have been an ancient Roman drinking den in the ruined city of Pompeii said Friday they have unearthed a well-preserved wall painting of gladiators in action, complete with realistically gory wounds.

The 3ft by 4.5ft fresco is located in the Regio V site, in the northern section of Pompeii’s archaeological park, in an area not currently accessible to visitors.

It was found on a wall beneath the stairwell of what was probably a tavern, or wine shop.

“Of particular interest in this fresco is the extremely realistic representation of the wounds,” said Osanna, adding that the outcome of the fight is unknown. The losing gladiator is holding up his finger to “implore for mercy,” he noted.

The gladiators’ fresco is the latest finding in the Pompeii park, which has yielded dozens of impressive discoveries in the last two years. But the site in recent years has also received bad publicity due to decay and poor maintenance.

Italy’s Culture Minister, Dario Franceschini, hailed the discovery on Friday, noting that “a few years ago Pompeii was known around the world for its negative image … Today’s story is one of redemption.”

Pompeii was a flourishing city destroyed by the eruption of Mount Vesuvius in 79 A.D. Last October, the finding of a charcoal inscription suggested that the eruption happened in October 79 A.D. rather than August of the same year, as was previously believed.

Franceschini stressed that the fresco finding “really shows that Pompeii is an inexhaustible source of research and knowledge for the archeologists of today and for the future.”

As part of a multi-million project founded by the European Union, Pompeii is currently undergoing its most extensive excavations since the 1950s, with archeologists removing tons of debris from long-buried areas of the city.  /muf