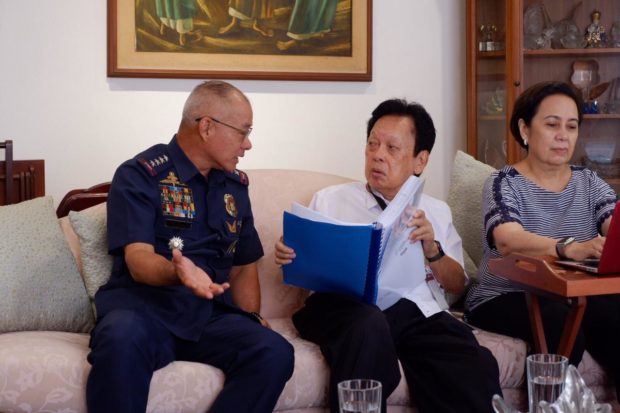 PNP chief Gen. Oscar Albayalde talks to veteran lawyer Estelito Mendoza concerning the filing of cases against those who are accusing him of being involved in the controversial Pampanga drug sting in 2013. Photo from Office of the Chief, Philippine National Police

Albayalde said Atty. Mendoza, who also hails from Pampanga, volunteered to help him file a complaint against his accusers in the investigation being conducted by the Senate.

He said that Mendoza offered to give him legal assistance, and that they have yet to identify which complaint to file pending further study of the legal team.

(He [Mendoza] asked our common friend how am I doing. So we paid him a visit and he’s so much willing to lead or give legal advice, with his team and him as a leader, here in a possible legal case against those who are accusing me of a lot of things that are not true, that are all lies, these things they are saying in the Senate hearing.)

Mendoza, a seasoned lawyer, got former President Gloria Macapagal-Arroyo acquitted of plunder in relation to the Philippine Charity Sweepstakes Office fund scam in July 2016. In August 2015, he had also convinced the Supreme Court to grant bail for former Senator Juan Ponce Enrile on the P10-billion pork barrel scam.

But Albayalde refused to disclose who will be named respondents of the complaint, adding that the public already knows who are throwing “false accusations”— which he dismissed as “unfounded” and “not supported with evidence” — against him.

He also advised that the public should look at the issue in a bigger perspective.

“By this time dapat nakita na ng mga tao kung sino yung tabi-tabi noong last hearing. Dapat medyo mapansin na ‘yan (the public should have known who were sitting beside each other during the previous hearing. They should have somehow noticed it by now),” he said, referring to Wednesday’s hearing led by the Senate justice committee.

“These people have to be made responsible for their actions. They should know better kaysa sa paggawa ng false accusations sa ibang tao na alam naman nila ay pawang kasinungalingan [instead of fabricating false accusations against people, even they know what they are saying are all lies],” he said.

Albayalde, who will soon hang his police uniform when he reaches the mandatory retirement age of 56 in November 8 but who will turnover the PNP chief post to his successor on October 29, then said he is “sure that the truth will come out.”

“Definitely, somebody here is lying, sabi nga nila (just like what they said), and definitely it’s not me,” he said. /jpv

Magalong: Albayalde is lying over role in 2013 Pampanga drug raid

Albayalde: ‘My children are suffering, bleeding’