MANILA, Philippines — Police Maj. Gen. Guillermo Eleazar on Friday said he has mixed emotions on his promotion at the police force as he will soon leave his post as National Capital Region Police (NCRPO) chief.

Eleazar was designated as chief of Directorial Staff of Philippine National Police (PNP), which will be effective on Saturday (October 12).

(I am sad because I have been NCRPO chief for 16 months and I am already accustomed to my work here.) 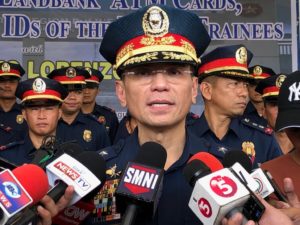 Eleazar called his promotion as his “career growth” as he acknowledged the PNP and government for his appointment as chief of PNP Directorial Staff.

“It’s just career growth. All of us in our career eh gusto natin ma-promote and clearly from regional director of the NCRPO with the rank of  two-star, ‘yung pagtatalaga sa akin pagtitiwala na ibibigay ay para maging Chief Directorial Staff na may commensurate na ranggo na three-star is a promotion for me,” Eleazar said.

(All of us in our career wanted to be promoted and clearly from regional director of the NCRPO with the rank of two-star, my appointment and trust to become a Chief Directorial Staff with a rank of three stars is a promotion for me.)

“I’m very thankful to the PNP leadership and of course sa ating pamahalaan [and of course to our government],” he added.

Eleazar, a member of the PMA Hinirang Class of 1987, is one of the possible successors of PNP chief Gen. Oscar Albayalde, who is set to retire on November 8. /jpv