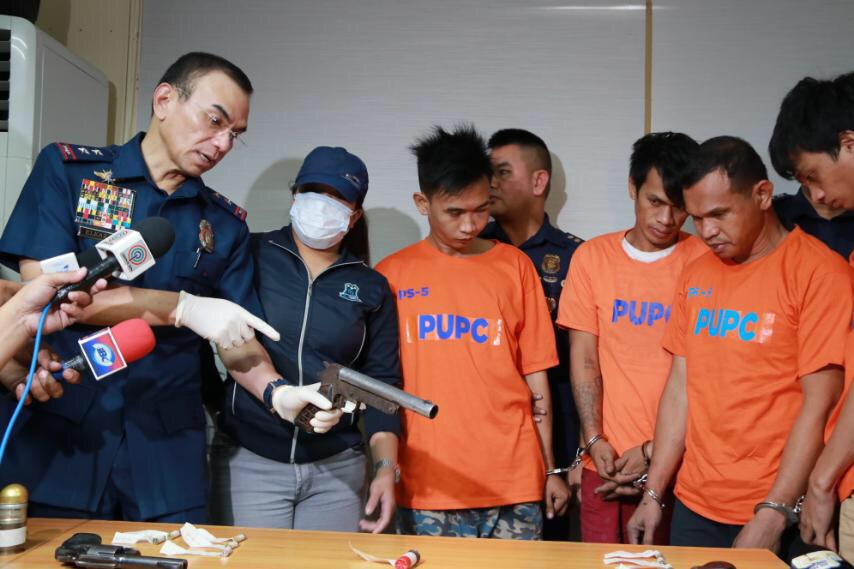 A report from the QCPD Police Station 5 (Fairview) showed that at about 9:20 p.m. on Thursday, a certain Elizabeth Erasmo was walking along Caramo Street in Barangay Greater Fairview when the suspects on board a Nissan Almera owned by Bautista stopped near her.

Police said three of the suspects stepped out of the car and took the woman’s cellphone and wallet containing P5,000 cash at gunpoint. The suspects then got back in the car and sped away.

The victim immediately reported the incident to the QCPD Police Station 5  whose officers showed her photos of suspects. Police said the victim identified Pancho from a photo as among those who robbed her.

Police then launched a follow-up operation and with the help of an informant, was able to locate Pancho’s house in Litex, Barangay Payatas. Police said they found at the house the suspects and the car used in the robbery.

Seized from the suspects were the cellphone of the victim, a caliber .38 revolver with two live bullets and three misfired bullets, an improvised shotgun, an M-203 grenade launcher and the care used by the suspects.

Police have also obtained a closed-circuit television camera footage which showed the suspects pretending to be customers just before robbing a convenience store along Rolex Street in Barangay Fairview on September 24.

The group is also believed to be behind a recent robbery of another convenience store in Barangay Batasan and in Caloocan City, said Montejo.

According to the QCPD, Bautista is also facing a case for reckless imprudence resulting in damage to property lodged at a Pasig City court and case of grave threats filed at a court in Bacoor, Cavite.

Police said the suspects sustained injuries after resisting arrest and were brought to the Quirino Memorial Medical Center for examination and treatment.

The suspects will be facing a complaint for violation of the Comprehensive Firearms and Ammunition Regulation Act, unlawful possession of  explosives and resistance and disobedience to a person in authority. /muf