‘Silly’ dare for Panelo a ‘distressing reality’ for Filipinos – youths 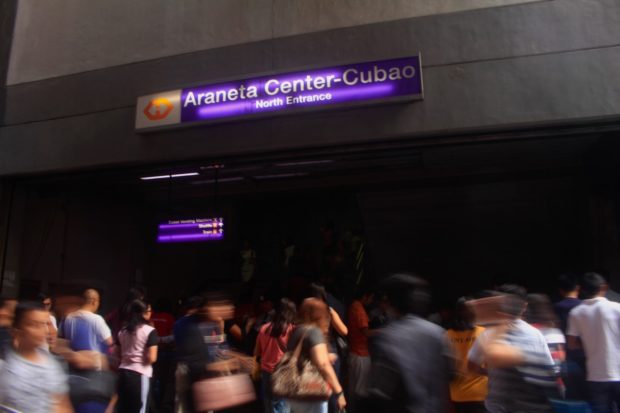 This photo taken on Friday, October 11, 2019, shows commuters flocking the Araneta Center-Cubao Terminal Station of the LRT Line 2. Presidential spokesperson Salvador Panelo was supposed to take the LRT-2 at this station – but opted to take the jeepney all the way instead – as he fulfilled his “commute challenge” to Malacañang on Friday amid assertions of Bayan Secretary-General Renato Reyes Jr. that a “mass transport crisis” prevails in Metro Manila. INQUIRER.net/ Gabriel Pabico

MANILA, Philippines — The Kabataan party-list lamented Friday how a “silly” challenge for presidential spokesperson Salvador Panelo remains to be a “distressing reality” for many commuting Filipinos.

“What’s a ‘silly challenge’ for the Presidential Spox is the distressing reality of many students, workers, and majority of Filipinos on long commuting hours daily,” the youth group pointed out in a statement after Panelo, who insisted there’s no mass transport crisis in Metro Manila, arrived at the Palace following his nearly four hours commute from Marikina early Friday morning.

More than a dare, Kabataan said the challenge was “a collective demand for the Duterte administration to hear our voices, and take action based on the perspective of commuters with focus on moving people, not vehicles.”

The party-list also denounced Panelo’s advice that commuters should be “creative” in beating the capital region’s monstrous traffic jams.

READ: Panelo tells public to ‘be creative’ as he rides jeepney to Malacañang

House Deputy Minority Leader and Bayan Muna Rep. Carlos Zarate, meanwhile, pointed out that President Rodrigo Duterte’s mouthpiece “sorely missed” the point of the commute challenge, which is to address the issue by improving the country’s public mass transportation system.

(It took Panelo almost four hours, four jeepney rides and a motorcycle ride to traverse the 23-25 kilometer distance which, in principle, could be traveled in an hour. Isn’t this a waste of time and a burden to passengers?)

(If there’s no transportation crisis, he could have almost reached Baguio in that span of time traveling.)

It was Bagong Alyansang Makabayan Secretary-General Renato Reyes who concluded that a “mass transport crisis” is gripping Metro Manila after the three major railways of the metropolis – MRT-3 and LRT Lines 1 and 2 – were bogged down by glitches last week.

Panelo accepted the commute challenge of Anakbayan and started his journey at 5:15 a.m. Friday. After changing jeepneys four times, he arrived at the Malacañang complex at 8:46 a.m.

For a regular employee, arriving past 8 a.m. at the office could mean being late for work and may possibly lead to a daily pay cut.

But since Panelo is a government official – a Secretary at that – he would not suffer any slash in his daily rate even if he arrives beyond 8 a.m. /kga