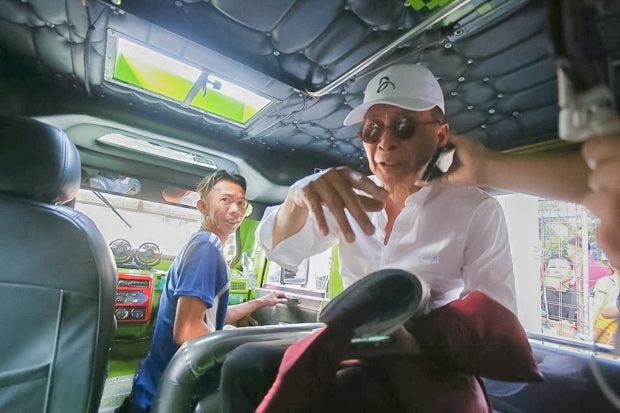 Presidential spokesperson Salvador Panelo rides a jeepney on Friday, October 11, 2019, as he accepted Anakbayan’s dare for him to commute to Malacañang in Manila amid an alleged “mass transport crisis” gripping Metro Manila. Contributed photo

MANILA, Philippines—Presidential Spokesperson Salvador Panelo insisted Friday that there is no mass transport crisis in Metro Manila even after he traveled for nearly four hours to reach Malacañang via four jeepney rides and a free backride on a motorcycle.

Panelo took on the commute challenge of militant groups on Friday morning. He had to take four jeepney rides to reach Manila from Marikina City at 5:15 a.m.

Panelo explained that he started commuting from New Manila in Quezon City to Concepcion in Marikina City before going back to Cubao, Quezon City where he took a jeepney ride bound for Manila.

He said that he purposely went around commuting to witness the traffic situation himself.

The Palace official claimed that commuting has worsened but it can’t be called a crisis yet because commuters can still get rides.

While he acknowledged that there is indeed a lot of problems hounding the transportation system, Panelo said the government is “doing something about it” even after Congress refuses to grant President Rodrigo Duterte emergency powers to address the worsening traffic situation in Metro Manila.

“There is traffic crisis precisely because of the conditions like the volume of cars which cannot be accommodated by our roads, many motorists violate traffic rules and also the inefficient traffic management,” he said in Filipino.

He also said that commuters should leave early if they wish to arrive at their destinations on time. /jpv