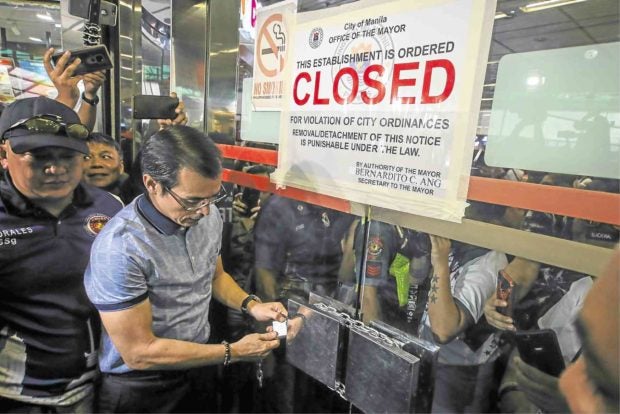 The Isetann Cinerama Complex in Manila was shut down on Wednesday after the city government finds the owner and property manager of the decades-old establishment failed to secure proper business permits for the year. FILE PHOTO

MANILA, Philippines — The Manila local government on Thursday said Isetann Mall-Recto’s planned reopening on Oct. 11 cannot push through as the operators have yet to comply with the needed requirements.

“As per Bureau of Permits and Licenses Office, Isetann Mall Recto has yet to pay for permits of their cinemas as well as their cinema snack bar,” Manila Chief Public Information Officer Julius Leonen said in a text message Thursday.

“In addition, they still have yet to pay for their tax delinquencies worth around P4 million, which is now at P2 million because they are availing the local government’s tax amnesty program,” he added.

This comes after the mall earlier announced its reopening on Friday, barely two days after Manila Mayor Isko Moreno ordered the mall’s closure due to violation of city ordinances and alleged incorrect business permits.

Leonen explained that should the operators of the mall comply with the needed requirements, the compliance will then be presented to Moreno.

“And once may green light na po [Once they are given the green light], the BPLO will issue a lift order and they will be the ones to remove the padlocks at Isetann Mall,” Leonen said.

The Manila PIO chief added that operators of the mall are set to pass the remaining requirements on Friday.

“Ang maganda po dito [What’s good about this], they [the operators] have shown their willingness po to cooperate with the local government by immediately complying with the requirements,” Leonen expressed.  /jpv