Peasant leader arrested by police; accused of being NPA commander 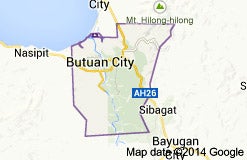 CAGAYAN DE ORO CITY—-Police arrested on Thursday afternoon in Butuan City a leader of a nationwide farmers organization whom they alleged to be the head of an urban guerrilla unit of the New People’s Army (NPA).

Rafols said the team served a warrant of arrest issued by Judge Lilibeth Ladaga of the Regional Trial Court Branch 28 in Lianga town in Surigao del Sur for three counts of frustrated murder.

Rafols said Lincuna is the secretary of the Regional Urban Committee (RUC) of the NPA Northeastern Mindanao Regional Committee, and also chairman of the Kilusang Mayo Uno that spearheaded mass actions in Butuan City.

“ The success came after almost a month of information gathering and surveillance conducted by the joint Butuan City Police Office (BCPO) Intelligence Branch, Criminal Investigation and Detection Group together with the Philippine Army,” Rafols said in a statement.

The Kilusang Magbubukid ng Pilipinas in Caraga region issued an alert on social media saying that Lincuna was their secretary general, not for the KMU.

“Ka Yoyong (Lincuna) is a farmer leader since the decade of the 80s and a council member of the Kilusang Magbubukid ng Pilipinas,” the group said in a post.

It said that the frustrated murder cases arose from trumped-up charges against Lincuna and the farmers he leads.