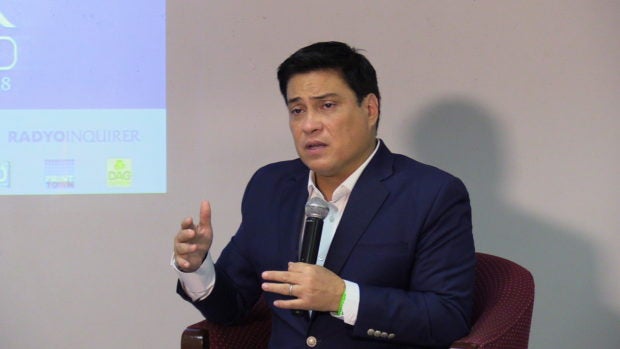 MANILA, Philippines — Senate Majority Leader Juan Miguel Zubiri on Thursday expressed frustration over delays in the processing of permits of stakeholders for them to undertake energy development projects in the country.

Zubiri, who authored the Ease of Doing Business Law, said he still receives complaints from investors in the energy sector about “the length [of days] that it takes to issue certificates, licenses, [resolving] motions for reconsideration and the like.”

“Dapat yan, [It should be like this:] if it’s longer than 20 working days, under the law, it is automatically deemed approved,” Zubiri said during the Senate finance subcommittee hearing on the 2020 proposed budget of the Department of Energy (DOE).

The senator then noted that the Philippines dropped eight notches down in the latest Global Competitiveness Report by the World Economic Forum.

“I can’t believe it,” an exasperated Zubiri said.

“As author of the law, it disgusts me because why the hell did I waste my time passing that law and we still have to drop…Whatever it may be because we still get some complaints…I want to complain,” he added.

In response, Energy Undersecretary William Fuentabella explained that the department had to combine the Ease of Doing Business law with the Energy virtual One Stop Shop (EVOSS) Act, which was also passed by Congress this year.

“So the department is combining all these because the EVOSS is quite specific on the generation transmission and distribution projects,” Fuentabella said.

But Zubiri argued that the Ease of Doing Business Law has already been harmonized with the EVOSS act.

“Pero we harmonized it eh, kasi si chairman ang nag-author niyan eh [But we already harmonized it, the chairman authored that],” Zubiri said alluding to Senator Sherwin Gatchalian, who chairs the Senate committee on energy.

“Nagusap kami [We talked already], it has to be harmonized whatever it may be, it has to be 20 days  and no one can argue to be either than that,” he added.

While Fuentabella said the DOE uses the EVOSS law as a guide, he assured Zubiri that they would still refer to the Ease of Doing Business law from time to time.

Zubiri then expressed deep concern over how the Philippines is comparing with other Southeast Asian nations in terms of ease of doing business.

“You know I am sick and tired of us being the laggard in Southeast Asia when it comes to ease of doing business,” he said.

“What is taking the delay? It’s so simple. Just say yes or no,” he added.

Fuentabella said the department was just “strictly” implementing the law.

Zubiri then moved to suspend the hearing to privately talk with Fuentabella about the matter.

After their short break, Zubiri appeared to have cooled down and said that the DOE had committed to fast track the service contacts of the service holders. /jpv