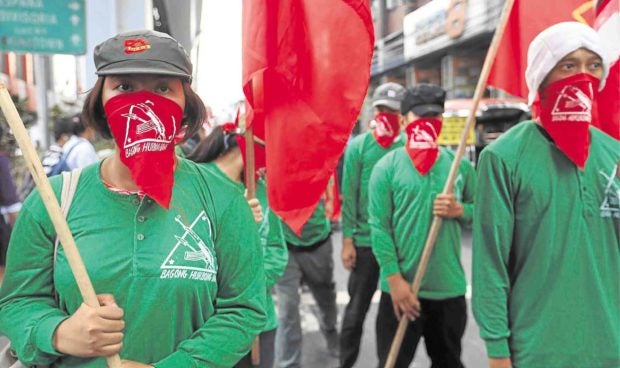 RED SUPPORT A group of students stages a lightning protest in Manila to show support for the Communist Party of the Philippines and the New People’s Army during the latter’s founding anniversary in March. —EDWIN BACASMAS

CITY OF SAN FERNANDO—Local government units (LGUs) in 81 of 130 towns and cities in Central Luzon have declared the Communist Party of the Philippines (CPP) and its armed wing, New People’s Army (NPA), persona non grata (unwanted persons) in separate resolutions.

At least 178 of 3,102 villages in the region’s seven provinces have also been mobilized to help in the peace campaign of President Duterte through Executive Order No. 70, Coronel said in a report.

Mr. Duterte declared the CPP and NPA as terrorist groups in 2017.

Coronel, however, did not disclose the towns, cities and villages participating in the campaign.

The military’s Northern Luzon Command (Nolcom) said 19 towns and 48 villages in northern Luzon, and the provinces of Nueva Ecija and Bulacan had given unwanted status to the CPP and NPA between March and May this year.

In Cagayan province, the military and the police’s Task Force Tala reported the arrest on Tuesday of three women suspected to be high-ranking leaders of the CPP-NPA.

In a statement, Lt. Gen. Ramiro Manuel Rey, the Nolcom commander, described the local communist movement as “discredited and irrelevant,” noting that fighting this was “everybody’s concern.”

Lt. Col. Dennis Cana, the Solcom spokesperson, said records from the Armed Forces of the Philippines showed that 114 NPA rebels had been killed in clashes with government troops around the country this year.

In a statement, the AFP said it was supporting the “Joint Task Force Balik-Loob,” led by the Department of National Defense, to ensure that rebel returnees were given the chance and opportunity to return to mainstream society, and avail of benefits from the government’s Enhanced Comprehensive Local Integration Program (E-Clip).