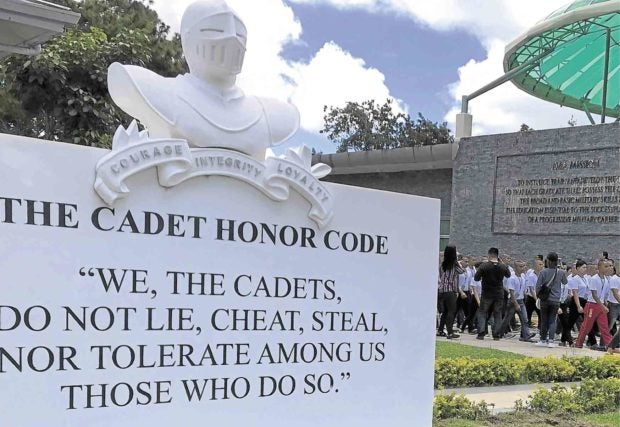 HONOR ABOVE ALLEvery cadet trained by the Philippine Military Academy is expected to live by its honor code, which guides their behavior as responsible citizens and leaders of the Armed Forces of the Philippines. —VINCENT CABREZA

BAGUIO CITY—The corps of cadets of the Philippine Military Academy (PMA) has initiated a leadership change to prepare for new policies on maltreatment following the death from hazing of a plebe last month.

Cadet 1st Class Ram Michael Navarro, the class baron, relinquished his post as brigade commander to Cadet 1st Class Marion Cordova shortly after murder and hazing charges were filed on Oct. 8 against seven cadets for the death of Cadet 4th Class Darwin Dormitorio, a member of the PMA Class of 2023, according to Maj. Reynan Afan, erstwhile PMA spokesperson.

The family of Dormitorio also charged with dereliction of duties two PMA staffers and three military doctors, who failed to treat the plebe’s internal injuries from beatings that dated back to August.

Navarro stepped down to “share the responsibility for what happened [to Dormitorio] and to allow the cadet corps to initiate far-reaching reforms,” said Afan, who also relinquished his post as spokesperson. Afan also serves as the academy’s deputy inspector general.

On Sept. 24, Lt. Gen. Ronnie Evangelista and Brig. Gen. Bartolome Bacarro resigned as PMA superintendent and commandant of cadets, respectively, after wrapping up the academy’s internal investigation of the Dormitorio hazing.

“In a community of leadership, discipline, trust and fellowship, the cadet corps of the Armed Forces of the Philippines denounces those who seek to undermine the mission of our institution …, [and is resolved] to put an end to such excruciating acts that defy the very values that the [PMA] instills … We stand as one corps against maltreatment,” said a manifesto read by Navarro.

The manifesto was released on the same day the Baguio City police confirmed that Dormitorio’s autopsy detected signs of injuries attributed to “blunt force trauma.”

The manifesto emphasized that the corps “puts an end to malpractices emanating from ignorance and the negligence of a few” to preserve the “core values that bind us together as a band of brothers and sisters.”

It was referring to the honor code, which governs cadet behavior by prohibiting lying, cheating and stealing as well as tolerating anyone who breaks these values. That code is enforced through an honor system supervised by a cadet honor committee.

Through the supervision of upperclassmen [and] the cooperation of underclassmen, the prohibition on maltreatment continues to be enforced by a cadet conduct policy board (CCPB), the manifesto said. The board is also empowered to report and discipline erring cadets.

The manifesto was signed by Navarro, a member of the graduating “Masidlawin” Class of 2020, and the class president, Cadet 1st Class Alfonso John Tumanda.

New cadet policies have yet to be announced although Brig. Gen. Romeo Brawner, acting commandant of cadets, has proposed removing from tactical officers the oversight control over the cadet corps. He suggested restoring that responsibility to senior cadets under a first-class system.

As senior cadets, they must be given the power to police their own ranks, said Brawner, a member of the PMA “Makatao” Class of 1989.

“The honor code is perfect,” he said, “but it has been violated because of how it has been enforced or interpreted.”

He said granting graduating cadets authority over the three younger classes would discourage upperclassmen from maltreating plebes “in secret hazing rites.” He said the system would also help hone the leadership skills of cadets.