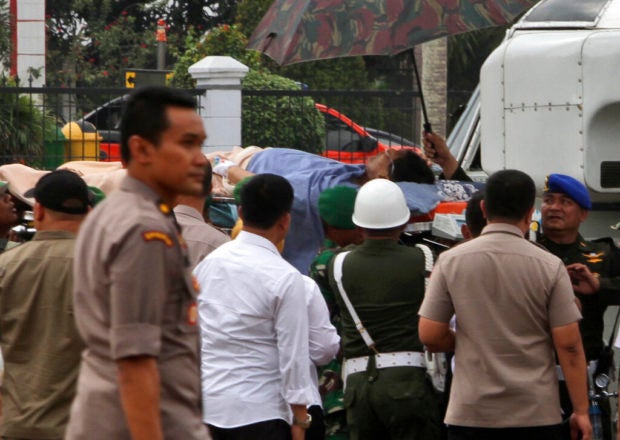 ALTERNATE CROP – Indonesian soldiers carry Indonesian Coordinating Minister for Politics, Law and Security Wiranto on a stretcher to a waiting helicopter to be evacuated to Jakarta, in Pandeglang, Banten province, Indonesia, Thursday, Oct. 10, 2019. Indonesian police officials say Wiranto and two other people, including a local police chief, have been wounded by a knife-wielding man and taken to a hospital during a visit to a western province. AP Photo

JAKARTA, Indonesia — Police said a knife-wielding man has wounded Indonesia’s security minister, a local police chief and another person in a western province.

National police spokesman Dedi Prasetyo said in a news conference Thursday that chief security minister Wiranto was wounded in the abdomen. Wiranto, who goes by one name, was flown to Jakarta and was in stable condition in a hospital.

Prasetyo said the man who attacked the security official during a visit in Banten province may have been exposed to the Islamic State group.

Prasetyo says the attacker also wounded a police chief who was about to greet Wiranto as the latter alighted from a car, along with a villager.

The attacker and a female companion were arrested. /jpv