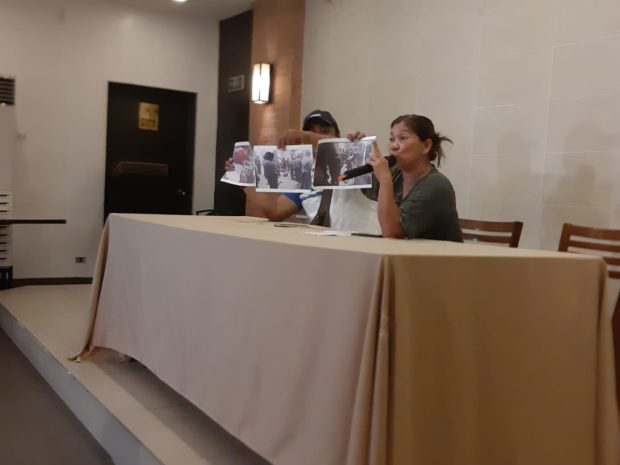 Lalaine Yuson, wife of slain Batuan, Masbate Vice Mayor Charlie Yuson III, shows photos of the arrest of the suspects in the ambush of her husband in Sampaloc, Manila, during a press conference in Ermita, Manila, on Thursday, October 10, 2019. She claimed that one of the gunmen in the crime was a former driver of PCSO board member Sandra Cam. INQUIRER.net/Neil Mercado

MANILA, Philippines — The wife of Batuan, Masbate Vice Mayor Charlie Yuson III on Thursday alleged a possible coverup by police on the ambush that killed her husband and injured his two companions in Sampaloc, Manila.

Lalaine Yuson said there seemed to be a “job order” among members of the police who refused to answer their inquiries when they visited the Manila Police District (MPD) headquarters on Wednesday to see the arrested suspects in the daring day-time ambush of the vice mayor.

She said she received a tip that at least one of those apprehended was a member of the Masbate Police.

“They were instructed by someone, may alam kaming tinatawag ng taas, (we know someone is calling from the higher ups)” she asserted.

She further said that policemen barred them from seeing the suspects, claiming that the investigation is still ongoing.

(Beloved President… Let us have a Senate hearing on this act of PNP to cover up somebody.)

Lalaine also revealed that Manila Police District chief Brig. Gen. Vicente Danao Jr. told her that the charges to be filed against the suspects would be illegal possession of firearms, to which she disagreed.

(If this is a coverup then we would not present the suspects. We were supposed to present them this morning but they want to get ahead of the investigation. It is not that easy.)

“Ang daming witnesses, but are you at the crime scene, ang sagot wala. So anong gagawin natin d’yan? How will the water hold kung ganun ang statement nila?” he added.

(There are a lot of witnesses but are you at the crime scene, they say no. So what are we going to do with that? How will the water hold if that is their statement?)

Danao further said that he cannot confirm yet if among the arrested suspects were members of the Masbate Police as they refused to identify themselves.

The Batuan vice mayor was shot dead on Wednesday morning while having breakfast at a canteen in Sampaloc.

Four suspects were later apprehended after the van they used in the ambush was tracked down. /kga