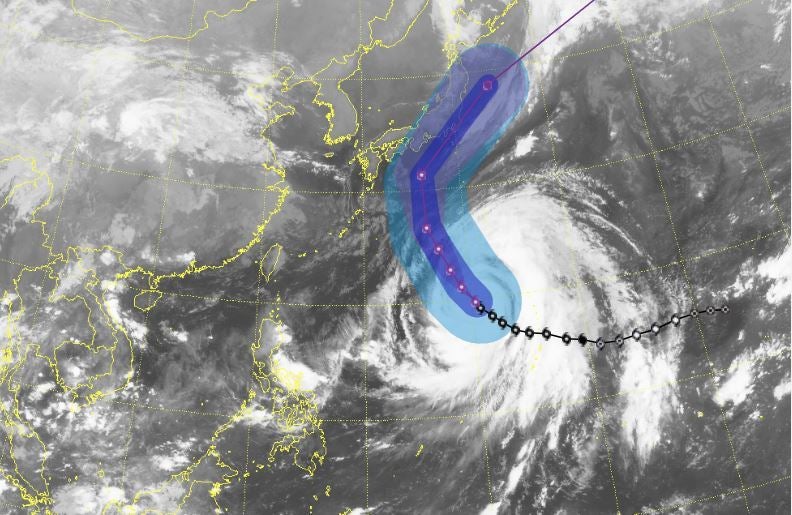 Satellite image shows the expected path of Typhoon Habigis as of 9 a.m. on Oct. 9, 2019 Korea Meteorologial Administration via The Korea Herald/Asia News Network

SEOUL — The season’s 19th typhoon in the Pacific region, Hagibis will not impact South Korea but is likely to batter Japan over the weekend, the weather agency said Wednesday.

As of 9 a.m. Wednesday, Hagibis was in waters some 840 kilometers northwest of Guam in the western Pacific Ocean, the Korea Meteorological Administration said. It was tracking north-northwestward at a speed of 13 kilometers per hour and is expected to reach waters 980 kilometers northeast of Okinawa at around 9 p.m. Thursday.

The weather agency said the very strong midsize typhoon could turn out to be the most powerful of the year. As of Wednesday midday, the storm currently had a maximum sustained wind speed of 55 meters per second, or 198 kilometers per hour, central pressure of 915 hectopascals and strong wind radius of 480 kilometers. The US Joint Typhoon Warning Center upgraded Hagibis to a super typhoon, with its one-minute sustained wind speeds reaching 67 meters per second.

South Korea will likely be unaffected by Hagibis, as it is projected to skirt away from the cold atmospheric pressure surrounding the peninsula. The typhoon will turn northeastward toward Tokyo on Saturday morning and may possibly make landfall later that day.

Regardless, Korea may see some rain and strong wind in its southernmost regions due to the collision between the cold atmosphere near the land and the typhoon’s hot air. A downpour is also forecast over the eastern coastal areas on Saturday.