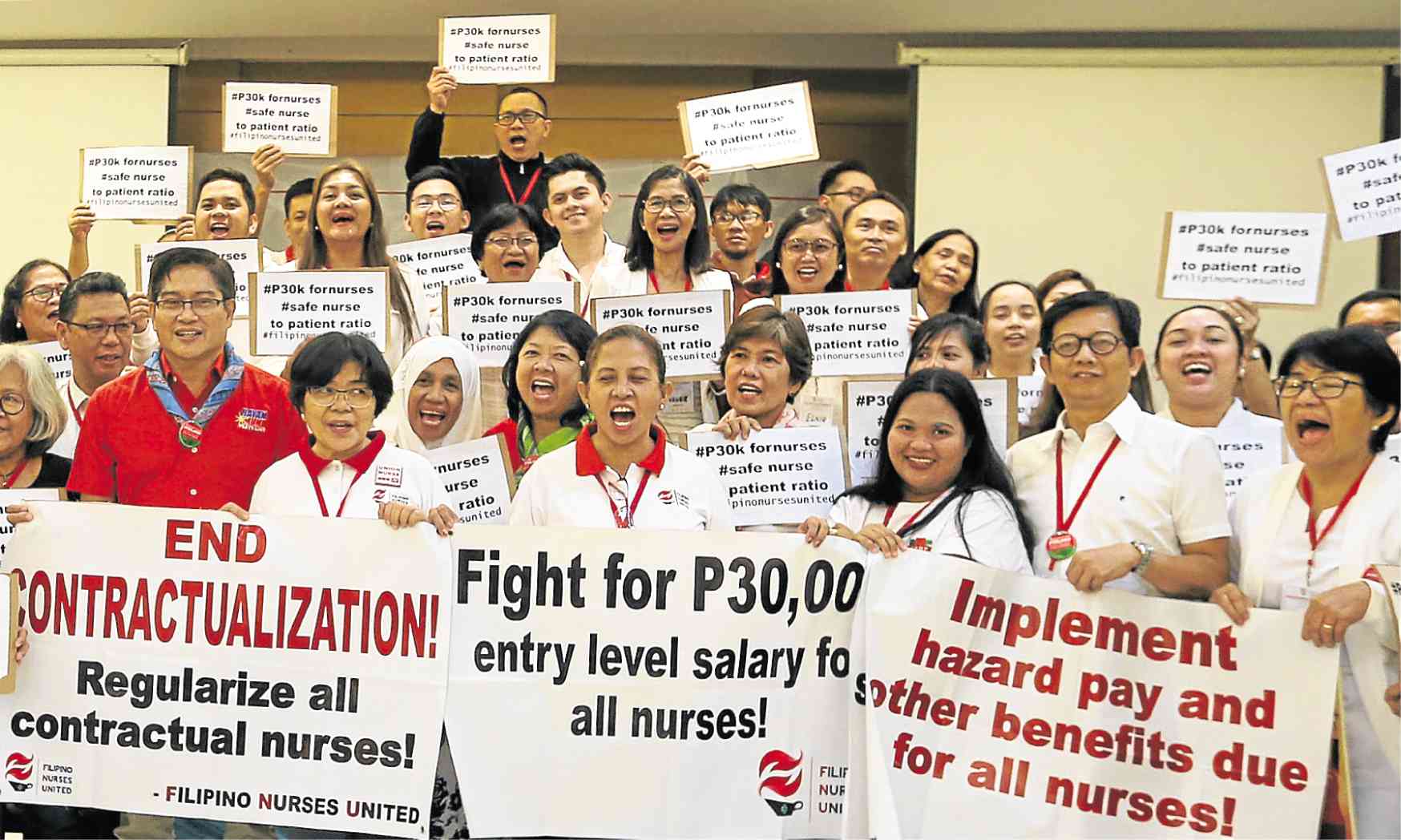 PAY HIKE DEMAND Members of the Filipino Nurses United call for a P30,000 entry-level salary for nurses on Tuesday, the start of the organization’s two-day congress in Manila. —EDWIN BACASMAS

MANILA, Philippines — The Supreme Court has ruled that government nurses are entitled by law to a minimum monthly salary of up to P30,531, but in the same vein says it cannot compel Congress to implement the  salary prescribed by the Philippine Nursing Act of 2002.

In a statement, the tribunal said the justices decided during its full-court session on Tuesday in favor of the petition by Ang Nars party list represented by Rep. Leah Samaco-Paquiz.

Senior Associate Justice Antonio Carpio wrote the decision, which declared valid Section 32 of Republic Act No. 9173 that provides for Salary Grade 15 for government nurses. Depending on the class of the city or municipality, SG15 ranges from P19,845 to P30,531.

A copy of the decision has yet to be released.

The high court, however, did not grant Ang Nars’ petition to order its implementation. Enforcing the minimum salary, it said, “would require a law passed by Congress providing the necessary funds for it.”

On Tuesday, Filipino Nurses United (FNU), a national organization of nurses in government and private hospitals, called for a minimum salary of P30,000 for nurses at the start of its congress in Manila.

FNU national president Eleanor Nolasco said the minimum monthly pay for nurses was meant to help ensure that enough nurses were working in the country’s hospitals.

The current nurse-to-patient ratio can reach up to 1:40 in some hospitals, she said. According to the Department of Health, the ideal proportion of nurses to patients is 1:12.

Nolasco said the current take-home pay of nurses in public hospitals was between P18,000 and P21,000. It is even lower in private hospitals, especially in the provinces, at between P8,000 and P12,000.

Health Secretary Francisco Duque III on Wednesday said that while he supported calls to provide nurses better pay, the problem was finding the money to fund it.

“It is easy to say ‘yes, we will give you a higher salary.’ [But] at the end of the day, the question is do we have the funds?” Duque said at a forum.

In its statement, the Supreme Court said President Gloria Macapagal-Arroyo’s Executive Order No. 811, could not overturn RA 9173, or the Philippine Nursing Act, which Arroyo signed in 2002. EO 811 set the salary grade for nurses at Salary Grade 11, or P20,754 a month.

RA 9173 provides that the minimum  pay for nurses in public health institutions will not be lower than Salary Grade 15, while nurses working in local governments will have corresponding adjustments to their salaries.

Ang Nars had appealed the downgrading of government nurses’ salaries in the health, justice and budget departments. Paquiz filed a case in the Supreme Court to challenge EO 811, and asked that nurses be given salaries equivalent to Salary Grade 15.

Nolasco said that what the government lacked was not funding but political will.

“When President Duterte wanted to raise the salaries of policemen, there were funds for it. So it’s not believable that they don’t have the funds [for nurses],” she said on Wednesday.

“They have the money if they want to, but they have a thousand reasons if they don’t want to,” Nolasco said.

Upon his assumption in 2016, Mr. Duterte worked to increase the salaries of policemen and other uniformed personnel.

Currently, the monthly base pay for a patrolman, private and fireman is P29,668. Generals, on the other hand, earn close to P150,000 a month.

In order to earn as much as a general, a nurse would have to go to such countries as Canada. In the United States, the average monthly salary of a nurse is equivalent to P200,000.

Duque acknowledged that even if the P30,000 minimum pay for nurses were granted, this was “still not enough” to keep these workers in the country given how much they could earn abroad.

“There’s no way in this world that we could bring it to even to 50 percent [of what they could earn in the United States]. We cannot afford it,” he said.

Asked how much would be the ideal raise, Duque said it might be good if Filipino nurses would receive close to the salaries of their Southeast Asian counterparts.

But he reiterated that such salary could not be given to all nurses, at least in the case of the public sector. He cited factors like the income classification of a city, which limits the pay government workers receive.

In the meantime, Duque appealed to the nurses’ “sense of patriotism” that they stay in the country given their crucial role in the nation’s health system.

“Nurses are an important provider of health care. There can be no universal health care without nursing care,” he said.

Nolasco said on Tuesday that some 200,000 nurses had opted to work in health-related facilities offering services, such as cosmetic procedures, because the basic monthly pay offered by even top private hospitals in the country were not attractive enough.

Many nurses have also left for work overseas. —REPORTS FROM DONA Z. PAZZIBUGAN AND JOVIC YEE