Are we alone? Nobel Prize goes to 3 who tackled cosmic query

WASHINGTON – They are two of the most fundamental questions not just of science, but of humanity: How did we get here? And are we alone? 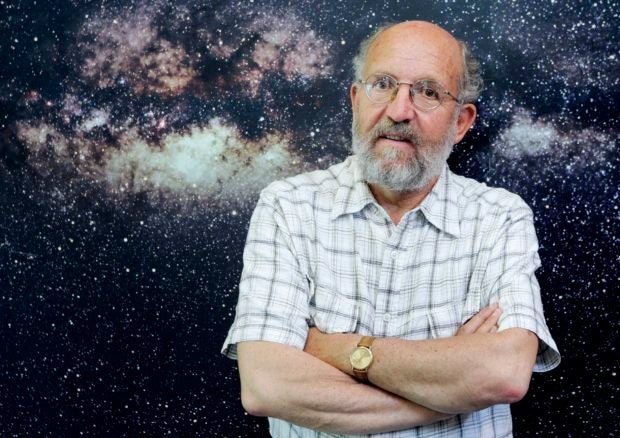 FILE – In this Wednesday, May 17, 2006 file photo Swiss professor Michel Mayor, astrophysicist and director of the Geneva Observatory, poses in front of the picture of the Milky Way, in Geneva, Switzerland. The 2019 Nobel prize for Physics was given to James Peebles “for theoretical discoveries in physical cosmology,” and the other half jointly to Michel Mayor and Didier Queloz “for the discovery of an exoplanet orbiting a solar-type star,” said Prof. Goran Hansson, secretary-general of the Royal Swedish Academy of Sciences that chooses the laureates. (Salvatore Di Nolfi, Keystone via AP)

A Canadian-American cosmologist and two Swiss scientists split this year’s Nobel Prize in Physics on Tuesday for not quite answering those universal questions, but getting closer to the cosmic truths.

Canadian-born James Peebles, 84, an emeritus professor at Princeton University, won for his theoretical discoveries in cosmology, about what happened soon after the Big Bang that eventually led to the formation of galaxies and the universe as we know it.

Swiss star-gazers Michel Mayor, 77, and Didier Queloz, 53, both of the University of Geneva, were honored for finding an exoplanet — a planet outside our solar system — that orbits a sun-like star.

A day of deep astrophysics and talk of extraterrestrial life also included pop humor, with the Nobel Prize committee quoting from the theme song of the American TV sitcom, “The Big Bang Theory,” whose protagonists, Sheldon and Amy, won a physics Nobel in the series finale, and a giggling Peebles referring to singer Bob Dylan.

“This year’s Nobel laureates in physics have painted a picture of the universe far stranger and more wonderful than we ever could have imagined,” said Ulf Danielsson of the Royal Swedish Academy of Sciences, in announcing the laureates.

“Our view of our place in the universe will never be the same again.”

Peebles’ work is a deeply theoretical look back in time and space at how the universe came to its current form, mostly filled with dark matter and dark energy we can’t even see. It’s probably the first Nobel for purely theoretical cosmology, instead of something observed, noted CalTech physicist Sean Carroll.

Peebles, hailed as one of the most influential cosmologists of his time, who realized the importance of the cosmic radiation background born of the Big Bang, will collect one half of the 9-million kronor ($918,000) cash award.

Mayor, who is an astrophysicist, and Queloz, an astronomer who is also at the University of Cambridge in Britain, will share the other half. Their finding of the first planet outside our solar system circling a star like our own made astronomers look harder for life elsewhere in the universe.

“Maybe we can discover some form of life. We don’t know what kind of form,” Mayor said Tuesday as he arrived in Madrid for a scientific speaking engagement. He said scientists “are absolutely certain that a lot of these planets have good conditions for life.”

Mayor and Queloz started a revolution in astronomy when they discovered 51 Pegasi B, a gaseous ball comparable with Jupiter, in 1995 — a time when, as Mayor recalled, “no one knew whether exoplanets existed or not.”

That was “the first step in our search for, ‘Are we alone?'” said astronomer Lisa Kaltenegger, director of the Carl Sagan Institute at Cornell University.

More than 4,000 exoplanets have since been found in the Milky Way, and scientists think one out of every four or five stars have planets. “We have 200 billion stars out there in our galaxy alone, so I like our chances,” Kaltenegger said.

Queloz was meeting Tuesday with other academics interested in finding new planets when the press office at Cambridge University interrupted to tell him the big news: He had won the Nobel. He thought it was joke at first.  /gsg