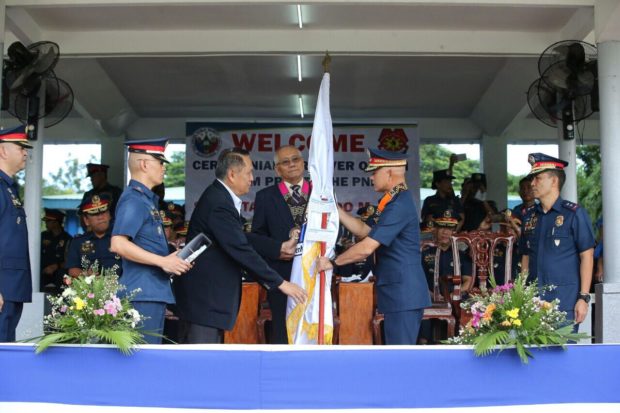 MANILA, Philippines — The Philippine National Police (PNP) on Monday formally took full supervision of the National Police Training Institute (NPTI) and its 18 regional training centers from the Philippine Public Safety College (PPSC), 28 years after the organization was deprived of its function to train its future personnel.

In a ceremonial turn-over at Camp Vicente Lim in Calamba, Laguna, PNP chief Gen. Oscar Albayalde said the transfer of supervision of the NPTI from the PPSC to the PNP will allow the police force to have first-hand involvement in training future police officers.

Albayalde said the formal turnover is a “landmark event that ushers real, sustainable, and lasting change in the PNP.”

“By operation of law, the PNP is now solely responsible for the making of a complete police officer from recruitment to retirement. Thus, we only have ourselves to blame if any PNP member will go astray because of poor training and orientation,” he told reporters after the turnover ceremony.

A similar ceremony was also held at Camp General Mariano Castañeda in Silang, Cavite during the transfer of supervision of the Philippine National Police Academy (PNPA) from the PPSC to the PNP on September 30.

READ: PNP to address hazing at PNPA as it takes over institution

With its takeover of both PNPA and NPTI, Albayalde said the PNP is now “better situated” in producing qualified officers who will join the 190,000-strong police force.

Over a month before he officially retires from service, he vowed to take full responsibility of training future police officers “in order to effectively address current dysfunctions” and ensure that the intent of the Republic Act 11279, which mandated the transfer of the PNPA and the NPTI to the PNP, are observed. RA 11279 was signed by President Rodrigo Duterte on April 12.

According to Albayalde, this newly-mandated capacity of the PNP to train police aspirants at NPTI will allow the agency to cope with the annual quota of 10,000 recruits required by the National Police Commission.

He added that this comes at such a crucial time as the PNP assumes a critical role in ending local communist armed conflict within the next three years.

“There is no stopping us now in our road to excellence in training our own personnel on the core values of the police service and the skills required to apply the science of policing. And all this begins with basic and mandatory training here at the NPTI,” he said during his speech.

“Let all those who pass through the portals of this training institution bring the PNP to greater heights of honor and glory for our country and people,” said Albayalde. /je