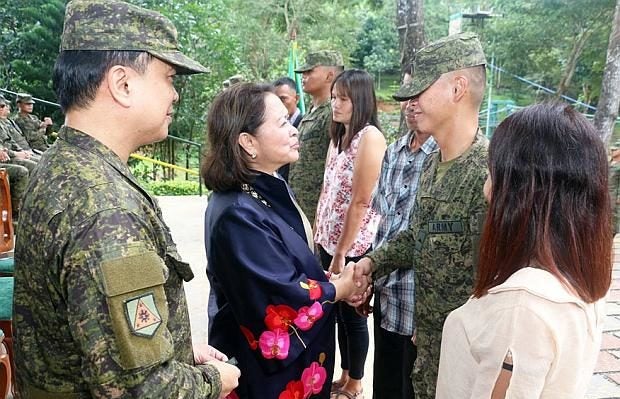 In a press release issued on Sunday, Brig. Gen. Arnulfo Marcelo Burgos Jr., commander of the 2nd Infantry Division based in Tanay, Rizal, said the new Army privates would be a “welcome addition to our frontline units as we go all out for the government’s final push to finally put an end to the New People’s Army terrorists’ insurgency.”

Capt. Jayrald Ternio, chief of the Army’s 2nd ID Public Affairs Office, said the new privates — graduates of the 2nd Division Training School (2DTS) Candidate Soldier Course — were taught with the basic knowledge and skills of soldiery during their four months of training.

“The graduates are ready to assume the role of being advocates of peace, servants of the people and defenders of Southern Tagalog,” Lt. Col. John Jadloc, 2DTS commandant said.

Burgos congratulated the 2DTS for successfully “re-orienting the happy-go-lucky teenage mentality of our soldier-applicants to the matured and disciplined military way of life.”

Rep. Josephine Ramirez Sato of Occidental Mindoro, who was the guest speaker during the graduation ceremony, commended the soldiers’ transformation “to becoming heroes of the modern time while continuously setting an example that inspired others to become heroes themselves.”

She also thanked the soldiers “for going to places where others dare not go and for instilling courage and pride upon the hearts and minds of the people by committing to fight and offering your lives to protect the sanctity of our national sovereignty and every inch of Philippine territory.”

The new soldiers were also trained to perform non-traditional military roles, such as humanitarian assistance and disaster response in times of crisis and calamities and in participation in community-based programs and activities.

The rookie soldiers will be deployed in 2nd ID units in the Calabarzon and the island provinces of Mindoro Oriental, Mindoro Occidental, Marinduque and Romblon.

Jadloc said the latest 2DTS graduates earned a rating of 92% after an evaluation conducted by the Philippine Army with a focus on soldier’s core competencies of marksmanship and navigation.

The 2DTS is also rated as the top training school across the entire Philippine Army, he added.

An Army private receives a monthly base pay of P29,000.

“With ads-ons, the new soldier will receive a gross earning of P40,000 a month,” Ternio said.