In Lumban, ‘burda’ with a twist 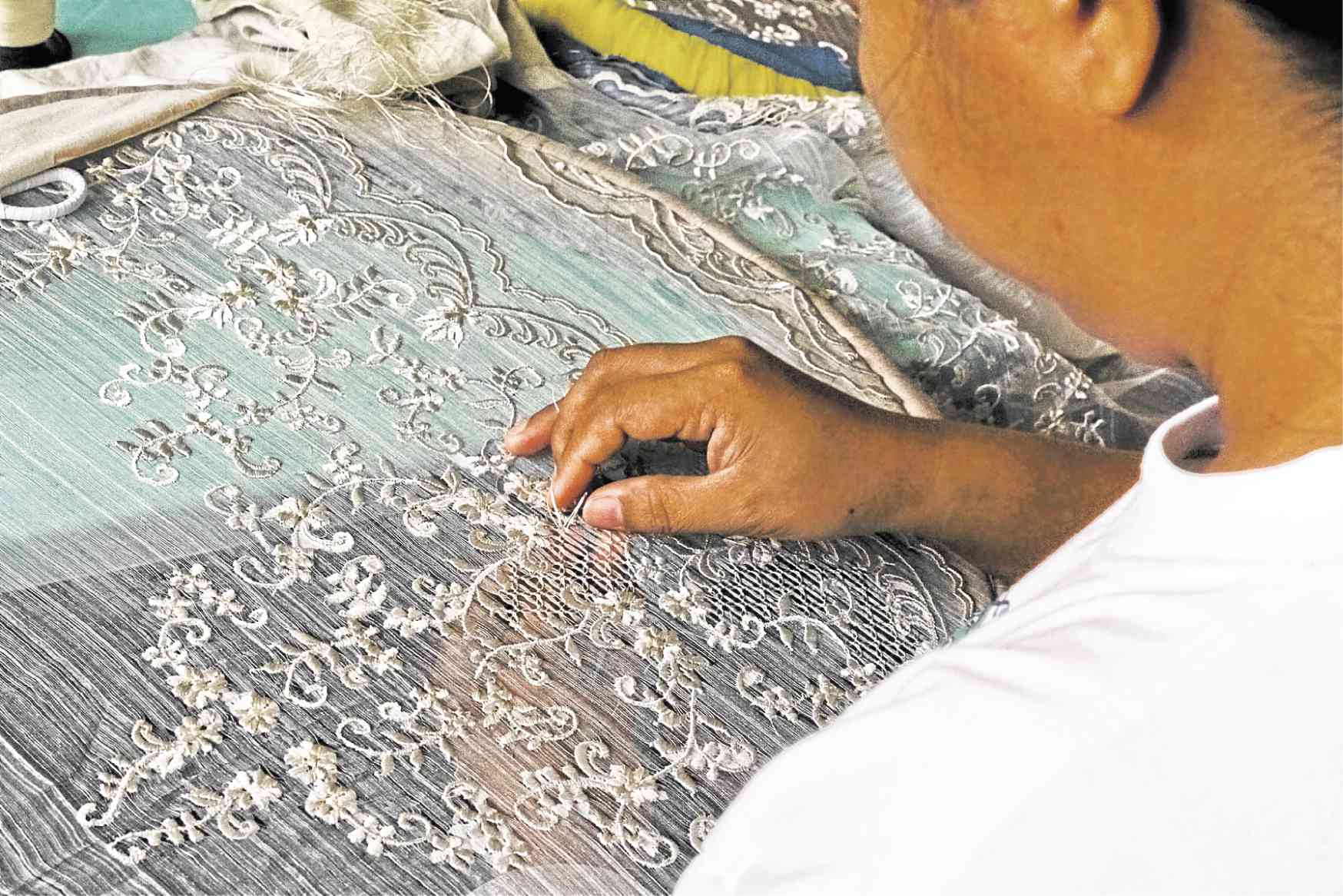 LIVELIHOOD Lumban’s “burdaderos” (embroiderers) bring to life unique and intricate designs through their skillful handling of thread and needle. Local embroidery shops have been providing livelihood to generations of families in the town. —PHOTOS BY CHRIS QUINTANA

LUMBAN, Laguna, Philippines — The traditional barong Tagalog and “terno” may be timeless, but a modern twist from two young designers from Lumban town in Laguna province gave this Filipino attire a fresh look, through an unlikely material in a family tablecloth.

Grace Bacsafra and Bryan Macabuhay bagged the top places for the terno and barong Tagalog categories, respectively, in the second fashion designers’ competition during the 18th Burdang Lumban Festival held in this town by the Laguna de Bay.

Bacsafra and Macabuhay, both in their early 30s, were first-timers to the competition and bested 12 other designers, several of them established names, from around Lumban, known as the embroidery capital of the country. 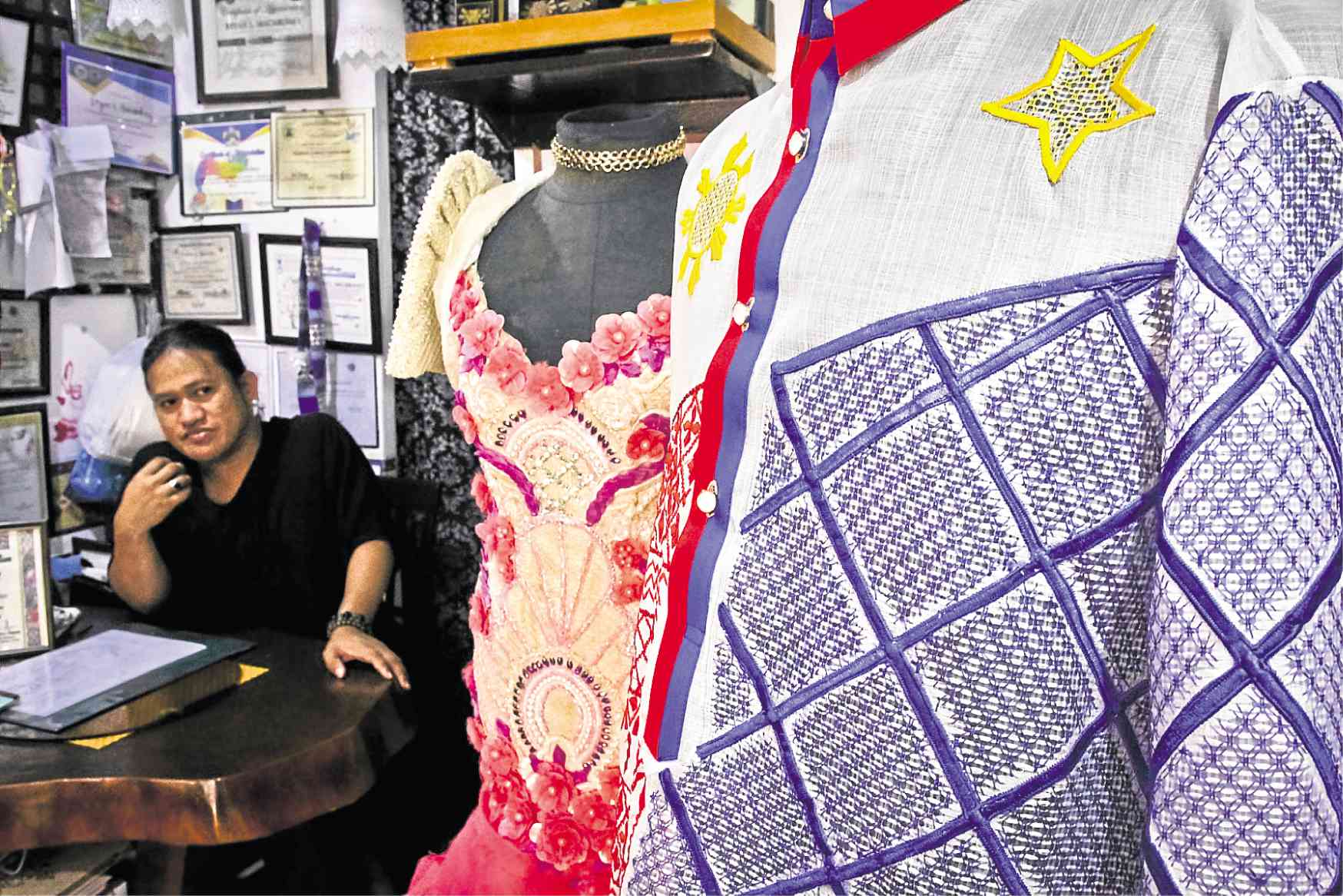 Young designer like Bryan Macabuhay ensure that the traditional “burda” (embroidery) of their hometown of Lumban in Laguna
provincewill live on through their creations.

The terno Bacsafra designed was made from a vintage 35-year-old embroidered jusi tablecloth with floral designs made of “tapado” (embroidery with filling to make it embossed) and “calado” (patterns created by unraveling cloth threads).

The cream-colored tablecloth is a family heirloom from the side of Bacsafra’s mother-in-law, Lilian, 70, chair of Lumban Marketing Cooperative, where Bacsafra serves as secretary.

The vintage tablecloth has a large floral central piece that was incorporated into the terno’s saya (skirt). The rest was made into other parts of the terno and Bacsafra’s barong Tagalog, which won second place.

Bacsafara was hesitant at first to use the tablecloth.

“The cloth was limited and it’s not that durable anymore because of its age. So I said to my team to be careful,” she said, as the unembroidered part of the tablecloth could tear at the slightest tug.

The terno took a week to make, she said, and the attachment of the beads took five more days. Feathers were added as well, and the overall look was a classic piece with a modern touch.

“I didn’t expect to win because I admit there are many great designers and they’re already veterans and well-known here in Lumban,” Bacsafra said, still in disbelief.

She said she almost gave up fashion designing, despite her fashion design degree, but decided against it so she could sustain the family business and the cooperative. 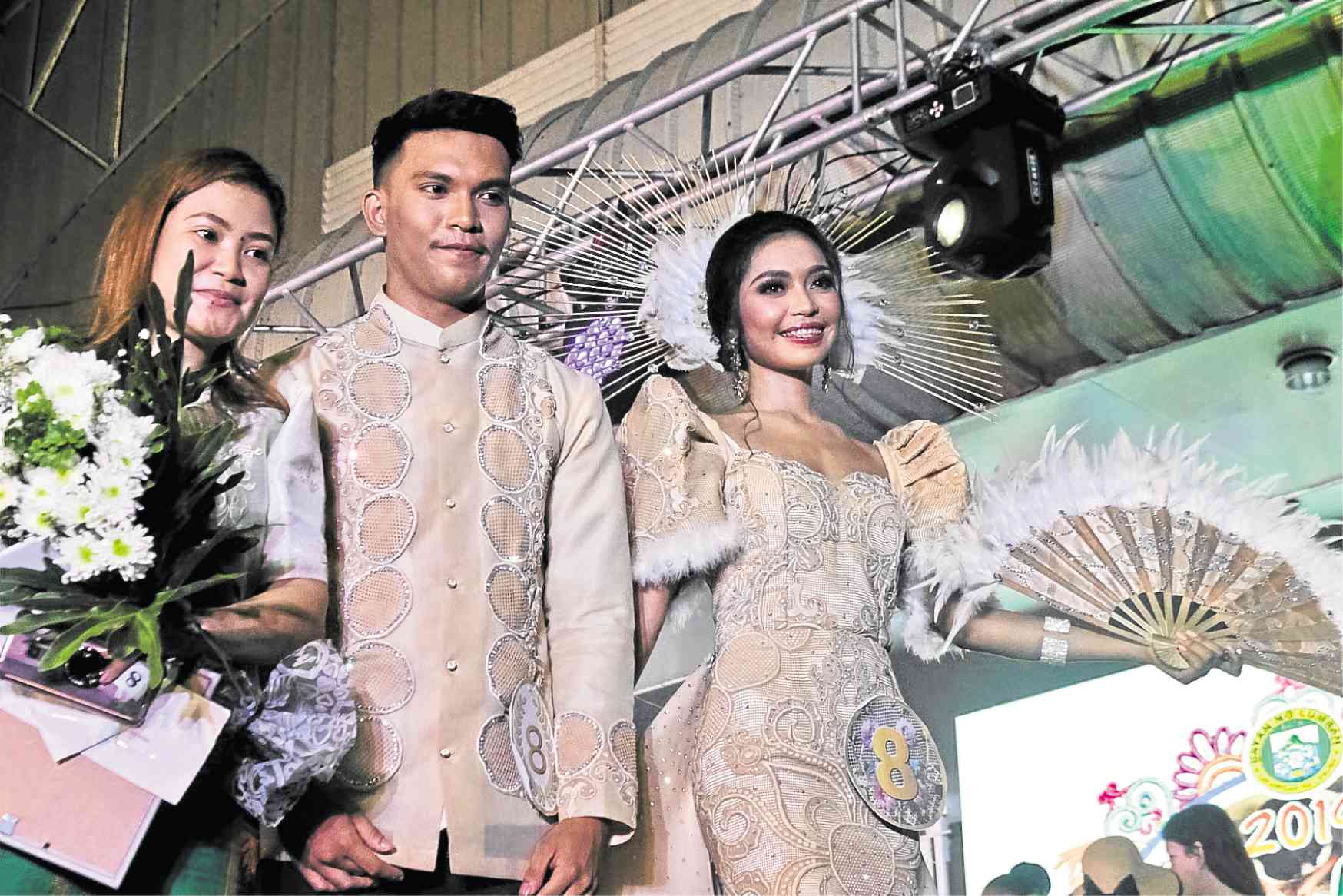 Bacsafra’s “terno” and barong Tagalog (center photo) are among thewinners in the fashion designers’ competition in the recent Burdang Lumban Festival.

One of the head-turners during the competition was a Philippine flag-inspired barong Tagalog that used red, blue and yellow embroidery threads, which was designed by Macabuhay, also known as “Madam Bryan” in this town. Macabuhay worked as a designer in Doha, Qatar, before returning home in 2011 to put up his own shop.

The left side and sleeve of the cocoon barong Tagalog feature blue calado, while the right side and sleeve have red machine-embroidered patterns derived from “malong” prints. The three stars and a sun are in yellow calado with an embroidered outline. The collar and button line are in blue and red.

Macabuhay’s winning barong Tagalog was a hit when its photos were posted on social media after the competition. “When people saw it on Facebook, an order came in for 14 pieces of this type and others with slightly varying designs,” he said.

The Great Gatsby-inspired terno that Macabuhay designed, on the other hand, won second place in the competition. Made of piña and embellished with embroidery, sequins, feathers and tassels, the terno is actually a three-in-one outfit that can be worn as a full dress, a top and a mini skirt.

Designer Ricky Abad, one of the contest’s judges, said the terno was “very Chanel,” according to Macabuhay. 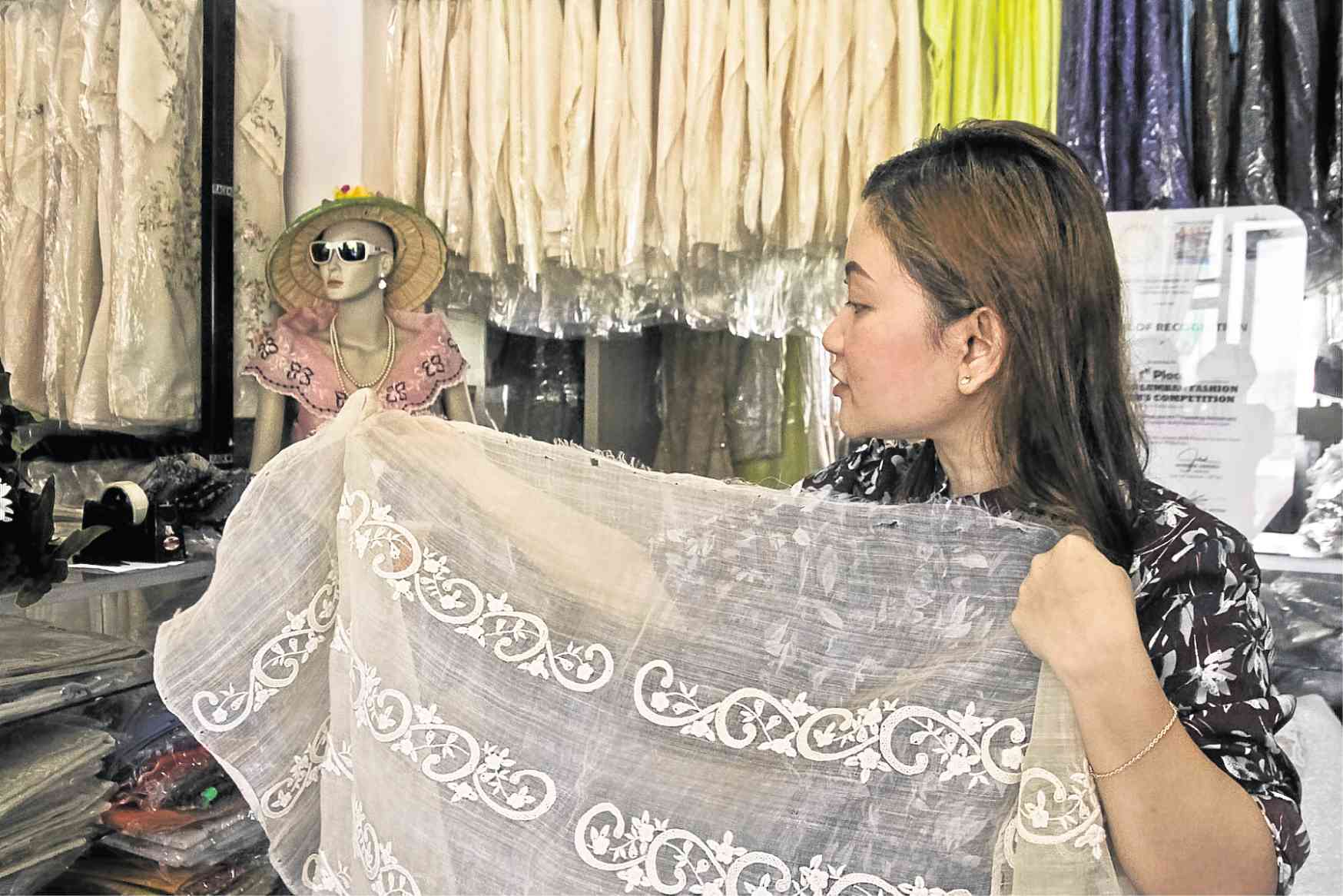 Being in the embroidery business could be tough on embroiderers and small business owners in Lumban. Some fear the centuries-old tradition might not survive as local embroiderers would rather look for jobs elsewhere due to low wages.

“Before, you earned only P50 from working from 6 to 10 in the evening,” Lilian said. But today’s wage rate is still low at P15 an hour, she said.

There is also the lure of easier jobs.

“It’s now easy to earn money. Instead of doing embroidery, they’d rather work in Manila. There are many jobs now where you get accepted even if you weren’t able to finish school,” Macabuhay said.

“Sometimes, even if there’s just a small spot, they’ll return it. They don’t want it anymore,” Macabuhay said.

“If you weren’t able to complete the 1,000 pieces within the agreed period, you would not get paid,” Lilian said, adding that a barong Tagalog costs at least P5,000 to produce.

Another challenge is the young’s dwindling interest in the craft.

“There will come a time that embroidery will vanish from our town,” said Macabuhay, who at a young age learned and did embroidery to pay for his schooling.

To cultivate interest among the youth, embroidery will be included in the K-12 curriculum in the town’s public schools by next year, according to Jayson Lagrada, head of the Lumban history, arts, culture and tourism office.

“The Sangguniang Bayan resolution for that is already done. This is a long process. The teachers who will teach embroidery will need to study. The local government will hold seminars and training for teachers,” Lagrada said.

With the planned inclusion of embroidery in the local curriculum and with the emergence of a new generation of designers like Bacsafra and Macabuhay, there is still hope that Lumban’s embroidery tradition will live on.