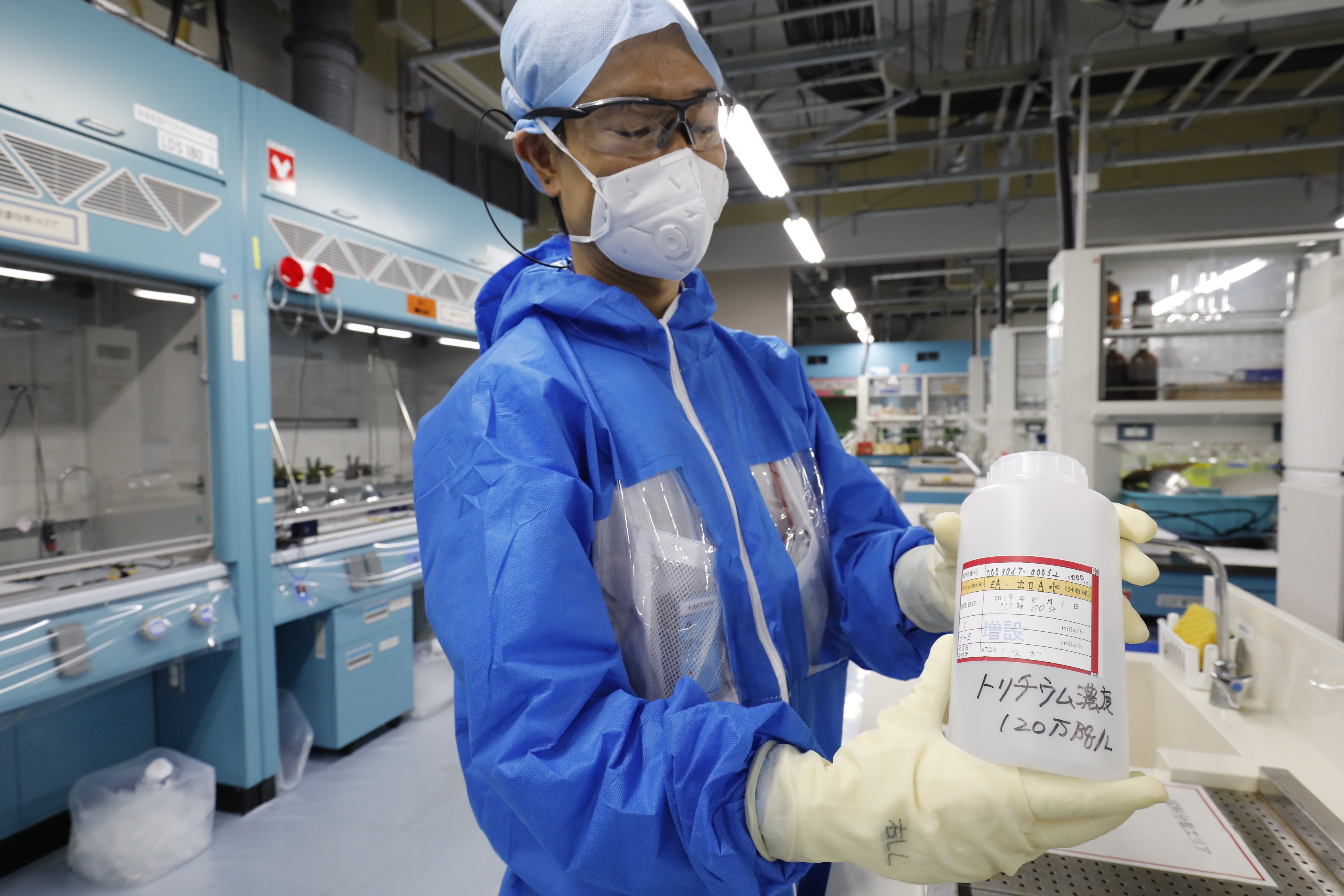 In this picture taken on October 2, 2019 a Tokyo Electric Power Company (TEPCO) researcher shows processed water where tritium remains, at a lab in Fukushima Dai-ichi nuclear plant in Okuma, Fukushima prefecture. – On the grounds of the ravaged Fukushima Daiichi nuclear plant sits a million-tonne headache for the plant’s operators and Japan’s government: tank after tank of water contaminated with radioactive elements. (Photo by Hitoshi KATANODA / POOL / AFP)

FUKUSHIMA, Japan — In the grounds of the ravaged Fukushima Daiichi nuclear plant sits a million-ton headache for the plant’s operators and Japan’s government: tank after tank of water contaminated with radioactive elements.

What to do with the enormous amount of water, which grows by around 150 tons a day, is a thorny question, with controversy surrounding a long-standing proposal to discharge it into the sea, after extensive decontamination.

The water comes from several different sources: some is used for cooling at the plant, which suffered a meltdown after it was hit by a tsunami triggered by a massive earthquake in March 2011.

Groundwater that seeps into the plant daily, along with rainwater, add to the problem.

A thousand, towering tanks have now replaced many of the cherry trees that once dotted the plant’s ground.

Each can hold 1,200 tons, and most of them are already full.

“We will build more on the site until the end of 2020, and we think all the tanks will be full by around the summer of 2022,” said Junichi Matsumoto, an official with the unit of plant operator TEPCO in charge of dismantling the site.

TEPCO has been struggling with the problem for years, taking various measures to limit the amount of groundwater entering the site.

There is also an extensive pumping and filtration system, that each day brings up tonnes of newly contaminated water and filters out as many of the radioactive elements as possible.

All those entering must wear elaborate protection: a full body suit, three layers of socks, three layers of gloves, a double cap topped by a helmet, a vest with a pocket carrying a dosimeter, a full-face respirator mask and special shoes.

Most of the outfit has to burned after use.

“The machinery filters contain radionuclides, so you have to be very protected here, just like with the buildings where the reactors are,” explained TEPCO risk communicator Katsutoshi Oyama.

TEPCO has been filtering newly contaminated water for years, but much of it needs to go through the process again because early versions of the filtration process did not fully remove some dangerous radioactive elements, including strontium 90.

The current process is more effective, removing or reducing around 60 radionuclides to levels accepted by the International Atomic Energy Agency (IAEA) for water being discharged.

But there is one that remains, which cannot be removed with the current technology: tritium.

Tritium is naturally present in the environment, and has also been discharged in its artificial form into the environment by the nuclear industry around the world.

There is little evidence that it causes harm to humans except in very high concentrations and the IAEA argues that properly filtered Fukushima water could be diluted with seawater and then safely released into the ocean without causing environmental problems.

But those assurances are of little comfort to many in the region, particularly Fukushima’s fishing industry which, like local farmers, has suffered from the outside perception that food from the region is unsafe.

Kyoichi Kamiyama, director of the radioactivity research department at the regional government’s Fisheries and Marine Science Research Centre, points out that local fishermen are still struggling eight years after the disaster.

“Discharging into the ocean? I’m absolutely against it,” he told AFP.

At the national government level, the view is more sanguine.

“We want to study how to minimize the damage (from a potential discharge) to the region’s reputation and Fukushima products,” an Industry Ministry official said.

The government is sensitive to fears that people inside Japan and further afield will view any discharge as sending radioactive waste into the sea.

No decisions are likely in the near-term, with the country sensitive to the international spotlight that will fall on Japan as it hosts the Olympic Games next year.

Environmentalists are also resolutely opposed to any discharge into the sea, and Greenpeace argues that TEPCO cannot trusted to properly decontaminate the water.