Man electrocuted in bed next to charging phone | Inquirer News

Man electrocuted in bed next to charging phone 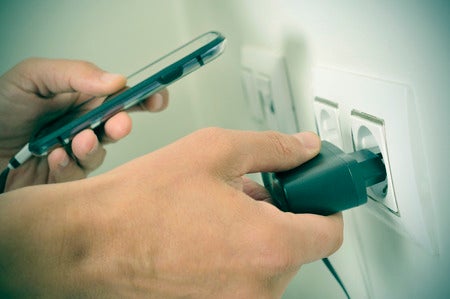 Police said the cause of death of a man in Thailand was “electrocution by mobile phone.”  Image: INQUIRER.net Stock Photo

A man in Thailand was found dead next to a phone being charged through an extension cord on Sept. 28. Police attributed his death to electrocution.

The 25-year-old man, identified as Sastra Mo-in, was found by his aunt Watchareeporn Mo-in at 11:30 a.m. in his room, reported MGR Online via Daily Mail on Oct. 2.

His aunt came into the room to clean it and found her nephew on his mattress on the floor, his hand near a smartphone plugged to a charger. A handheld gaming console and another mobile phone, both not being charged, were next to him too.

She said her nephew constantly played video games and would fall asleep while gaming or while his gadgets were still plugged.

The aunt noticed his body was purple and his left hand had burn marks, and proceeded to turn off the electrical supply. She called the police, who confirmed his death on the scene.

The man’s body was subjected to a post-mortem examination, which concluded that the cause of death was “electrocution by mobile phone.” The death was not treated as suspicious.  Niña V. Guno /ra

Teen dies by electrocution while using headphones of charging phone

Woman in Malaysia electrocuted to death while talking on charging phone