‘Are you talking to me?’ Trump’s anger on impeachment erupts 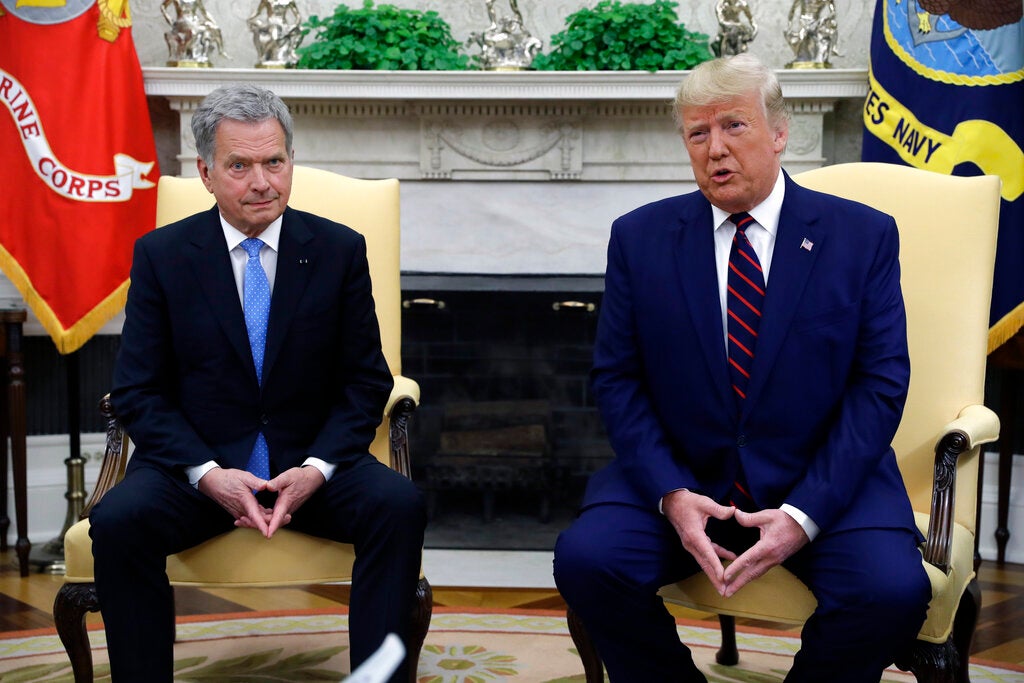 WASHINGTON  — “Are you talking to me?”

Jaw thrust forward and ready to rumble, President Donald Trump plowed his way through a day of questions Wednesday about his controversial phone call with Ukraine’s leader, his private anger about the House impeachment effort bursting into full public view.

“Did you hear me? Did you hear me? Ask him a question,” the president, pointing to his counterpart from Finland, irritably told a reporter who pressed Trump to answer a question during a surreal and scorching White House news conference.

For days, the president had seethed about the Democrats’ rapidly moving inquiry that threatens to overwhelm his presidency. He insisted he did nothing wrong in what he repeatedly dubbed “a perfect call” with Ukrainian President Volodymyr Zelenskiy, in which he asked for an investigation of political opponent Joe Biden. Trump’s rage behind closed White House doors found myriad targets: Democrats, the media, his own staff, the faltering performances of Republicans trying to defend him on television.

Though the president had let off some steam on Twitter, it took until Wednesday’s meetings with Finnish President Sauli Niinisto for Trump to erupt. Lacking a strong White House response team or many allies willing to make his case, while always believing that he is his own best spokesman, Trump became a one-man war room as the afternoon went on.

It featured the usual talk about strong cooperation between the two nations. Trump offered America’s condolences for an attack the day before at a vocational school in Finland in which a man wielding a sword and a firearm killed a woman and wounded nine others.

But Niinisto, who appeared bewildered in the Oval Office hours earlier during a previous Trump tirade, found his footing at the news conference. He seemed to send a subtle message when he remarked how he had spent part of his time in Washington prior to his White House meeting by visiting a couple of museums.

“You have here a great democracy. Keep it going on,” he told the president.

Trump soon turned to trade. The president, as he often does, complained about the trade deficit in goods with EU countries, which hit $169.3 billion last year.

“We’re gonna have to start doing something with the European Union because they have not been treating this country right for many, many years. And they know it,” Trump said.

But Niinisto tried to emphasize a different story: “Well, we all know Europe needs USA, but I say that USA needs also Europe,” Niinisto said. “We know the price of everything. We should recognize also the value of everything. We share the same values: democracy, human rights, rule-based order. And in that we are very similar.”

But those grand sentiments soon gave way to questions about dirty politics.

Furious about the impeachment inquiry, Trump said he was under attack for three years, blasted the completed special counsel’s Russia probe and said he was considering filing a major lawsuit, though he didn’t say who it would be against.

“We’ve been investigating the corruption having to do with what they did to my people,” Trump said. “They destroyed many people. They came down to Washington to do a great job and they left home, they left Washington dark.”

He said House Speaker Nancy Pelosi hands out subpoenas like they’re cookies. “Every day, you get subpoenas.”

His ire only grew when one reporter, Jeff Mason from Reuters, asked Trump to make clear what he wanted the president of Ukraine to do with regard to former Vice President Joe Biden and his son Hunter.

Trump dodged with a non-answer, saying he did not like giving money to a corrupt country. “I don’t like being the sucker country,” he said. “European countries are helped far more than we are and those countries should pay more to help Ukraine.”

But when the reporter followed up about what he wanted Ukraine to do about the Bidens, Trump angrily tried to stop the inquiry, backing away from the podium and asking, “Are you talking to me?” while trying to badger Mason to stop.

Preferring to take his questions in informal settings, like the White House lawn against the backdrop of a whirring helicopter, making it easier to skip inquiries he didn’t like, Trump seemed ill-prepared to handle Mason’s follow-ups.