Greta Thunberg heads to US Midwest for Friday climate protest

NEW YORK – After protests in New York and Montreal, teen activist Greta Thunberg has said she will join demonstrators in Iowa in the US Midwest on Friday for the latest “climate strike.” 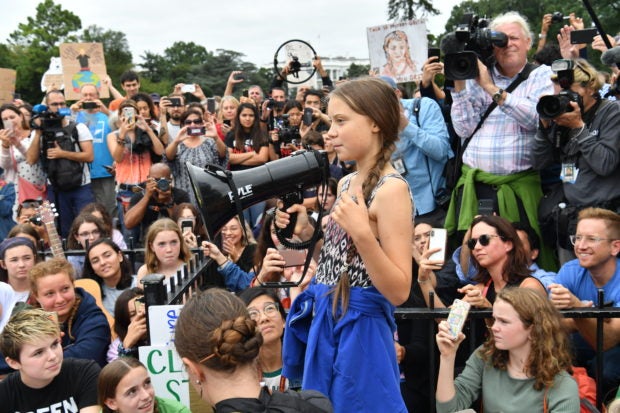 (FILES) In this file photo taken on September 13, 2019 Swedish environment activist Greta Thunberg speaks at a climate protest outside the White House in Washington, DC. – After protests in New York and Montreal, teen activist Greta Thunberg has said she will join demonstrators in Iowa in the US Midwest on October 4, 2019 for the latest “climate strike.” (Photo by Nicholas Kamm / AFP)

The 16-year-old Swede generated headlines around the world last week with her so-called “How Dare You?” speech at the UN climate summit, accusing world leaders of betraying her generation.

“This Friday I’m happy to say that I’ll join the climate strike in Iowa City!” Thunberg said on Twitter on Wednesday, using the movement’s hashtag “Fridays For Future.”

“All we’re saying is unite behind the science and listen to the scientists,” she added.

Thunberg has inspired millions of youngsters through her passion and her mature rhetorical style — articulated in near-perfect English — that belies her age.

She said this week that she was slowly travelling through North America to her destination Santiago, Chile, where she is due to attend another UN climate conference in December.

Thunberg, who arrived in the US from Britain on a carbon-neutral yacht, is now travelling by electric vehicle, a spokeswoman said. /gsg