‘Narda’ dissipates, but still likely to bring rain to US 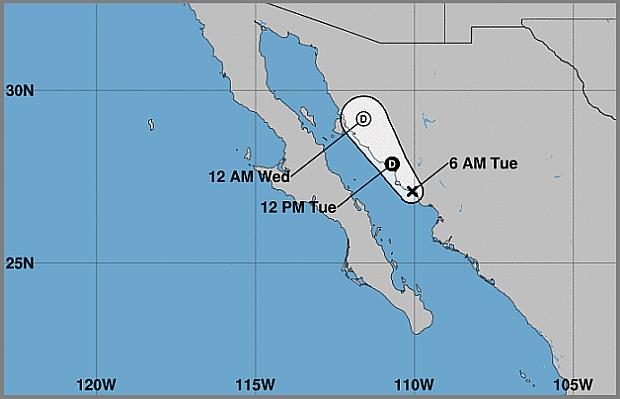 MEXICO CITY — Tropical Storm “Narda” dissipated Tuesday after soaking hundreds of miles of the Mexican coastline in recent days, but forecasters said its remnants were likely to dump rain across parts of northwestern Mexico and the U.S. Southern Plains.

The U.N. National Hurricane Center said moisture from Narda remained a “threat for flash flooding in those areas.”

In its soggy, dayslong journey along Mexico’s Pacific coast, the storm whipped palm trees and drenched the resort city of Mazatlan with sheets of rain, swamping streets and causing some property damage. Earlier it passed over Puerto Vallarta, another popular beach destination.

Mexican media reported two deaths occurred in the southern state of Oaxaca as Narda passed by on Sunday: a 26-year-old man who died while trying to cross a river in San Pedro Mixtepec and a 17-year-old boy who was swept away in a river at San Jeronimo.

Meanwhile in the Atlantic, Category 2 Hurricane Lorenzo was nearing the western Azores, which were expected to see hurricane conditions by early Wednesday.

Lorenzo had maximum sustained winds of 100 mph (155 kph) early Tuesday and was centered about 385 miles (620 kilometers) southwest of Flores in the western Azores, a Portuguese island chain. It was moving to the northeast at 25 mph (41 kph).

The long-term projection could potentially bring it near Ireland and Scotland by Friday.

Lorenzo was previously a Category 5 hurricane, the strongest storm ever observed so far north and east in the Atlantic basin. /jpv