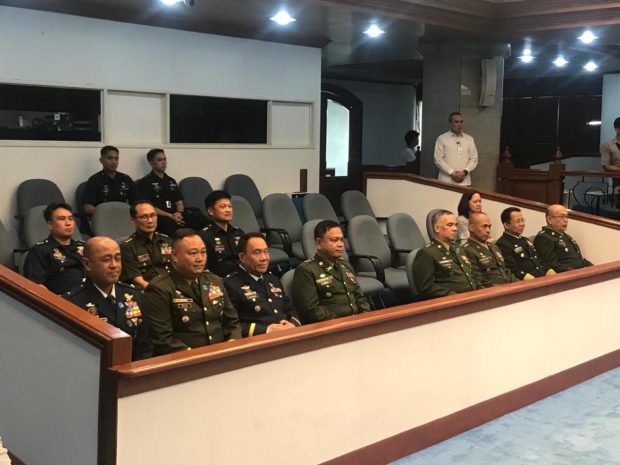 Senior officials of the Armed Forces of the Philippines sit before the Commission on Appointments which approved on Wednesday, October 2, 2019 their ad interim appointments and nominations. INQUIRER.net / Cathrine Gonzales

MANILA, Philippines —The ad interim appointments and nominations of eight senior officers of the Armed Forces of the Philippines (AFP) were approved by the Commission on Appointments (CA) on Wednesday.

Those whose ad interim appointments were approved by the CA were Col. Adonis Bajao and Col. Ernesto Levanza to the rank of brigadier general or a one-star rank.

Meanwhile, those whose nominations were also approved were Brig. Gen. Ferdinand Cartujano to the rank of Major General; Col. Rodolfo Lavadia Jr., Col. Vener Odilon Mariano, Col. Pablo Rustia Jr., and Col. Ferdinand Fraginal to the rank of Brigadier General, and; Capt. Jose Ambrosio Ezpeleta to the rank of Commodore.

Prior to the approval of the CA, the Senate Committee on National Defense has recommended the appointments and nominations of the said senior officials. /jpv