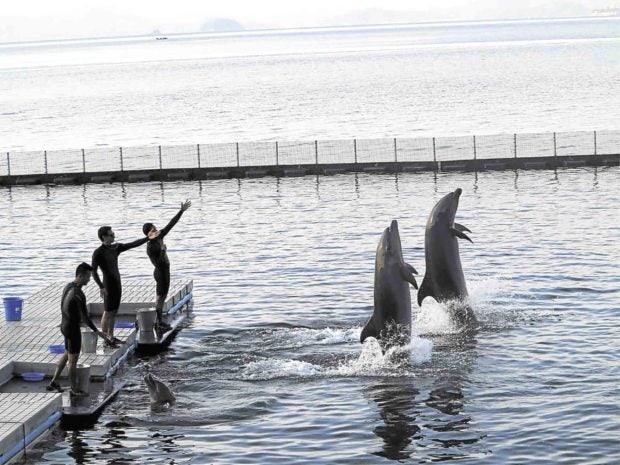 SUBIC BAY FREEPORT, Zambales, Philippines — The Subic Bay Metropolitan Authority (SBMA) has preterminated its lease contract with the operator of marine theme park Ocean Adventure here for alleged violations but has not closed its door for renegotiation.

Wilma Eisma, the SBMA chair and administrator, on Friday served the foreclosure order to Subic Bay Marine Exploratorium Inc. (SBMEI), citing the company’s failure to comply with its lease agreement and development commitments.

According to Eisma, the SBMA had notified SBMEI of its violations in July and offered to help address these.

“We wanted them (SBMEI) to stay, of course, but there was not much concrete action from their side. So after months of negotiation and attempts to help SBMEI keep its lease, there is no longer any other recourse but to apply the law and preterminate the company’s lease agreement,” Eisma said in a statement.

“We’re firm but fair. We agree that the SBMA should adhere to the ease of doing business law, but that doesn’t mean we’d relax our rules to the detriment of the government,” she said.

According to Eisma, the SBMA will repossess all of SBMEI’s 493.16 hectares of undeveloped property after the 30-day reckoning period lapses.

The SBMA also gave SBMEI two years to slow down its activities at the 11.6-ha developed area that includes Ocean Adventure, the Camayan Beach and the newly opened Adventure Beach Waterpark.

“We’re giving them sufficient time to wind down their operations at the marine park, remove all their animals and movable property, and vacate the premises,” Eisma said.

But Robert Gonzaga, SBMEI president and chief executive officer, on Sunday said the SBMA’s actions were “uncalled for and premature.”

“It was apparent that Eisma and some SBMA officials resented the fact that we spoke out. But President Duterte himself has said so many times that everyone should speak out and speak up about gross inefficiencies of government and questionable actions of officials in his administration,” Gonzaga said in a statement.

He said he and other locators had appealed to the SBMA to shorten the processing time and cut the number of requirements in transactions in the free port, as mandated in the law on ease of doing business and efficient government service delivery (Republic Act No. 11032).

“[But] it seems we are being penalized for [speaking out]. Our investments had been held hostage, and we were no longer able to process permits and push through with any kind of development in our property,” Gonzaga said.

He said the pretermination order came while SBMEI was meeting with the SBMA’s business group to address the impending closure of the theme park.

Gonzaga said the order left “an immediate and negative impact on [SBMEI], prompting concerned calls from tour operators, suppliers and other stakeholders.”

The lease agreement of SBMEI was signed in 2007 under the administration of former SBMA Administrator Armand Arreza and the late SBMA Chair Feliciano Salonga.

Gonzaga said SBMEI’s master plan was approved by the SBMA in 2010 but a dispute on issuance of permits delayed the property development. He said it took the SBMA two years to pass four board resolutions that resulted in a draft lease amendment, which was sent to SBMEI in 2015.

“We’d like to assure everyone that the SBMEI board is actively engaged, and the management of SBMEI is addressing these issues … Rest assured that there will be no disruption to our business operations as a result of this,” Gonzaga said.