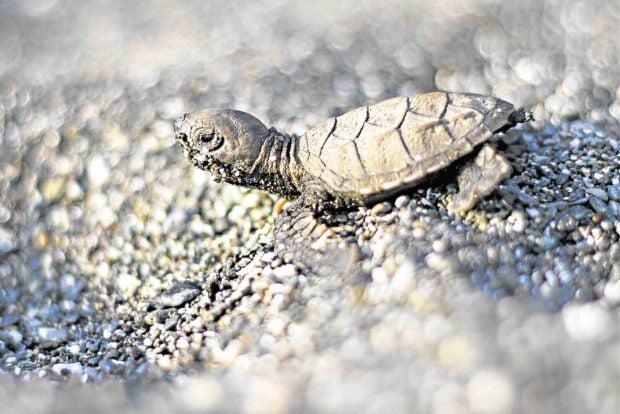 in Magsaysay, Misamis Oriental, in August crawls toward the sea. Sixty-five other turtle eggs were spoiled after water reached nesting sites in the coastal community. —ERWIN MASCARIÑAS

BUTUAN CITY, Agusan del Norte, Philippines — Rolando Pagara feels sad every time he recalls the hundreds of hawksbill turtle hatchlings that have not made it to the sea in his hometown of Magsaysay in Misamis Oriental province.

A councilman at Barangay Candiis, Magsaysay, Pagara has been involved in turtle conservation in the last 20 years, an effort that was boosted by the declaration of some 612 hectares of the town’s coastal area as critical habitat for hawksbill turtles (Eretmochelys imbricata).

Today, sea turtles nesting in his hometown have to surmount an environmental hurdle to ensure the species’ survival.

Environment officials and conservationists are blaming rising tides associated with the changing climate for the destruction of nesting sites of the endangered hawksbill turtles in Misamis Oriental.

Virgilio Alemana Jr., coastal management chief of the Community Environment and Natural Resources Office (Cenro) in Gingoog City, said his team had been monitoring an increase in the number of spoiled turtle eggs since 2018 because their nesting places had been flooded by the tides.

Alemana said this explained the decrease in the number of live turtle hatchlings.

He said that while population of adult sea turtles nesting along Misamis Oriental’s coasts was stable, the decrease in hatchlings was a cause for concern.

In August, an entire sea turtle nesting site in Salay town was flooded by the tide, spoiling all eggs that were supposed to hatch in September, he said.

In another site in Salay, 57 hatchlings were released recently. But the number was less than half of the expected hatchlings to be released as the rest of the eggs were spoiled by rising sea water, Alemana said.

Conservationists have also recorded a decline in the number of sea turtle eggs hatched in Magsaysay since 2012.

At least 630 hatchlings, from six nesting sites at Candiis village, were released in 2017. Pagara, however, said that by 2018, the number of hatchlings released in the town went down to 580.

Pagara said they were expecting that fewer hatchlings would be released this year.

He said only 50 hatchlings, out of 115 eggs, were produced in one nesting site in August.

In July, only five hatchlings were produced out of 120 eggs. In another nest, only 40 hatchlings, out of 153 eggs, were released into the sea.

Alemana said sea turtles carried with them an imprint of the beach where they were hatched, hence had the unique ability to return to the same site to nest, repeating what could be an ancient ritual for their species.

But Alemana’s team and local conservationists are intervening to protect the turtle eggs from the tides by transferring these to an area safe from the waves but just near where these were nested. 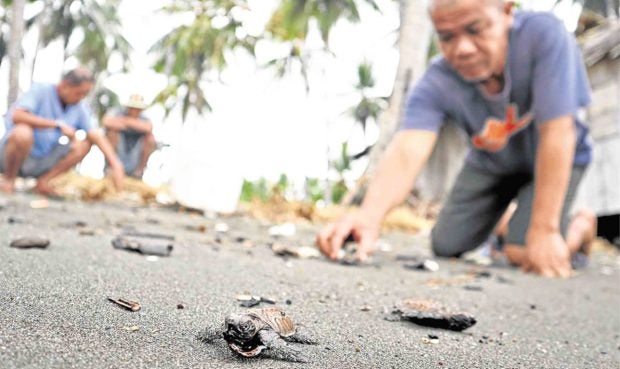 CONSERVATION Rolando Pagara, one of the leaders of the “pawikan” (sea turtle) conservation program in Magsaysay town, makes sure that sea turtles hatched in his village of Candiis are protected until they are ready to be released into the wild. ERWIN MASCARIÑAS

Last July, the Cenro released into the wild 150 hatchlings produced from 165 eggs nested in the coasts of Duka Bay.

“We have a higher survival rate of eggs reaching the stage of hatching when we transfer them,” Alemana said.

The challenge is to monitor all nesting sites along the province’s coastline.

A 2013 study by Fra-And Timothy Quimpo of sea turtles in Macajalar and Gingoog bays recorded four species nesting in the coasts of 11 towns.

The hawksbill and the green sea turtle (Chelonia mydas) are the most common species. The olive ridley (Lepidochelys olivacea) and leatherback turtles (Dermochelys coriacea) are also found in the province.

The hawksbill turtle predominantly nests in the coasts of five towns year-round, peaking during the first three months of the year.