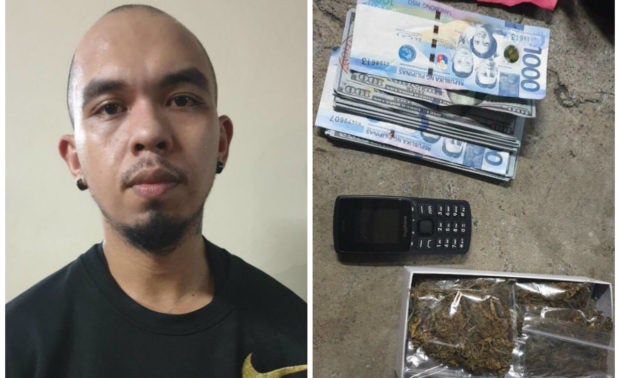 Loonie, who shot to fame for his performances in the FlipTop professional rap battle, was arrested in a drug bust by the Makati police on Wednesday night, Sept. 18, 2019, just months after he said he was lying low for security reasons. (Photos from the Makati City Police Station)

MANILA, Philippines — The Makati City Office of the Prosecutor has indicted FlipTop rapper Loonie, whose real name is Marlon Peroramas, and three others in drug cases filed against hem.

In an order on Wednesday, Loonie, his younger sister Idyll Liza Peroramas, and David Rizon were charged with violating Section 5 of the Comprehensive Dangerous Drugs Act of 2002 — that is, for selling illegal drugs. No bail was recommended.

Loonie and Rizon, along with Ivan Agustin, were also charged with violating Section 15 of the Comprehensive Dangerous Drugs Act — that is, for using illegal drugs. Bail of P3,000 was recommended for each of them.

Loonie and his five accomplices were arrested last week for allegedly selling P100,000 worth of kush, which is high-grade marijuana, to an undercover law enforcer.