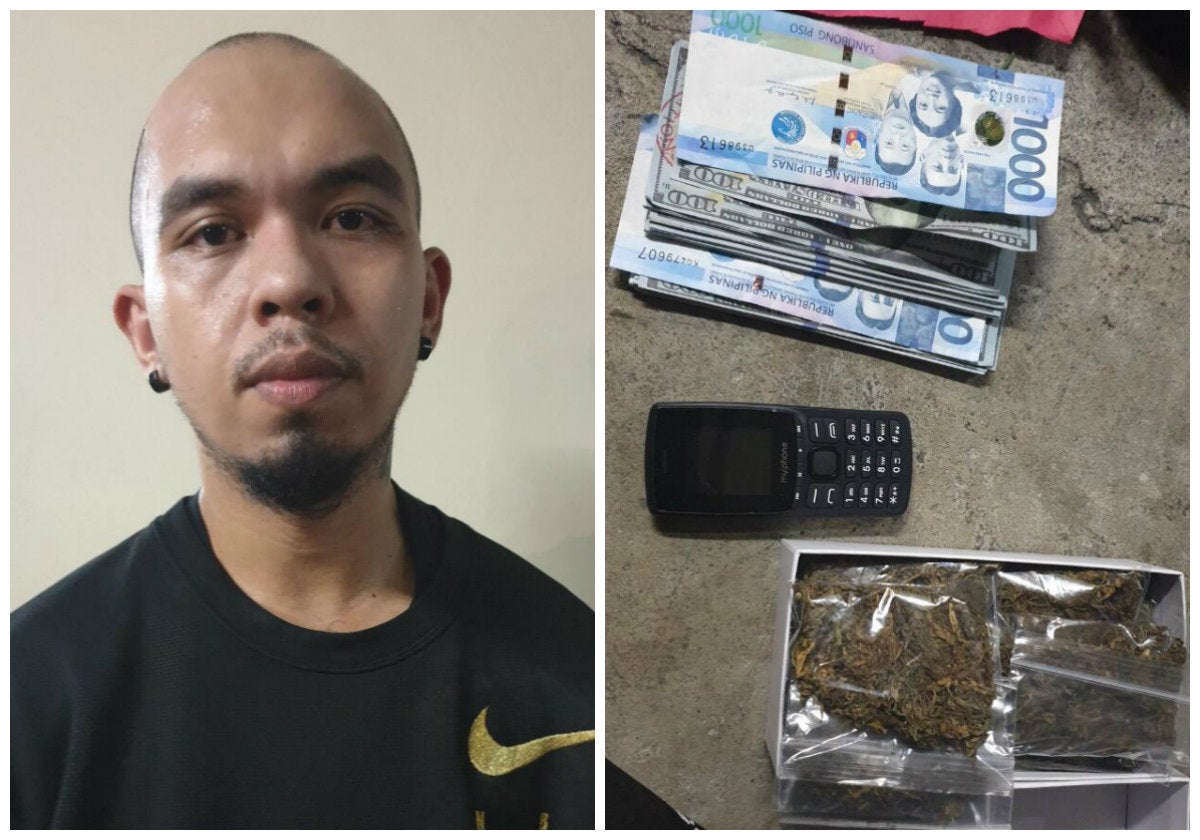 RAPPER ENTRAPPED Loonie, who shot to fame for his performances in the FlipTop professional rap battle, was arrested in a drug bust by the Makati police on Wednesday night, just months after he said he was lying low for security reasons. —Photos courtesy of Makati police

FlipTop rapper Loonie was arrested on Wednesday after he and his companions allegedly sold P100,000 worth of “kush” or high-grade marijuana to an undercover agent at the basement of a hotel in Makati City.

Although the 33-year-old artist admitted to using marijuana, he denied that the seized drugs were his and accused authorities of a frameup.

Loonie, whose real name is Marlon Peroramas, was arrested with his younger sister and manager Idyll Liza and their companions David Rizon, Ivan Agustin and Albert Alvarez in a buy-bust operation on Polaris Street, Barangay Poblacion at 8:45 p.m. on Wednesday.

According to Police Col. Rogelio Simon, the Makati police chief, the suspects sold to a poseur buyer 15 packs of kush hidden in a cell phone box for  P100,000. After their group received the money, the police arrested them.

Peroramas said that he was framed and accused the police of planting the evidence against him.

He claimed that he and his companions went to the hotel to attend the birthday party of a leukemia-stricken fan.

Simon, however, told reporters that he and his men had evidence, including several text messages and footage from a  closed-circuit television camera, to prove that the buy-bust operation was legitimate.

He said that they had been monitoring Peroramas for more than a month based on a tip from a “very reliable confidential informant close to the suspect.”

According to Simon, his men went to the performances of the FlipTop rap battle star in Makati City and befriended him. “From these, we have confirmed that he completes his transactions of distributing kush on the same day as his gigs,” he added.

Peroramas and the other suspects remain detained at the Makati police station. They were formally charged in the Makati City Prosecutor’s Office on Thursday with nonbailable offenses of violation of Sections 5 (drug trading) and 13 (drug possession in social gatherings) of Republic Act 9165.

The rapper gained prominence in the world of FlipTop professional rap battle, competing against local hip-hop artists, including Zaito, who was arrested in April 2018 in his house in Cavite for possession of “shabu” or crystal meth.

Both Peroramas and Zaito were self-professed supporters of President Duterte.

In May, Peroramas said he was going “off the grid” for “security reasons” as his manager cited drug accusations against him.

“We condemn these people who keep accusing Loonie of using shabu and other intravenous drugs,” his manager said in a statement.

“It’s so easy for these people to carelessly accuse known celebrities and even politicians, without even thinking that they are putting the life of the accused in danger, especially now with the government’s war on drugs,” the statement read.

The rapper gained fame in mainstream music after the release of his song, “Tao Lang” in 2012, which featured singer-songwriter Quest.

The song’s official music video, which features a man admitting his faults and asking for forgiveness, has been viewed over 15 million times on YouTube.