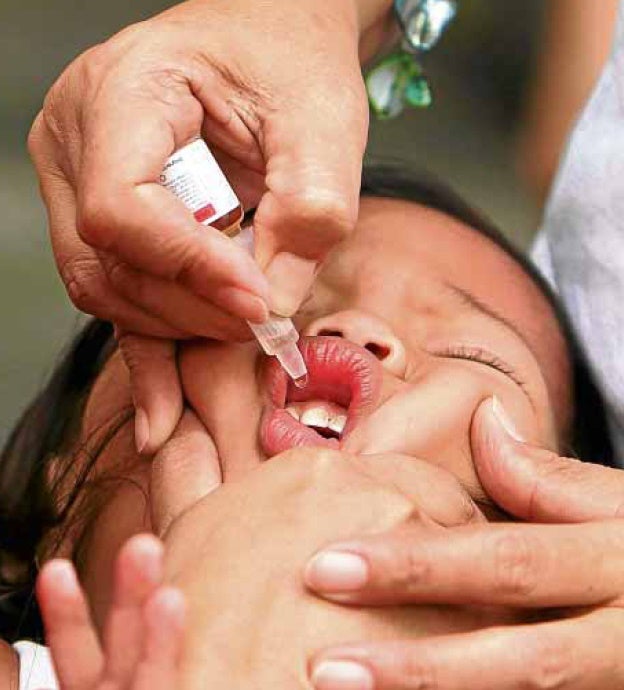 ORAL VACCINE AGAINST POLIO The Department of Health says it will conduct synchronized oral polio vaccinations starting October to protect children under 5 years old against the polio virus. —INQUIRER PHOTO

The Philippines is in the midst of a polio epidemic 19 years after it was declared polio-free, Health Secretary Francisco Duque III announced on Thursday.

Polio is a crippling and at times fatal infectious disease. (See In the Know.)

Duque said a single confirmed case signaled an epidemic in a once polio-free country.

He said a 3-year-old girl from Lanao del Sur was diagnosed with a vaccine-derived polio virus type 2.

The Department of Health (DOH) is awaiting confirmation of a suspected case of acute flaccid paralysis (AFP).

Rabindra Abeyasinghe, country representative of the World Health Organization (WHO), noted that the type 2 polio virus had not been in circulation for many years and was certified eliminated in the Philippines.

“[S]o the vaccination program that the DOH and other countries implement does not contain vaccine specifically targeting type 2 in the oral polio vaccines,” Abeyasinghe said after Duque announced the polio epidemic.

WHO declared the Philippines free of the disease in 2000.

The health department has also detected poliovirus in samples taken from sewage in Metro Manila and Davao City.

Duque, however, clarified that the DOH had yet to find human cases of polio in the areas.

The onset of illness started on June 26. The case was confirmed by the National Institute of Infectious Diseases on Sept. 14.

“Polio is an infectious disease which spreads rapidly. It can cause paralysis and, on rare occasions, can be fatal,” Duque said at a press briefing.

“There is no cure for polio,” he added. “It can only be prevented with multiple doses of polio vaccines that have long been proven safe and effective.”

A single child infected with polio could put others at risk, according to WHO.

Children 5 years and below are at risk of the infectious disease.

“The DOH … is preparing a rapid response to the polio outbreak. This includes a series of synchronized oral polio vaccinations to protect every child under the age of 5 years in areas at risk beginning in October,” Duque said.

The average national polio vaccination coverage is 66 to 68 percent, according to the health secretary. The goal is to bring the average to 95 percent.

The low turnout of the national immunization drive was due to several factors, like a caregiver who did not want a child to be vaccinated, Duque said.

He also cited the Dengvaxia controversy as one of the factors that contributed to low public confidence in vaccines.

Duque identified poor coverage, poor environmental sanitation and hygiene, and suboptimal AFP surveillance as the factors that brought about the relatively low immunization rate for polio.

The polio virus can be transmitted through fecal-oral route contamination.