UP, Mapua student leaders want Marcoses barred from their campuses 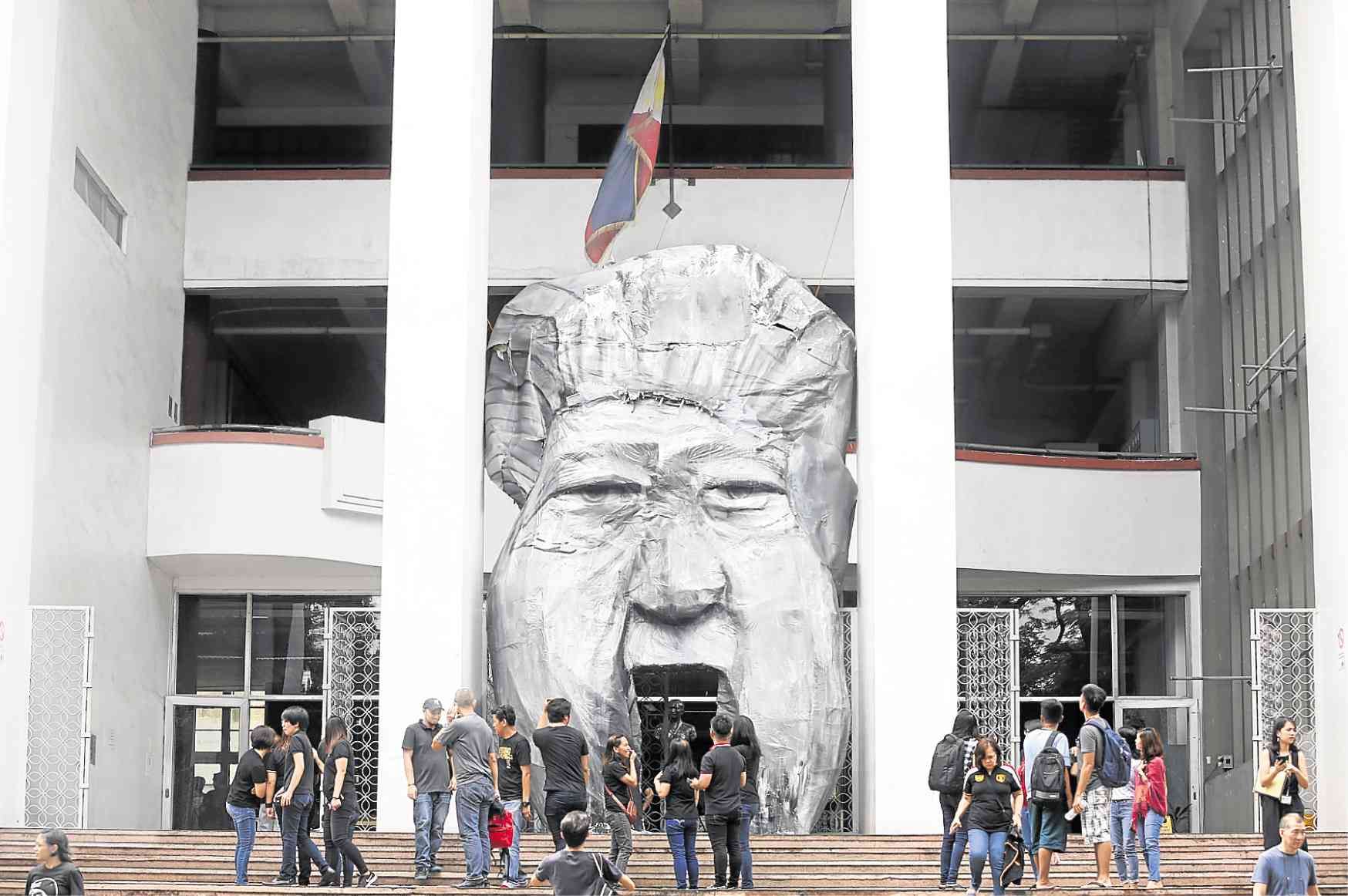 NEVER FORGET THIS FACE In time for the 47th anniversary of the declaration of martial law during the Marcos regime, which student activists are marking on Saturday, a papier-mâché depicting the late dictator has been installed at the entrance of Palma Hall on the University of the Philippines Diliman campus in Quezon City. —Niño Jesus Orbeta

Student leaders from two universities known for their history of activism want their campuses to be declared off-limits to members of the Marcos family, alleging that the presence of the late dictator Ferdinand Marcos’ widow and children “endangers students’ lives and freedoms.”

A resolution declaring the Marcoses persona non grata was signed on Thursday by student council members of the University of the Philippines (UP) and Mapua University. They plan to enlist support from more schools in the coming days.

At a press conference in Quezon City, the youth leaders said the resolution was prompted by the controversial visits of Imee Marcos to UP Diliman in 2018 for a Kabataang Barangay (KB) reunion and sister Irene Marcos to both UP Diliman and Ateneo de Manila University (Admu) this year for cultural events.

The siblings’ presence drew flak from some students, alumni, faculty members and netizens who noted the history of these universities as cradles of youth activism that was suppressed by the Marcos dictatorship.

“Their right to enter these universities was revoked after they started killing student leaders one by one during martial law,” said Renzo Relente of the UP Diliman University Student Council (USC). “Academic spaces are first and foremost a space for knowledge and the safety of students.”

The proponents of the ban noted how the Marcoses had evaded jail time and refused to apologize despite the well-documented atrocities committed during martial law, whose 47th anniversary will be marked by the nation on Saturday.

“Their presence in our schools is a threat not just to safety but to the history we are fighting to protect,” said Relente, citing Marcoses’ efforts to whitewash the martial law years, having regained influence and political power under President Duterte.

Ace Catling, a member of Mapua student council, brought up the case of Archimedes Trajano, a Mapua student activist who was killed in 1977 after he publicly questioned Imee Marcos’ qualifications as appointed director of KB, a nationwide government youth organization.

The District Court of Honolulu, Hawaii, in 1993 found the dictator’s daughter civilly liable for the death of Trajano and ordered her to pay his family $4.16 million in damages.

“Now she is in the Senate,” Catling said. “It is frightening that her power is growing.”

Senator Marcos could not be immediately reached for comment.

Justine Balane, Akbayan Youth secretary general, said talks had been held with student organizations in Admu, Pamantasan ng Lungsod ng Maynila and Polytechnic University of the Philippines for them to also sign the anti-Marcos resolution.

“Hopefully [the resolutions] will be submitted for approval to our respective [school] administrations,” Balane said. “We are really drawing the line against the Marcoses while they are unrepentant and unaccountable.”

Aside from Imee and Irene Marcos, the student leaders also seek to bar the late dictator’s widow, Imelda, and son, former Sen. Bongbong Marcos, from setting foot on their campuses “by virtue of their past and present human and students’ rights violations.”

“Be it further resolved that the said Marcoses be denied entry to said educational institutions as they pose a threat to students’ democratic involvement and participation in civic, social and political affairs,” the resolution said.

UP Diliman on Thursday also held, for the second consecutive year, a “Day of Remembrance” to commemorate the Sept. 21, 1972, declaration of martial law.

The first time it was held in 2018, the occasion also served to convey the UP community’s reaction to Imee turning up on the Diliman campus for a reunion of KB officials, a gathering also attended by the state university’s president, Danilo Concepcion.

Earlier this week, the UP College of Arts and Letters also approved a new subject in its curriculum—Philippine Studies 21—which will delve into the “language, literature and culture” during the martial law years under Marcos. The university also announced that a design had been chosen for the martial law museum that will soon be built on the Diliman campus.

Like the student leaders, Chuck Crisanto, head of the Human Rights Violations Victims’ Memorial Commission, lamented during Thursday’s event that no one had been convicted for the atrocities committed during martial law.

“Now, what does that mean?” he told the Inquirer. “It means that … what you now see is the culture of impunity. Since no one was [held] accountable in the past, then maybe most [members] of the security sector now feel they will be insulated in the present.”

UP Diliman Chancellor Michael Tan, in a message delivered during the program, stressed the need for vigilance because the “military and police do remember—and recycle—old tactics.”

TAGS: Ferdinand Marcos, Graft and Corruption, Mapua, Marcos, University of the Philippines, UP