LONDON – Families stranded, honeymoons and vacations canceled, thousands of workers laid off: The sudden collapse of British tour company Thomas Cook and its network of airlines and hotels sowed chaos for hundreds of thousands of travelers and businesses around the world Monday. 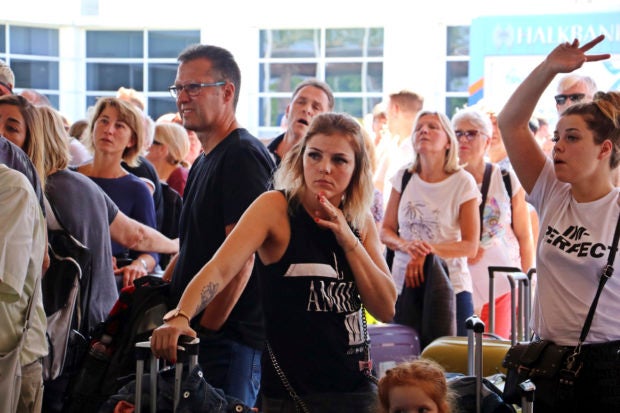 Brought down by a variety of factors, including crushing debts and online competition, the 178-year-old travel agency that helped pioneer the package tour ceased operating in the middle of the night. Its four airlines stopped carrying customers, and its 21,000 employees in 16 countries lost their jobs.

The company’s failure rippled across the tourism industry, particularly around the Mediterranean, with travelers uncertain how they would get home, hotels worried they wouldn’t get paid, guests afraid they wouldn’t be allowed to check out without settling their bills, and resorts hit with cancellations.

Overall, about 600,000 people were traveling with Thomas Cook as of Sunday, though it was unclear how many would be left stranded, as some regional subsidiaries were in talks with local authorities to continue operating.

The British government swung into action, lining up flights to bring an estimated 150,000 Britain-based customers back home from vacation spots around the globe in what was called the biggest peacetime repatriation effort in the country’s history.

James Egerton-Stanbridge and his wife, Kim, were set to fly from London’s Gatwick Airport to Egypt to celebrate her 60th birthday when flights were grounded.

“Kim was crying this morning. We’re devastated,” he said.

Long lines of British tourists snaked through the terminal in the Mexican resort of Cancun as travelers waited to find out when they could return home, and some discovered they would be taken to cities hours from their homes. 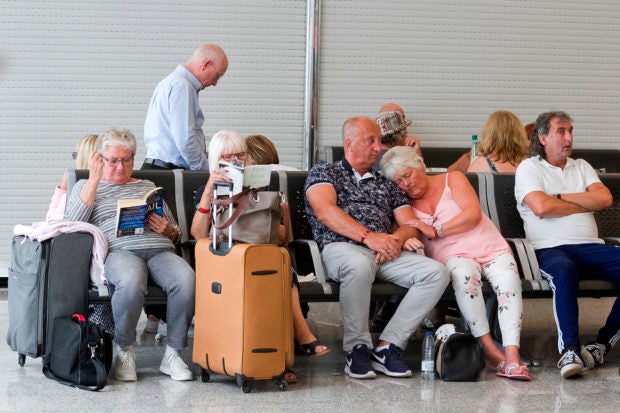 Katie Cowdrey, her husband and 6-year-old son had been scheduled to end their two-week vacation Monday anyway, but instead of flying home to London, they were told a plane would take them to Manchester.

“There’s chaos as you can see. No one knows what’s going on,” Cowdrey said. “We only found out from the news. We weren’t told any other way. The hotel didn’t know what was going on.”

Others took the news in stride. Sweden’s Bengt Olsson, who was traveling in Cyprus, said there were worse places to be stranded: “It’s nice to stay here. It’s warm.”

The reality was far harsher for the Thomas Cook employees who lost their jobs overnight.

“The staff have been stabbed in the back without a second’s thought,” said Brian Strutton, head of the British Airline Pilots’ Association.

An estimated 1 million customers also found their bookings for upcoming trips canceled. Many of them are likely to receive refunds under travel insurance plans but had no idea when they would get their money back. Thomas Cook said it served 22 million customers a year.

The company, which began in 1841 with one-day train excursions in England, grew to have travel operations around the world but has been struggling for years because of competition from budget airlines and low-cost online booking sites.

In contrast to internet sites, Thomas Cook had high fixed costs: It operated a fleet of 105 jets and owned about 550 travel agencies on major streets across Britain as well as 200 hotels in sun-drenched countries.

“The growing popularity of the pick-and-mix type of travel that allows consumers to book their holiday packages separately, as well as new kids on the block like Airbnb, has seen the travel industry change beyond all recognition in the past decade, as consumers book travel, accommodation, and car hire independently,” said Michael Hewson, chief market analyst at CMC Markets.

Business was also hurt in recent years by terror attacks in the Middle East and heat waves in Northern Europe that led people to stay home.

Things got worse this year, with the company blaming a slowdown in bookings on uncertainty over Britain’s impending departure from the European Union. A drop in the pound also made it more expensive for Britons to travel abroad.

While many of these factors also affected rival companies, Thomas Cook was also burdened by $2 billion in debt. It was seeking 200 million pounds ($250 million) to avoid going bust and held talks over the weekend with shareholders and creditors.

CEO Peter Fankhauser stood outside the company’s offices before dawn and announced that the effort to stave off collapse had failed.

“I know that this outcome will be devastating to many people and will cause a lot of anxiety, stress and disruption,” he said.

British authorities chartered dozens of aircraft to fly customers home free of charge over the next two weeks, but warned of delays and urged patience.

British Prime Minister Boris Johnson, who was traveling to New York for a meeting at the United Nations, said the government was right not to bail out the company, arguing that doing so could have led other businesses to expect the same treatment.

Most of Thomas Cook’s customers from Britain are protected by the government-run travel insurance program, which makes sure vacationers can get home if a British-based tour operator fails while they are abroad.

In Germany, the government was considering a request for a bridge loan from Thomas Cook’s unit there, the airline Condor. The subsidiary was still flying but stopped carrying Thomas Cook customers.

Thomas Cook’s collapse is also a blow to the many companies in resort areas that have long relied on it for business, including some 3,150 hotels.

In Spain’s Canary Islands, a favored year-round destination for Europeans, the association of hotels said it feared an economic hit. The Spanish government held meetings with regional authorities to assess the damage.

In Tunisia, the TAP news agency said the tourism minister intervened after reports that some Thomas Cook tourists in Hammamet were locked into a hotel and “being held hostage” as hotel staff demanded they pay extra. The government said the situation was resolved and the guests would not be prevented from leaving the country. /gsg