MERIDA, Venezuela  — Blackouts shut off the refrigerators where the scientists keep their lab samples. Gas shortages mean they sometimes have to work from home. They even reuse sheets of paper to record field data because fresh supplies are so scarce.

As their country falls apart, a hardy team of scientists in Venezuela is determined to transcend the political and economic turmoil to record what happens as the country’s last glacier vanishes.

Temperatures are warming faster at the Earth’s higher elevations than in lowlands, and scientists predict that the glacier — an ice sheet in the Andes Mountains — could be gone within two decades.

“If we left and came back in 20 years, we would have missed it,” says Luis Daniel Llambí, a mountain ecologist at the University of the Andes in Mérida.

Scientists say Venezuela will be the first country in South America to lose all its glaciers.

Throughout history, glaciers have waxed and waned numerous times. But the rapid pace of glacial retreat over the past century and a half, accelerated by human activities and the burning of fossil fuels, creates a new urgency — and opportunity — for scientists to understand how freshly exposed rock forms new soil and eventually new ecosystems.

While most of the planet’s ice is stored in the polar regions, there also are glaciers in some mountainous regions of the tropics — primarily in South America.

“Practically all of the high-mountain tropical glaciers are in the Andes. There’s still a little bit on Mount Kilimanjaro,” says Robert Hofstede, a tropical ecologist in Ecuador who advises international agencies such as the World Bank and United Nations. 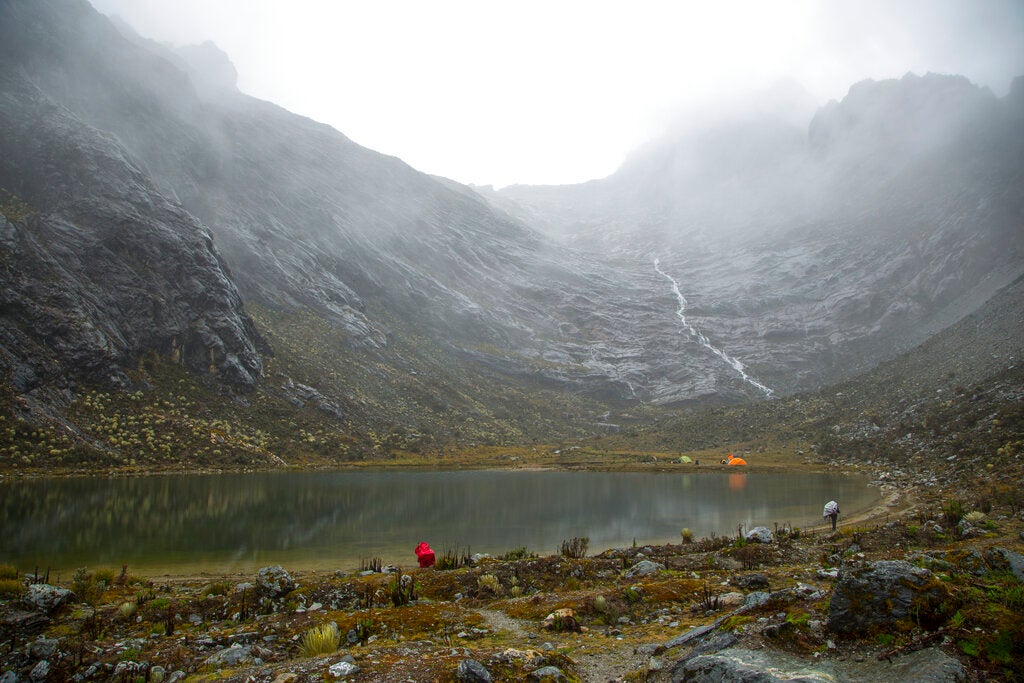 Scientists gather at their camp late afternoon at the “El Suero” lagoon, during the first day of their mission to the Humboldt glacier.  (AP)

Monitoring Venezuela’s Humboldt glacier depends on continuous visits, Llambí notes. And even in the best of circumstances, it’s no easy trek from the small mountain town of Mérida to the ice sheet perched within Venezuela’s Sierra Nevada National Park at nearly 16,500 feet (5,000 meters) above sea level.

When Llambí and three other scientists made the journey this spring to scout out mountain terrain for a new research project, they first rode a cable car, then walked a full day to the base camp, pitching their tents in drizzling rain.

Each day, they then had to climb an additional three hours to reach the glacier, at times donning helmets and holding tight to ropes to maneuver up steep boulders. Some of the scientists had waterproofed their worn-out old boots using melted candle wax.

Mountain fieldwork always is physically grueling, but the deepening crisis in Venezuela since the death of former president Hugo Chavez in 2013 has transformed even simple tasks into immense hurdles.

“Things that you normally take for granted for research — internet, gas, electricity — all become scarce and unpredictable,” Llambí says.

‘We have to be there’

Perhaps the hardest toll has been watching many of their colleagues and students leave, joining the more than 4 million people who have fled Venezuela’s political upheaval in recent years.

“Every week, someone asks me why I haven’t left,” says Alejandra Melfo, a team member who is a physicist at the University of the Andes.

Not now, she tells anyone who asks.

“Climate change is real and has to be documented,” she says. “We have to be there.”

The Institute of Environmental and Ecological Sciences at the University of the Andes was founded 50 years ago, in 1969, and the scientists there see themselves as custodians of long-term data monitoring how temperatures and plant life are changing in the region, including in the Andean ecosystem known as the paramos — a mist-covered mountain grassland that lies between the top of the treeline and the bottom of the glacier.

While most tundras have sparse vegetation, the paramos is famous for striking plants called frailejones that can be taller than humans and resemble a cross between a cactus and a palm tree. These mountain grasslands also store and release water that sustains the cities and croplands further downslope.

It’s hard to overstate the importance of the Andean glaciers in maintaining regional water cycles.

“More than 50 million people in South America rely on water provision from the Andes,” says Francisco Cuesta, a tropical ecologist at the University of the Americas in Quito, Ecuador, who marvels at the dogged work the team is doing under such punishing conditions.

“To me, it’s incredible that they are still doing research there,” Cuesta says. 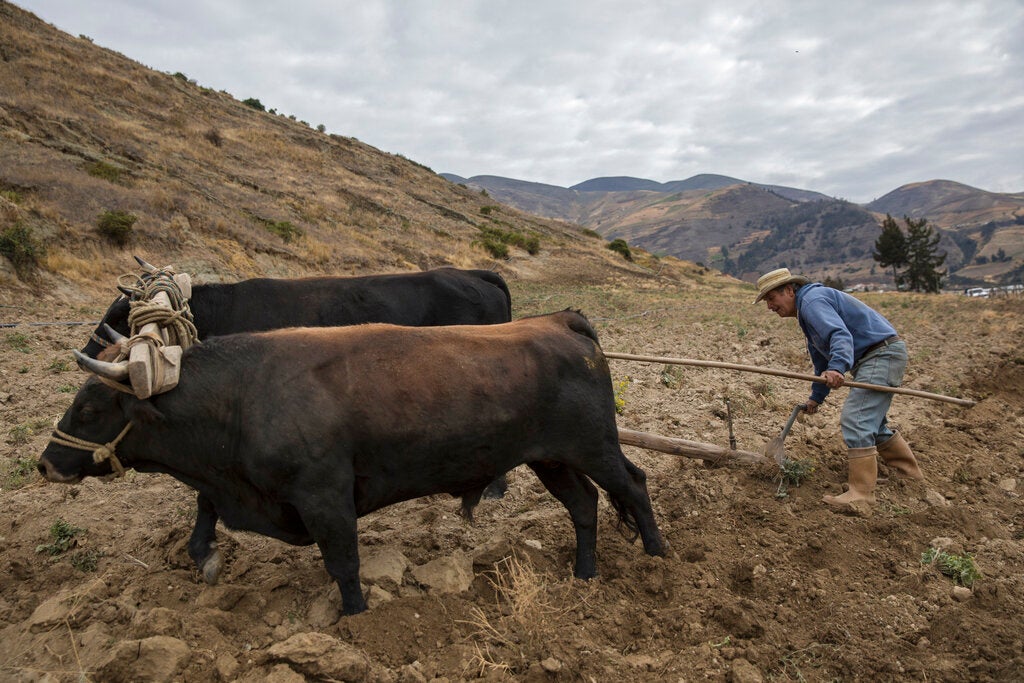 A farmer uses a plow in Merida, Venezuela, as scientists start a mission to study how temperatures and plant life are changing in the Andean ecosystem known as the paramos. (AP)

The region is one of the front lines of climate change. Glaciers in the tropical Andes have been retreating faster than most other glaciers since scientists began keeping detailed records in the 1970s, because tropical latitudes get more direct sunlight and radiation.

When a glacier melts away, at first only bedrock is left behind — sometimes rough gravel and sometimes smooth rock, worn down by centuries or millenniums of grinding ice.

But within a few years or decades, bacteria and lichen began to colonize the area. As they decompose the minerals of the rock and their bodies then decay into organic matter, the first hints of soil begin to form. And soil is the basis of a new ecosystem, providing a structure to retain water and for plant roots to grow.

“The formation of soil is the difference between an ecosystem being able to form quickly and being stalled for hundreds of years,” Llambí says.

On the rocks left behind when the glacier retreats, the scientists think that a new ecosystem resembling the paramos may eventually begin to develop. But there are many questions still to answer: Will it take decades to form new soil? Can plant and animal species that thrive at lower elevations also survive further upslope? Will they be able to adapt to continually changing temperatures?

Venezuela has the world’s largest known oil reserves, but an economy hitched for decades to global oil demand has proven unstable. Llambí believes he has a special obligation to help inform the public of the impacts of climate change in a country where the boom-and-bust cycle of fossil fuel exploration has shaped nearly everyone’s life.

“Our university is in Mérida, which has long been called ‘the city of eternal snow,'” he reflects. “We are discovering that ‘eternity’ is not forever, and that’s what we have to get used to in a world with climate change.” 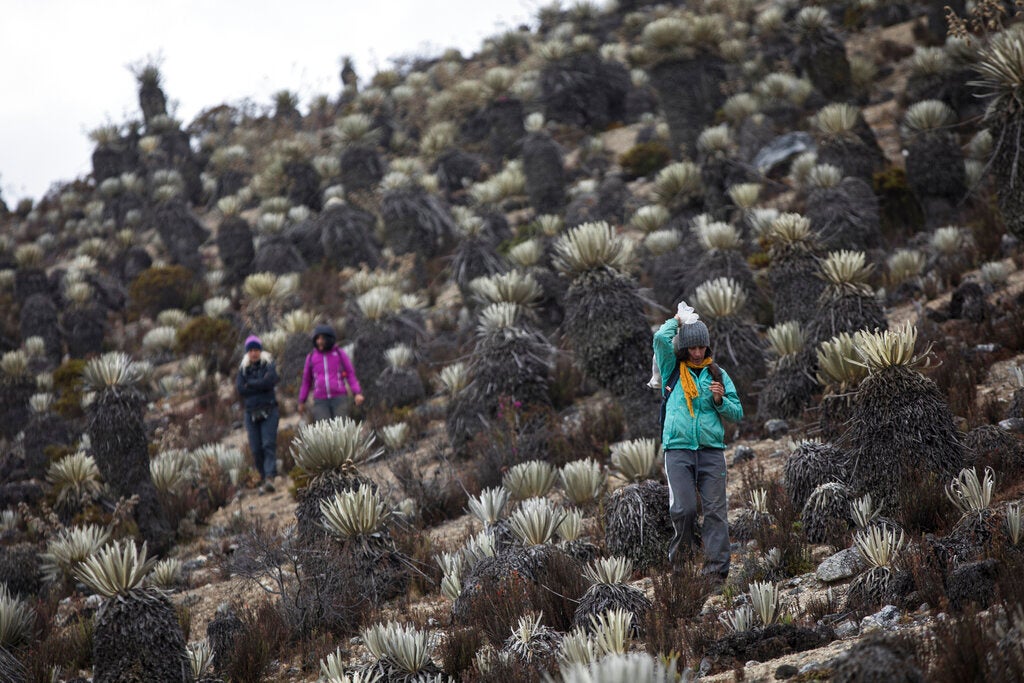 Scientists hike during a mission to study how temperatures and plant life are changing in the Andean ecosystem. (AP)

Earth’s future is being written in fast-melting Greenland