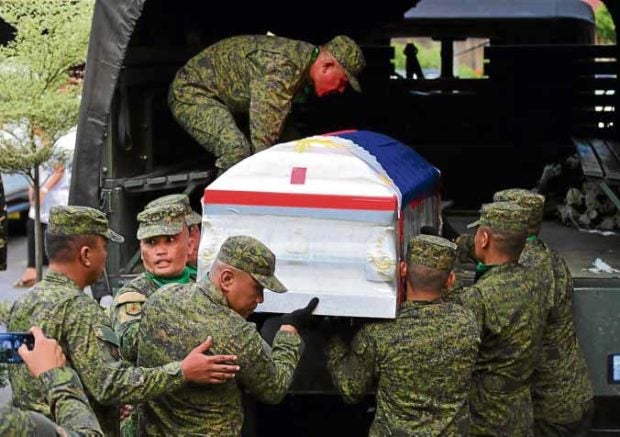 In a radio interview on Sunday, Maj. Reynan Afan, spokesperson for the PMA, said two cadets third class had been sent to the stockade and a cadet first class was being held at the holding center at Fort Gregorio del Pilar in Baguio City.

Afan said the two cadets in the stockade were suspected of having direct involvement in the hazing of Dormitorio, while the other was being investigated for his role in the beating and eventual death of the plebe.

He did not identify the three cadets.

Col. Allen Rae Co, the Baguio City police chief, elevated the three cadets to suspects and referred to two other cadets as persons of interest in the investigation of the case.

Co did not name the persons of interest.

Afan said the PMA was concentrating on identifying all people involved whether as participants or as witnesses to the hazing of Dormitorio.

He said the PMA referred the case to the Philippine National Police from the start.

“We cordoned off the area and secured all persons who may have information on the matter. We directed all of them to cooperate with the investigat[ive] agencies to ensure that the probe gets results,” Afan said.

In a statement on Sunday, Madrigal expressed his condolences to Dormitorio’s family and gave assurances that the PMA was conducting a “thorough and speedy investigation.”

“We will also hand over those responsible to proper authorities and let the wheel of justice turn,” he added.

Madrigal, who is retiring on Sept. 28, stressed that the military does not tolerate any act that endangers soldiers, “more so future leaders of our organization.”

He said the military would take steps “to ensure that this tragic incident is properly investigated and to prevent it from happening again.”

A member of PMA Class of 2023, Dormitorio is a son of retired Army Col. William Dormitorio, who graduated from the academy in 1974.

Lt. Gen. Ronnie Evangelista, the PMA superintendent, said the medicolegal examination found signs of blunt force trauma on the cadet’s body, indicating maltreatment that resulted in his death, the first in the academy in 18 years.

It is unclear when Dormitorio was hazed.

A source in the academy said the student was admitted to the PMA hospital two weeks ago after he complained of stomach pains.

The source did not say how long Dormitorio stayed in the hospital and what the findings were.

Recurring stomach pains sent Dormitorio back to the hospital on Tuesday. He was found to have urinary tract infection and was discharged.

Evangelista said on Friday that Dormitorio was sick throughout Tuesday, but was not taken back to the hospital until 4 a.m. on Wednesday. He died an hour later.

A letter to his family he had asked other cadets to put in the mail for him indicated Dormitorio was hospitalized in mid-August.

Dormitorio wrote that he was confined in the hospital, but did not say what was ailing him.

The undated letter must have been written in the third week of August or earlier, as the cadet said he expected to be discharged by Aug. 26.

Hazing is banned in Philippine schools. Last year, President Rodrigo Duterte signed a new law that imposes heavier penalties on hazers and also punishes people who cover up the crime.

On Saturday, Cagayan de Oro Rep. Rufus Rodriguez said he had filed a resolution for a House probe into Dormitorio’s hazing death.

Dormitorio’s body lies in state in a flag-draped coffin at a funeral home in Cagayan de Oro City. He will be buried on Tuesday.

His family asked the PMA on Saturday to make his death the last in the premier military school.

“It’s not good to know that cadets who are willing to serve our country die during their training,” said Mayor Omaradji Pizarro of Kalinangan, Bukidnon province, Dormitorio’s uncle.

“What we demand to know is why these upperclassmen are so sadistic, barbaric, very cruel, when in fact, they (junior cadets) will soon be their comrades,” Pizarro said. —With a report from Jigger J. Jerusalem