Diokno: Docu on drug war could be used vs Duterte 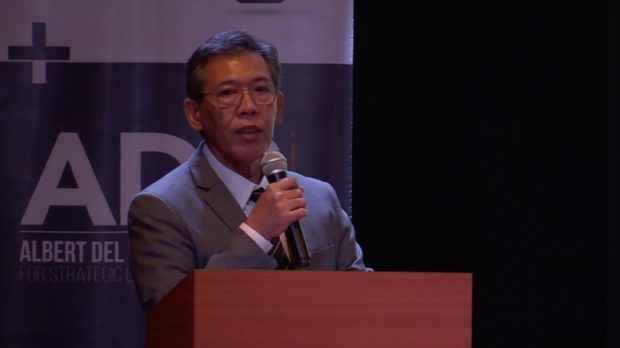 MANILA, Philippines — A documentary on the Philippines’ drug war that has been criticized by Malacañang can be used against President Rodrigo Duterte before the International Criminal Court (ICC).

This is what impressed human rights lawyer Jose Manuel “Chel” Diokno on watching “On the President’s Orders” at its Philippine premiere on Sept. 20.

“On the President’s Orders” is the first full-length documentary of the drug war on President Duterte’s watch. The film was made by Emmy award-winning filmmakers James Jones and Olivier Sarbil for the US television program “Frontline.”

The film’s Philippine premiere at the Film Center of the University of the Philippines was scheduled on the eve of the 47th anniversary of Ferdinand Marcos’ proclamation of martial law (its actual enforcement was on Sept. 23, 1972).

Observers have drawn parallels between President Duterte’s drug war and the martial law regime of the dictator Marcos.

Executive director Leni Velasco of Active Vista, which organized the International Human Rights Film Festival including Friday’s screening, cited such factors as the suppression of human rights and erosion of institutions.

For Diokno, who joined a panel of human rights advocates after the screening, any law student “could easily identify 20, 30, 40, even 50 violations” of the law just by watching the film.

Diokno even argued that the film could be presented before the ICC, which has begun to look into the drug war during President Duterte’s watch.

“In ICC cases, they have accepted press reports. But this film comes directly from the mouths of the officials,” Diokno said.

Jones, in an earlier interview with the Inquirer, said the police officials featured in the film “genuinely believed that the deaths were working and that the drug war is working.

Speaking to the audience via recorded video last Friday, Jones said Col. Jemar Modequillo, then Caloocan police chief, and Capt. Octavio Deimos, then the head of the Caloocan Special Weapons and Tactics team, “submitted themselves to cinematic scrutiny” even after the police had been sidelined in the drug war, following accusations of human rights violations.

Jones and Sarbil documented the city police at a time when Caloocan gained notoriety as a “killing field” in the drug war.

Modequillo had just been named chief of a police force plucked mostly from the regional police’s reserves, after the old ones were sacked in the aftermath of the deaths of teenagers Kian delos Santos, Carl Angelo Arnaiz and Reynaldo “Kulot” de Guzman, all in 2017.

Modequillo, who Jones said “loves the attention” and was a “charismatic character,” allowed the filmmakers access to nearly everything. This enabled them to capture the police as they descended into increasingly questionable behavior, as shown in the documentary.

In one scene, Deimos was shown on night patrol, stopping two boys, who looked no more than 15, on their way home.

One of the boys had another shirt tucked into his shorts with a print of a Nazarene image that bore the fifth commandment “Thou shall not kill.”

This scene elicited a nervous laughter among the audience.

“Maybe you are the one killing out here, huh,” Deimos said to the boy apparently as a joke.

In another scene, jail warden Master Sgt. Adolfo Agustin laughed as he hit a detainee’s hands with a heavy piece of wood.

“When the police kill, it’s legitimate… We are the enforcers of the law,” Deimos said in the film.

Diokno flagged these actual scenes in the documentary as “violations, if not of domestic laws, then of the international covenants and obligations.”

“Even our drug laws have very strict requirements for conducting searches, for taking inventories. Just stopping them on the streets and ordering them to remove what’s in their pocket [is not allowed],” he said.

But holding abusive policemen liable is difficult when the President himself has assured them immunity, said Human Rights Watch researcher Carlos Conde.

“The lesson of Duterte is that we not only allowed him to happen, we encouraged him to happen,” Conde said. “A lot of that has to do with our ignorance, with our stupidity, with our willingness to swallow whatever it is that he is telling us.”

Both Conde and Diokno believe it is necessary to document such violations as shown in the film.

He added, “I hope that when this madness ends, we will not make the same mistake as [when] the previous madness ended in 1986 and forgot to make and ensure that those people were held accountable.”