A Chinese tourist closed the valves of two scuba divers’ oxygen tanks as a joke, while they were on a group diving trip in Puerto Galera, Mindoro. 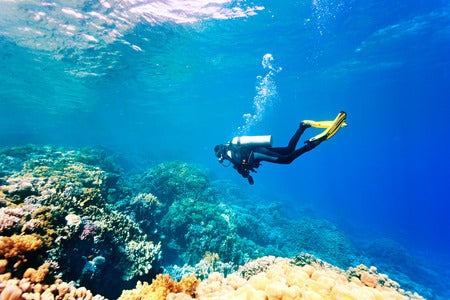 He first played the “prank” on a diver, who was only identified in the report as Yu, last Wednesday, Sept. 11. Yu was already 15 meters below the water’s surface when he suddenly experienced difficulty in breathing.

He signaled to his instructor for help. The guide gave Yu his back up tank and reopened Yu’s tank after inspecting it.

“I didn’t notice anything at the time when the tank valve was actually closed,” Yu was quoted as saying. “But when I couldn’t breathe I knew immediately that someone must have closed it.”

Another diver reportedly saw the man attempt to meddle with Yu’s tank for a second time. This man was later identified as Tighe Lau, from Shanghai, China. Prior to the incident, Yu said Lau had already threatened to close his oxygen tank’s valve.

The following day, Lau transferred to a new group and did the same “prank” to another diver. The diver was identified in the report as Donghai.

Donghai realized Lau closed his tank’s valve when he suddenly had a hard time breathing while he was 10 meters deep in the waters. He had to use his partner’s tank while the said companion helped reopen his tank’s valve. Following this incident, Donghai complained to the group’s instructor about Lau’s behavior.

Lau apologized in the same day, according to a screenshot of a group chat on the social media platform WeChat. He stated that what he did was “just a prank done without thinking of the consequences.”

Yu did not accept the apology, as per report, saying, “it’s like stabbing someone with a knife and then saying it’s a joke.”

Following Yu’s rejection, Lau took to the social media platform again last Friday, Sept. 13, to apologize anew. He said he was sorry for “putting these two divers’ lives in danger.” As per report, Donghai responded by saying he was in talks with a lawyer in China regarding the matter.

The Chinese headquarters of scuba training agency SDI TDI ERDI stated that they had no record of Lau having a scuba diving license, last Monday. It is not stated in the report if Lau obtained a diving license from a different training and certification center. Ryan Arcadio/JB