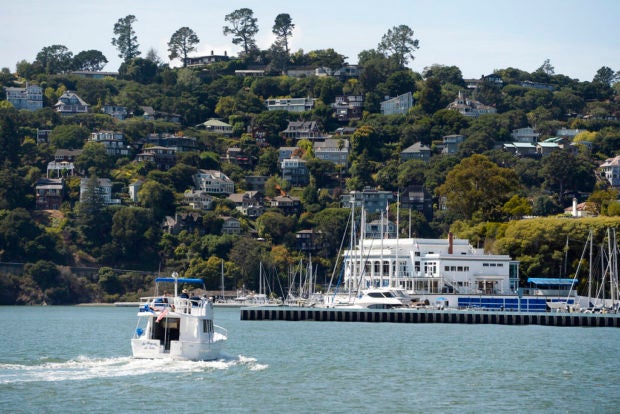 A boat motors toward the Corinthian Yacht Club in Tiburon, California, Monday, Sept. 16, 2019, with the town of Belvedere on the hill in the background. A Belvedere father was arrested on manslaughter charges after his 11-year-old son was thrown overboard a boat in the San Francisco Bay and killed after being struck by the vessel, police said. (Alan Dep/Marin Independent Journal via AP)

TIBURON, California — A member of one of Mexico’s wealthiest families was arrested on manslaughter charges after his 11-year-old son died on a family boating trip in the San Francisco Bay, police said Monday.

Javier A. Burillo, 57, was arrested Sunday at his multimillion-dollar home in the bay front community of Belvedere on suspicion of vehicular manslaughter with a vessel, willful harm or injury to a child and operating a boat while under the influence, Tiburon Police Chief Michael Cronin said.

Burillo was driving the boat with his two sons, aged 11 and 27, aboard on Sunday. Both sons fell off the boat in open waters near Angel Island, north of San Francisco, Cronin said. Investigators believe they were thrown overboard when the boat hit a wave, said Cronin.

He said Burillo helped bring the two back aboard and transported them to the Corinthian Yacht Club in Tiburon, where the 11-year-old boy was pronounced dead.

Cronin said Burillo was also the one who called authorities around 7 p.m. Sunday.

“I know him as Javier Burillo,” Cronin said, adding that the developer is a well-known and liked member of the Tiburon-Belvedere community.

Burillo’s older son had cuts to his leg and was transported to a hospital. He spoke to investigators but Cronin wouldn’t say what he told them.

“It’s a tragedy. We’re all heartsick about it. The community is shocked,” he said.

U.S. property records show Burillo’s Marin County home was purchased in 2004 for $10.2 million. U.S. records show he and his wife, Rose, also own properties in San Diego and Sausalito.

A New York Times story about his February 1989 wedding to Alejandra Aleman, the daughter of late Mexican President Miguel Aleman, said that at the time he owned Casa de Campo, a resort and restaurant in Cuernavaca, the Hotel Ritz in Acapulco, and other real-estate holdings. /jpv