newsinfo / Headlines
Headlines
FEAST OF OUR LADY OF PEÑAFRANCIA 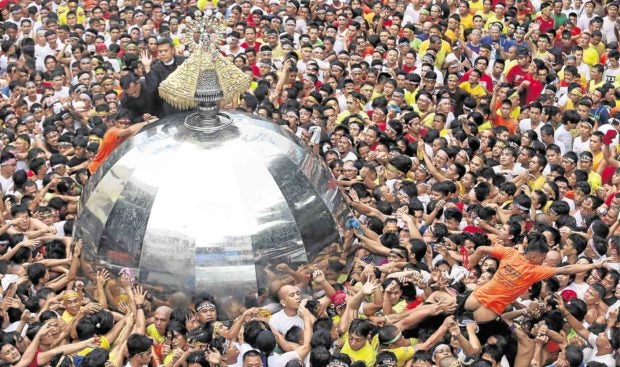 DEVOTION Devotees fight for space as they try to get near the carriage of Our Lady of Peñafrancia, Bicol region’s patroness, during the “traslacion” (Marian procession) in Naga City on Sept. 13. The Peñafrancia festival is one of the biggest religious feasts in the country. —MARK ALVIC ESPLANA

NAGA CITY, Camarines Sur, Philippines — Thousands of devotees and pilgrims gathered in this city in Camarines Sur province last week for the beginning of the 309th year of devotion to Our Lady of Peñafrancia, offering prayers for thanksgiving, peace and good harvest.

The six-hour “traslacion” (Marian procession) on Sept. 13, which started at the Peñafrancia shrine here, transferred the image of the Virgin Mary (called “Ina” by devotees) to Naga Metropolitan Cathedral. It marked the beginning of the nine-day novena for the Feast of Peñafrancia, which will end on Sept. 21 with a fluvial procession along the Naga River.

Estepen Flores, 59, a rice farmer and Ina devotee for 15 years, said his only prayer was for a good harvest next month, especially that palay (unhusked rice) prices were dropping.

He said “ata” (rice husk) fetched a higher price at P12 per kilo than palay, which they sell for only P10 per kilo.

“[This] favors the businessmen,” he added.

The National Democratic Front of the Philippines (NDFP) in Bicol said the group was one with devotees in asking Ina to intercede in bringing justice to the oppressed and to achieve lasting peace in the country.

In a statement, Maria Roja Banua, NDFP regional spokesperson, said the Bicol patroness had, for several centuries, been a medium in seeking justice, peace, change and prosperity.

Renne Gumba, head of Naga’s public safety office, said more than 500,000 devotees and guests filled the city’s streets for the traslacion on Friday.

He said city officials were expecting the number of devotees and visitors to reach 1 million on the days leading to the fluvial procession on Saturday, when the image of Ina is returned to its official home at the minor basilica of Our Lady of Peñafrancia.

Gumba, who chairs the joint operation center for Peñafrancia festivities, said more than 3,000 policemen and soldiers were tapped for security, emergency and peace and order for the feast of Bicol’s patroness.

An 11-day gun ban had been imposed in Naga City starting Sept. 11. Sale and consumption of liquor were also prohibited during the religious festival.

Being “youthful” was being “open to change, to be ongoing in our conversion to the Lord,” he said.

Badiola, quoting Pope Francis, said that being young meant having a heart capable of loving. “[Ina] lived with a youthful heart and with the energy of true youthfulness,” he added.

“With this disposition in our hearts, difficulties may come, but our strength comes from our God,” Tirona said. —Reports from Stephanie Florida, Rey Anthony Ostria and Mar Arguelles

TAGS: Feast of Our Lady of Peñafrancia, Virgin Mary