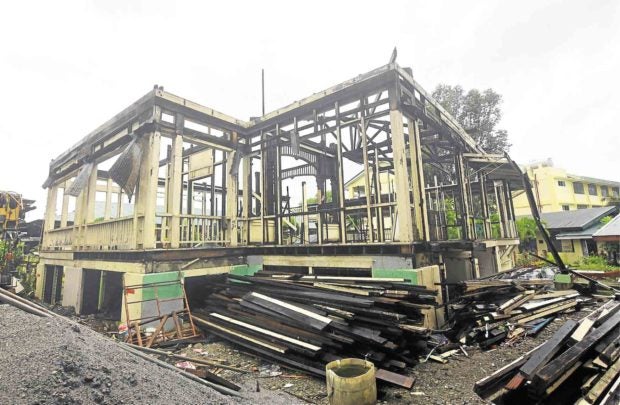 PRESERVING HISTORY Graduates of West Central Elementary School in Dagupan City want the Department of Education to keep the original design of the school’s home economics building, which Gen. Douglas MacArthur used as headquarters during World War II, as it restores the two-story structure. WILLIE LOMIBAO

DAGUPAN CITY, Pangasinan, Philippines — An official of the Department of Education (DepEd) admitted that the agency committed lapses when it tore down a schoolhouse that briefly served as the headquarters here of Gen. Douglas MacArthur during World War II.

Education Undersecretary Alain Pascua apologized to city officials and residents for the lapses that resulted in “uproar, anxiety, inconvenience and frustrations of our ‘kababayan’ (townmates).”

The two-story house was under the DepEd’s heritage school building restoration program and had already been stripped of its roof and wooden floors when Mayor Brian Lim ordered the agency to stop the dismantling last week.

Some residents and local officials earlier turned to social media to oppose the dismantling of the wooden structure that housed the home economics classrooms at West Central Elementary School.

The house gained historical prominence when MacArthur and his men stayed there after they arrived in Lingayen town in 1945 to continue their campaign to liberate the country from Japanese occupation.

Pascua last week sent a team to investigate the restoration and the group found out that the project did not have a construction permit.

He said the community and local officials were neither consulted about the restoration plan, part of the DepEd’s program to preserve Gabaldon schoolhouses and other heritage buildings.

Gabaldon schoolhouses were built during the first decades of the American colonial rule.

DepEd officials earlier said the house needed restoration because 80 percent of it was damaged and its posts, beams, girders, floors and trusses showed severe termite infestation.

There was also the need to raise the floor level to more than a meter to avoid future deterioration resulting from perennial flooding.